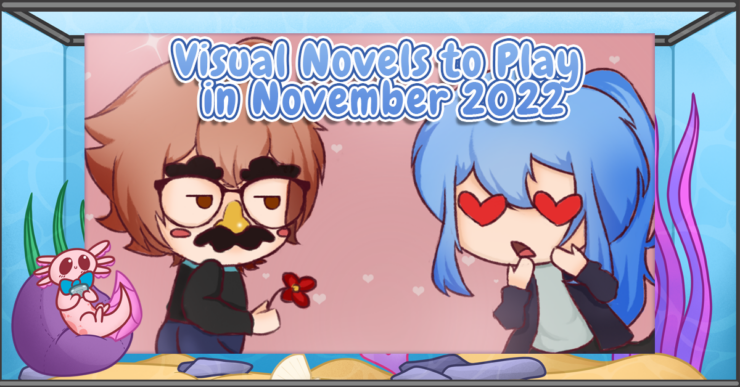 Visual Novels to Play in November 2022

You need to play these games!

With visual novels being released every week on places like itch.io and Steam, it can be hard to keep track of every single release. Sometimes, with so many releases, some games get buried under others. Today, I wanted to highlight some of the great visual novels that you should play this month that you may have missed over the course of the year.

Players were able to get a taste of what developer Hollow Rose Studios has in store for them with a demo build of An Everyday Love that was released for Otome Jam 2022 earlier this year, and the full game was released earlier this month. You play as a young woman who has a stable job as a marketing assistant. It gives her enough money to live comfortably, yet it doesn’t really make her happy. She wishes for love and to work on her novel.

Her life starts to change when she’s given an assignment at work, where she can do a project with one of her co-workers, Ezra or Logan, or do a presentation by herself, which opens up the door to befriend a personal trainer named Adrian. This seemingly normal work task unknowingly opens up the door for love and the chance to pursue her dream of finally finishing that novel our protagonist has put on the wayside. Will she be successful and find love, no matter how much hardship comes her way?

An Everyday Love is a really down-to-earth and touching game. The writing is well-done, being funny but also careful and thoughtful when it needs to be. If you want a game that will definitely tick off all the boxes for you when it comes to a well-done slice-of-life game, I strongly recommend checking out An Everyday Love.

Don’t Give Up on Me!

Confessing to your crush is hard. You don’t know how it’s going to go, and it’s one of the most nerve-wracking things people go through. Well, in Don’t Give Up on Me!, trying to confess your love is even harder. In this game, you play as Akihiko, a young man who loves his friend Aoi. The game tells the tale of Akihiko trying to confess his feelings to Aoi, but his confession goes wrong every time. Sometimes it’s Akihiko’s own nerves, but other times, it’s a plane crashing into a gas station. It’s absurd, but the game owns up to the chaos that ensues in its story.

The game features eye-catching and adorable art. I really dug the sprite work especially, particularly Akihiko and Aoi’s designs. As I mentioned earlier, the game’s tone is comedic. There were a couple of times I laughed out loud at the strange turn of events or the characters themselves, like Akihiko’s friend Tsuki, who appears a few times in the story, who pitches nonsensical and horrible plans to Akihiko. If you are in need of a good laugh, Don’t Give Up on Me! is a perfect game for that.

As the saying goes, the only things guaranteed in life are death and taxes. Inspired by classic RPGs like Fire Emblem, Golden Sun, and Final Fantasy, in Elven Revenue Service, you run a tavern which you have to pay taxes for. So your job is to earn money by building relationships with your clientele, managing your bar’s inventory, and making the correct choices to build a prosperous business so you don’t go to jail for tax evasion.

There’s a lot going for this game. Planned to have 30+ endings and seven characters (who you can pursue romantic or platonic relationships with), there’s a lot that will influence how your playthrough goes once the full game releases. As mentioned before, you need to maintain your bar. This entails buying enough product to make a profit, the latter of which can influence your ending. Having money will also allow you to make certain choices throughout the game, which can help you get closer to people or maybe get out of sticky situations. You also have random events that happen every night at your bar. Participating in these events can help you or put you at a disadvantage, so you need to be wise about what you do.

Overall, I think Elven Revenue Service has a lot of promise! It definitely gave me that 16-bit vibe that it was going for, and it reminded me of Recettear: An Item Shop’s Tale and Potionomics, both games where you’re running shops and have to pay debts of some kind, although in this game you need to make sure you pay your taxes. Fans of management games and those who fell in love with the games of yesteryear will find something whimsical about this interesting title.

Inspired by Princess Maker and Alter Ego, in Mushroom Musume you take control of a hermit who desires to raise a daughter of their own. Their wish is granted as they are given a pot with a mushroom growing out of it, this mushroom being a young girl. Those who’ve played the games that inspired Mushroom Musume and Long Live the Queen will find themselves in familiar territory here as you’ll be tasked with raising your strange mushroom daughter in hopes she’ll live a proper life. However, parenting is never that easy. Your daughter will have traits and stats you need to be mindful of. These can be raised through choices. But be careful of what you decide to do, because while some choices may be beneficial, they could also lead your daughter to an early grave if you aren’t careful.

The game also has a unique aesthetic, resembling old DOS games. You can obtain different color palettes by playing through the game and switch between them however you please, just like in World of Horror.

Mushroom Musume is currently in development and the developers are actively updating the game with more content. If you’re craving another stat-raiser and life sim, I highly suggest checking it out!

In this dark fantasy visual novel, you’ll play as several protagonists, such as Lily Flowerberry, Warren Monkshood, and Lewis Monkshood, to name a few. You’re all on a journey to try find a wizard who’s gone missing. However, the journey won’t be easy. After all, when is it? The game is riddled with political intrigue and fantastical creatures like fae, lycan, and vampires, some of whom are at odds with each other. The question is, despite their differences, will our protagonists be able to put that aside in order to find their friend? Or will they let their hatred blind them into making choices that could cost them their lives?

The game features voice acting, which is done fairly well, so kudos to the entire voice cast who took part. The game, if it wasn’t made obvious by the numerous playable protagonists, features a lot of choices and possible endings. If you want to get an understanding of what’s truly going on, the game recommends playing through the various different scenes to try and piece together the story. There’s a lot of content to digest in this fantasy game that will quickly get dark if you make the wrong decision. So, if you’re a fan of political intrigue and the fantasy genre, you shouldn’t pass up Royal Duality.