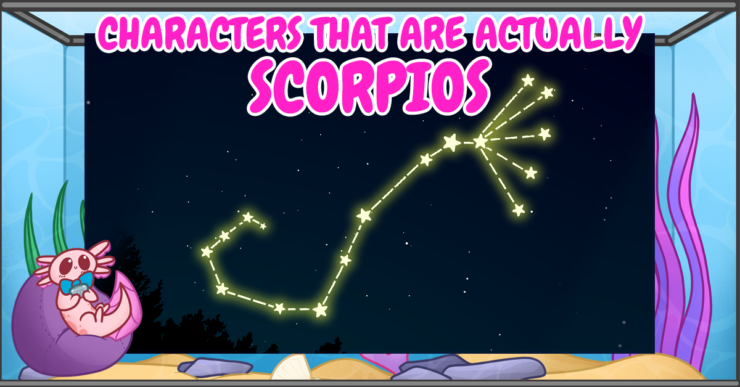 Characters That Are Actually Scorpios

Did you know that these visual novel characters are Scorpios?

I have to be honest, as much as I love to stay in the know about the zodiac signs, I’d never met a Scorpio that I was aware of, and I didn’t know a lot about them. Coincidentally, while writing this article, a few Scorpios have crossed my path, and after researching Scorpio characters in visual novels, I’ve concluded that Scorpios are the coolest zodiac signs. Here are a few characters that you didn’t know were actually Scorpios!

That’s right! Arima, playable character and love interest, is a Scorpio. If you aren’t familiar with the Scorpio’s key characteristics, keep in mind that these zodiac signs can appear strikingly different from their fellow Scorps. They’re loyal and fiery about their passions, which describes Amira in a nutshell. Scorpios are the best to pull off a leather jacket, and it looks like Amira is already wearing one, and it’s red—a reflection of her flaming personality.

Okazaki started out as a cynical, sarcastic protagonist who didn’t feel like life had any meaning. That all changed when he met Nagisa, and his Scorpio loyalty shined bright as he stood by her side like a knight in shining armor. Tomoya and Nagisa’s daughter, Ushio, would be in her high school years around now, just as her parents were during the visual novel (and show). One can only wonder if Ushio is attending the same school as her parents did. Tomoya is thirty-seven years old at the date of this article’s publishing.

Scorpion prominent in their charts tend to be magnetic, highly sensitive, intuitive, creative, and secretive at times.

Graves exhibits the dark and mysterious side of Scorpios. It’s true that Scorpios have the ability to be manipulative at times, and when one comes into a position of power, they can twist events to play out in their favor. This is certainly the case when Graves hires protagonist Avery without being honest about certain aspects of the cafe. Scorpios are dangerously smart, and that’s part of their allure.

Cove Holden from Our Life: Beginnings and Always

These individuals are known for being calm and cool, looking mysterious and hard to figure out.

Born November 2, 1997, our beloved Cove Holden is twenty-five years old in real time. Cove has to be one of my favorite characters of all time, and that’s because of how rewarding it is to grow up alongside him and peel back the different layers of his character. At first, Cove has a somewhat brooding presence, but we quickly find there’s a reason he didn’t want to move to Sunset Bird. Eventually, Cove shows us some of the Scorpio’s finest qualities, and that’s their devoted friendship.

Another key characteristic of Scorpio signs is their magnetism…

Robots have zodiac signs too, and K1-B0’s official birth date is October 29th, which makes him a Scorpio. K1-B0, better known as Keebo, is intense and confident to the point of being competitive. Keebo hates being called “normal,” and will stop at nothing to ensure he’s impressive to others. So many Scorpios exert an aura of confidence, making them so magnetic to the rest of us.

They have a powerful presence and demanding personalities…

I would have guessed that Lupin was a Leo, because when I think of the star of the show, I think of Leos. But that isn’t the case for Lupin, a true Scorpio at birth, and any seasoned zodiac fan might have guessed that right away. It’s true that Lupin demonstrates some of the best qualities of a Scorpio, like intense dedication, fervent loyalty, and a confident aura that communicates that he is the male lead. Sure, Lupin might display some moments of manipulation—he’s a thief, after all—but he’s always upbeat about anything and everything, giving him the Good Guy title no matter what.