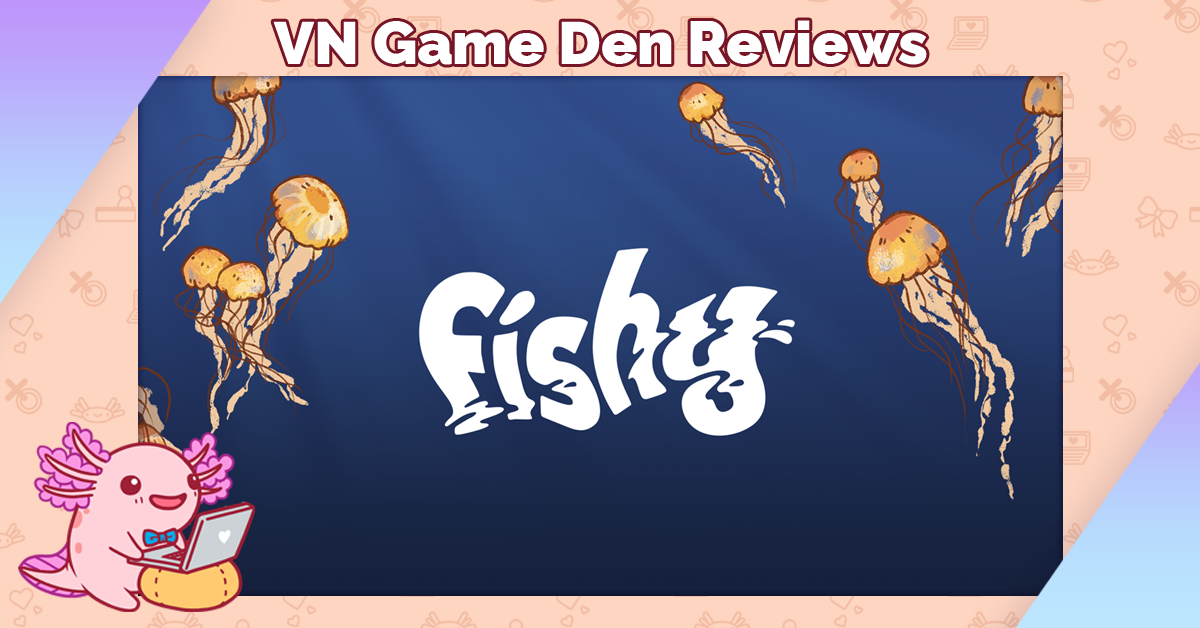 You don’t like aquariums. They freak you out. When it’s your friend’s birthday and everyone else is going to be there, though, you don’t really feel like you have much of a choice. As the sleepover progresses, things start to get a little…strange. Certainly it’s all in your head, though. Right?

Join us in a look back at one of the 2020 Spooktober Jam entries as this year’s jam proceeds.

From I Choose Paradise, fishy is a low-key, semi-surrealist horror game with a teenage cast. You don’t like aquariums. They freak you out. When it’s your friend’s birthday and everyone else is going to be there, though, you don’t really feel like you have much of a choice. As the sleepover progresses, things start to get a little…strange. Certainly it’s all in your head, though. Right?

With the feel of penstroke and paint on canvas, the art in this game is affluent with this wonderful hand-drawn feel. It takes hints from storybooks and young-adult graphic novels to create something that is aesthetically unique that both complements and contrasts with the overall tone in various turns. It’s full of beautiful marine life illustrations constantly rotating through the background of this aquarium where the story is set. Some of these backgrounds have gentle animations in them, and even the ones that don’t have a delightful sense of movement and depth.

On top of these backgrounds sits a wonderful diverse cast of characters, including the lead with a lovingly crafted prosthetic arm. They’re expressive and endearing and they actually look and act like the young teens they are. They’re odd and imperfect and act out in those weird moral gray areas that are created when you’re just now learning how to be an adult. There’s a raw realness to them that, as an adult player, invites an almost unfortunate nostalgia of what it’s like to be bullied or not fit in or otherwise struggle with how you’re meant to exist in this big, vast universe.

These feelings stick through the slow, creeping, eldritch-light horror as the game progresses. It never delves into anything particularly visually horrific, and it’s all the stronger for it. It’s never gory, instead riding that fine edge between normal and abnormal. Its horror lies in the surrealism of the “not quite right” and frequently chooses to pin its horror content to what can’t be seen or what’s not on screen. It recognizes the actual, literal day-to-day terror of abandonment. Of the dark depths of the ocean. Of the everyday unknown. From there, it expands that reality naturally. While occasionally the tension build-up leaves something to be desired, our main character’s constant self-defeating internal dialogue fills in the gap. There’s this constant underpinning of general childlike uncertainty and sadness that creates a strong pivot for the horror elements to lean into. It understands and fully embraces that one of the deepest, darkest places of fear is that retreat within our own heads when the world around us feels like it’s falling apart.

This is all tied together with a story that’s really, ultimately, about coming of age and finding yourself. The writing is earnest and down to Earth. The character voices are strong and even if not always totally authentic to the age group still very strongly capture the feeling of being a teenager. It’s a story about friendship and fitting in and being yourself. By seating us in the head of the main character, all the feelings therein become even more expansive. The heartbreak and horror all hit closer to home.

What I think I, as a consumer of horror, appreciate about it the most is the accessibility of its horror from both a content and intellectual perspective. There’s body horror, but it’s not really a gross body horror. There’s no violence or death. It leans on a very fundamental definition of horror that doesn’t use these elements and, by its particular design, doesn’t need to. It’s intelligently written and delves lightly into existential philosophy without being pretentious. While it concerns a cast of accurately portrayed teenagers, the content is far from childish, while still being attainable for most reading levels. So whether by happenstance or design, these developers have created something that has a remarkably wide appeal. It’s a solid horror game for horror fans while still having a lot to offer non-horror fans or act as a great entry point for newcomers to the genre.

fishy is a solid horror game that, though short, takes you on an excellent journey. A little existentialism, a little coming of age, and a little body horror comes together in a wonderful tale of, ultimately, learning to love yourself.

Get it for free on itch.io and Steam.