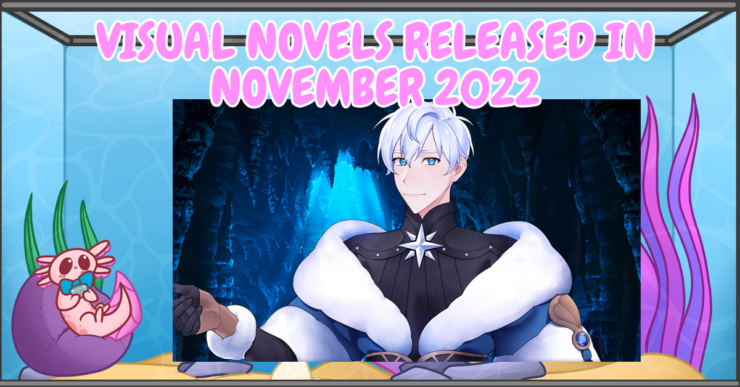 Check out these November releases!

November rewarded us with an array of fantastic visual novels to play. Here are a few games to add to your Christmas wishlist!

If you enjoyed Cinderella Phenomenon, you might want to add this new visual novel to your to-play list this winter. In The Winter Tower, Ekaterina is up against her evil step-mother and step-brother to secure her rights as successor of the House. The Winter Tower is a beautiful romance game, and what I love about it is that it features a sharp-tongued protagonist with a fiery side that keeps things interesting. The artwork is spectacular, so it came as a surprise that the game was released for free.

Aslan’s Story is a standalone expansion for Love Spell: Written in the Stars, focusing on a bartender named Aslan. The game starts off with the prologue where we are introduced to the new love interest, and the scene is quite hilarious. The route diverges from the others in regards to how Luna uses the mysterious book. Love Spell is a wonderful game about magic and romance told from the perspective of a spunky yet lovable protagonist.

Please Be Happy is a yuri slice-of-life story about a fox named Miho who finds comfort in her friendship with a human and a vampire. The visual composition of this game is very unique, as the dialogue appears as speech bubbles in various locations on the screen rather than fixed in place. It’s a technique that has been done before, but isn’t commonly used, and it helps the game feel more animated than static. To coincide with the wholesome theme of happiness in this game, the story branches off into four different endings, all of which are good endings.

Demonheart: The Ice Demon invites you to find romance either with a witch’s brother or her demon prisoner. Anyone who’s a fan of the Demonheart stories will enjoy this game’s worldliness as it takes readers to a fantasy Arabian-style village. The demon, Esmius, is by far the most intriguing love interest in the story in both design and the mystery revolving around his captivity, so it’s no surprise that this demon is the cover boy. Even so, the other love interest Sirath is also a servant to his witch sister, and despite his initial arrogant attitude, I have a feeling there’s more to his story that’s worth uncovering.

Can you imagine being the writer of a BL story, and suddenly you’re yanked into the world you wrote? That’s what novel writer Taeram faces as he’s transported into a romance simulation as the main star of the cast. The love interests are mesmerizing, and as an added treat, the game features Korean voice acting, which is beautifully done. The story for No Random Novels has been translated from Korean, and while the premise seems more than promising, it’s uncertain what quality the translations are.

Play as Michael, a 17-year old on a tropical vacation where he meets a mesmerizing girl named Rose, who has more to her than meets the eye. 7 Days of Rose has phenomenal artwork. Upon first glance, I was blown away by the backgrounds as well as Rose’s character design, so if you like those, then you won’t be disappointed by the CGs, which are just as stunning. Like the title suggests, the story takes place over the course of a seven-day vacation, but all three endings of the game can be completed within a few hours. Overall, this game is perfect for fans looking to live out a tropical summer romance.