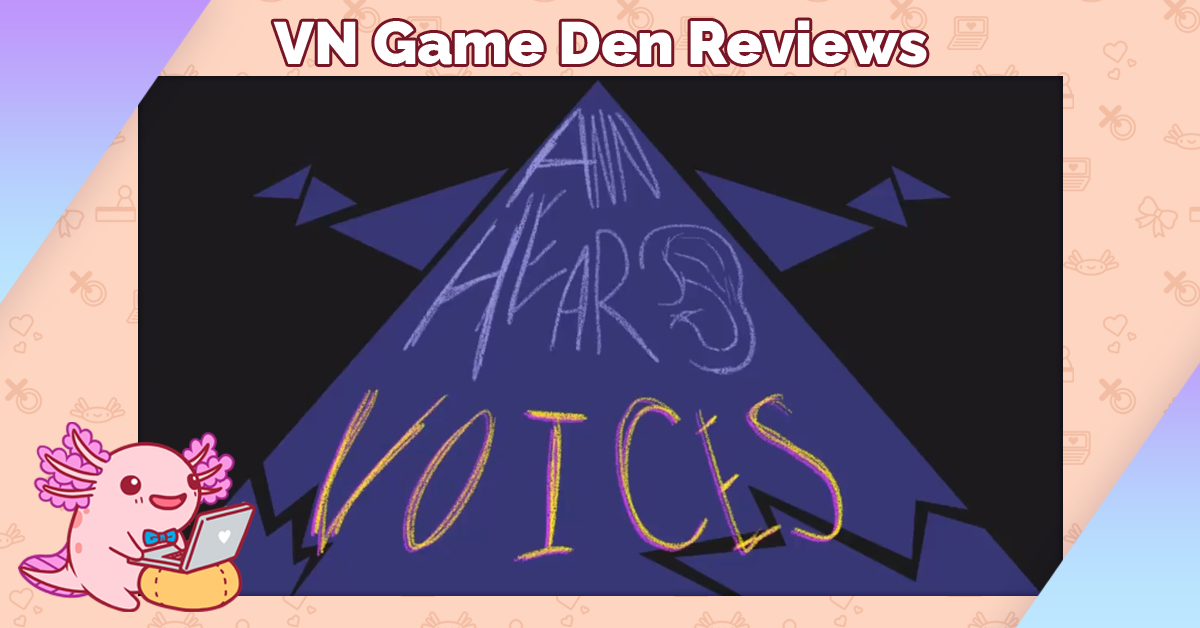 As the chaos and suffering of the pun-demic reign, Ann can’t help but drag more and more into this world of her unintentional making. All because voices in her head have begun to control her every action.

From a team led by WoLoLoiK, Ann Heard Voices takes us on one woman’s night during a human disaster of the strangest nature: a pun-demic. But as chaos and suffering reign, she can’t help but drag more and more into this world of her unintentional making. All because voices in her head have begun to control her every action.

This game is visually frenetic and wild, eschewing more “traditional” visuals for a more cinematic approach. In many ways, it feels like a one-person stage production, our singular actor trapped in a room they can’t escape from. Ann’s total lack of major distinguishing features, the absence of even a face, creates a feeling of disconnection from the real world, while acting as a solid place for the reader to slip into Ann’s perceptions and reality. The singular background, while simple, is rich with environmental storytelling, bringing the reader immediately into the nature of the world as it stands when the game begins without need for heavy exposition. The overall visual mood of the game does considerable heavy lifting, setting the stage for how the story plays out, and does so elegantly.

The story itself is simple; it has a small cast with complex inter-social relationships made more complicated by the fact that two of the members are simply voices in Ann’s head. With her being at the center of an apocalyptic scenario, its implied inception, one would think her an easily hateable figure in any other setting. Instead, she’s easy to empathize with. She’s been broken. She’s battered. She doesn’t have the will anymore to stop this disaster from unfolding, even if she could see the way to do so. The game as a whole unfolds her life in a very organic way, never feeling the need to pause and explain itself. By the end of its very short runtime, we still deeply understand the pain she’s going through. We also feel trapped by her own hopelessness. While the game presents us with choices and even a countdown to make those choices at times, the player actually has no control over the final outcome. The ending is inevitable. While in other games this illusion of choice might play out as a negative, in the context of this story it feels more fitting. Ann has been trying to change things. She’s been trying to keep the world from falling even more in on itself. And she just can’t. The voices are too strong. So through this purposeful presentation of a choice that’s not a choice, we too feel that desperation.

One of the most interesting parts of the story is the nature of the apocalypse. Or the…a-pun-calypse, as the case may be. The idea that puns could act as this madness-inducing linguistic infection to the point of total ruin is funny on the surface. But when combined with the tone of the game and faced with the implications of what this world is now starting to look like, the intrinsic comedy gets completely stripped out in a very fascinating way. Simple language turns that would have rightfully been groan-inducing but ultimately harmless are now threatening and horrific, creating a wonderfully strange dichotomy.

Of course, as the title would probably imply, the voice work and subsequent audioscaping of the voices are what sets this game apart from so much of the medium, fully taking advantage of the multimedia aspect of visual novels. There are extremely powerful performances from all the voice actors, but Grin and Chuckle, the titular voices in Ann’s head, are particularly well-implemented. If you put on headphones, as suggested, you’re treated to an excellent use of binaural audio. The voices drift from ear to ear or choose to anchor themselves in one side of your head. You can hear strange off-script underpinnings that get lost just below the main batch of text. Combined with the music and subtle sound effects, the whole audio landscape is eerie and creeping and the shining star of the whole game.

Ann Heard Voices is a strange and subtle horror, drawing its feelings of fear, despair and unease from an odd, yet familiar source. It sneaks down into your bones and doesn’t let go, leaving the feeling lingering long, long after you’ve managed to work through the short play time.

Get it for free on itch.io.