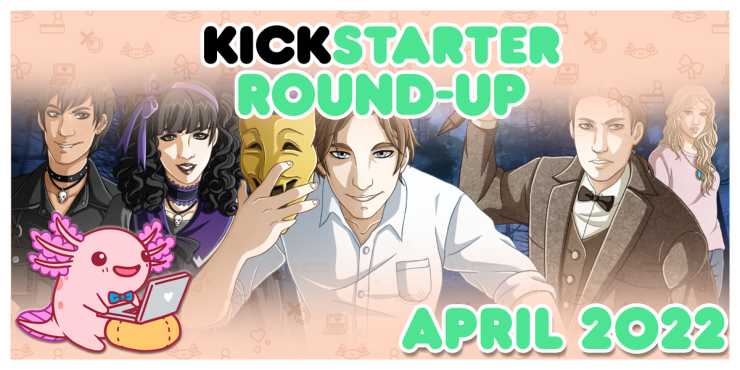 These are some of the VN Kickstarters that launched in April 2022.

It’s been a while since we did a Kickstarter round-up, but right now there are a ton of campaigns out! It’s high time we release an article that highlights some of the visual novel Kickstarters currently running.

Twice Reborn is a supernatural visual novel about a series of vampire murders that leave a community on edge. Mark Delaware, a newly turned vampire, must make the difficult decision as to which faction to side with.

There are three core paths Mark can take: to side with humanity, to side with vampires who reject authority, or to become the vampire enforcer. There is a fourth and short hidden path of the vampire hunter as well…

The path I find the most intriguing is that you can choose to become a vampire hunter. I’m curious to see the outcome of a freshly turned vampire hunting other vampires because the irony in that sounds like fun. I love when the protagonist is faced with major choices in games; I just hope that with each route he has a motive to support his choice to join that faction.

I’m always excited to see visual novels with vampires and paranormal creatures. The genre is popular for a reason, and as someone who avidly read a good amount of young-adult vampire novels with mostly female protagonists, I’m interested to see how this type of story plays out from a male perspective.

Ubel is a thriller visual novel featuring eight individuals who are kidnapped and forced into playing twisted games of death in a facility ruled by malicious AI technology.

They are forced to vote for a victim every two hours until they manage to find and destroy the AI ruling over the facility. Will they succeed before death becomes imminent?

The setup seems very similar to Danganronpa, but that’s not to say that this game won’t be unique. What I’m most excited about is the free-roam aspect of the game where players can explore the rooms. There are also puzzles and mini-games that the player solves in order to try to escape.

As I write this article, Ubel‘s campaign has raised over €8,000, which is way beyond its initial funding goal. I’m not surprised that they were able to reach that milestone so swiftly. Even though their goal has been achieved, you can still support the project and reap the backer rewards!

Guild Hall Masquerade is a dating sim with mythical characters you can romance. You play as a newfound member of an adventurer’s guild with the objective to sharpen your skills and build relationships with your fellow guild members.

“Fantasy” and “dating sim” are my favorite words to hear, so I’m always eager to find out about the latest title emerging. For Guild Hall Masquerade, I look forward to the array of mythical characters and world-building that this game has in store.

You will meet your fellow guild members, make friends, uncover mysteries, thwart villains, and maybe even find a date to the Guild Hall Masquerade!

What’s impressive about this game is that it has a whopping twelve love interests you can romance! The game also allows players to set their preferred pronouns. This LGBTQIA romance game should be great for players looking for a Dungeons and Dragons-like experience in a dating sim.

NIXIE is a Black culture-themed visual novel about a soup kitchen worker named Fiona Soul and the events that follow after she meets a spirit. This game will feature a boss battle and a unique comic-book art style with a retro zing.

This Kickstarter campaign is solely for funding the demo (chapter one) of the game. The developer calls NIXIE a hybrid visual novel game, and since it’s still in early development it’s unclear what that will look like exactly. From what the game has to show so far, it seems to include a pixelated battle system that’s reminiscent of an old-school arcade game.

It’s a passion project made with love for black adolescents who want to escape in to a fantastical world of spirits, the power fantasy of playing an Orisha and having a story that isn’t framed around black trauma.

I love that this game features a cast of Black characters and serves as a positive inspiration for younger generations. I always advocate for indie visual novels, and one of the biggest reasons for that is because independent creators have been expanding the visual novel community to be more inclusive of so many different communities.