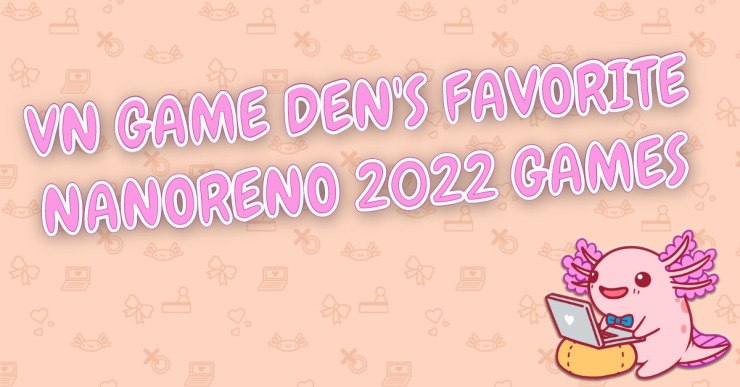 The VN Game Den team played through some NaNoRenO 2022 visual novel entries, and we’re here to tell you our favorites!

To celebrate this year’s NaNoRenO 2022 game jam, the VN Game Den team has come together to share our favorite entries. Check out these fantastic visual novels and you may just find a new one to play!

Someone Stole MY LUNCH! by Studio Clump

Imagine cooking a perfectly seasoned lunch for work. You spend hours preparing it the night before and stick it into the refrigerator in your workplace’s break room. The only thing getting you through the mundane work day is the idea of chowing down on your lunch, but when you open the fridge…you find an empty container!

Someone Stole MY LUNCH! is a quirky and lighthearted visual novel. I absolutely adore how well it captures the feeling of helplessness and rage once you find your lunch completely eaten. It certainly feels relatable and real. What I love most about this game is the humor in the script. It’s a little harder to get a desirable ending, but the very bad ones are pretty funny and I enjoy playing through most of them.

Tales of Grumville is a pleasant surprise amongst the plethora of NaNoRenO entries. I was immediately drawn in by the art style. There’s a charming and vibrant feel to the game that just makes you feel good. There is partial voice acting that actually did make me squeal a little when I first heard it. It’s a really nice addition to an already polished game. Honestly, I was really impressed by this entry and what the team was able to accomplish in just a month!

I’m always a little wary about browser-based games because of save issues, but Boyfiends is short enough that it doesn’t really make too huge of a difference. It makes playing through the game more than once a little tedious, but the experience is certainly still worth it.

The plot of Boyfiends was concocted by a random prompt generator, which I think is a fun and novel concept. It cuts to the heart of why I began working on game jams: the fun of the challenge and creating a game from beginning to end. Boyfiends was made in only twenty-four hours, and honestly, it’s pretty polished overall for that time frame. I’m impressed by that feat alone. If you like wholesome boys’ love stories about heroes and villains, check this one out.

Mysterious Thief Emerald is a phantom thief-meets-magical girl otome game. The protagonist is a witch who uses her magic to steal precious jewels from museums. Because she can use her magic to turn invisible, fly, and do anything else needed to steal the objects of her desire, her heists are a piece of cake. The only thing that might get in the way of her perfect mission is a certain detective who’s determined to track her down.

I love her spunky and bright personality, especially in contrast to the detective who serves as the love interest. What better setup for a romance can there be other than a thief and the sleuth investigating them? There’s a lot more to their relationship that makes this otome game a fun one, but I’ll leave the rest to your imagination. Anyone looking to play a cute otome romance about a magical emerald heist, this is for you.

Ballads at Midnight by Synstoria

I’ve been keeping my eye on Ballads at Midnight since I saw the initial Twitter posts during the game’s development. It’s a historical romance about a sharp-tongued prisoner who bargains with a handsome vampire for her life. The events that play out in Ballads at Midnight make it a unique spin on a classic vampire romance.

My favorite element of this game is the writing; it feels like I’m reading a traditional novel, and those are my favorite kinds of visual novels. The writing is so descriptive about the atmosphere and the dialogue is so incredibly natural that I feel like I’m truly a part of the story.

Gidget & The Mysterious Thievery of Hoppity Town by Fable Novel

I’m usually on the hunt for otome games, but when I saw Gidget & The Mysterious Thievery of Hoppity Town, I knew I was sold. As the title suggests, the story is about a local thieving incident, and it’s up to private detective Gidget to solve the mystery of the crime.

This game is adorable in every possible way and the comedic timing is on point. This is the cutest game I have ever seen; I love the art, the characters, and the story. The game features a lot of fun point-and-click mini games. For anyone interested in a crime mystery that’s cute and wholesome, this is the perfect game to play.

One Romantic Date, Hold the Awkward! by team lead by DerpyChoCho

So I love cute and fluffy visual novels, and One Romantic Date, Hold the Awkward! is such a perfect visual novel for my preferences! One thing to note is this visual novel’s characters are based on Undertale characters, so you may recognize the names and character designs.

In One Romantic Date, Hold the Awkward!, the plot is to ask and go on a date with The Great Papyrus. The MC is a bit nervous about the date, and gets help from the trio Alphys, Sans, and Undyne. Overall, there are four unique endings, beautifully vibrant art design, well-written character dialogue interaction, and great voice acting. This NaNoRenO 2022 entry is one of my favorites as a light and fluffy romance that’s just a feel-good visual novel!

Fear Me by Studio Lemi

As VN Game Den’s resident horror fan, it’s always a treat to see a new horror visual novel come out. In this spooky game, an asteroid has hit the Earth and emitted smoke that caused panic, spurred new diseases to be formed, and ultimately resulted in the world collapsing. You play as a masked individual who is driving down the road, trying to focus on the good that happened in their life before the game’s events occurred. The sound effects, music, and the struggle the main character goes through in this short game are intriguing and gripping. I won’t spoil exactly what it is, so you’ll have to play the game yourself!

The game is being updated at the time of writing this with new content and endings being added. So, even if you’ve played this before, I would suggest taking another dive into Fear Me!

Alight on the Shore by Andy & Diane

While I enjoyed all of the games in this list, Alight on the Shore really stood out to me for several reasons. I felt that even though the demo was short (five to ten minutes of playtime), it really packed a punch and set up a truly fascinating world that left me wanting more. I was also really impressed by the art direction that they chose and the general scene composition throughout the game. I’ll definitely be keeping an eye on this series to see how it progresses.

Gidget & The Mysterious Thievery of Hoppity Town by Fable Novel

I’ve been looking forward to Gidget since I first saw it on Twitter and it sure delivered! I really enjoyed reading the story of Gidget, Croak, and Crest’s adventure. The game has a really wonderful (and fitting) art style and the detective game mechanics were quite enjoyable as well. It seems like there might be plans for a sequel—I’m really hoping there is!

I really enjoyed the Clockwork Waltz demo—the art is absolutely spectacular, the world is interesting, and I found myself wanting more at the end of the demo. I’m looking forward to seeing more as the game is developed.

Tales of Grumville caught my eye due to its unique and cohesive visual aesthetic. I wasn’t expecting the story to be as touching as it was, but I thoroughly enjoyed it. The voice actors also did a fantastic job!

Jester Under Pressure has a colorful aesthetic, but don’t be fooled: this game has a serious story with some high stakes. Diskarte is a royal jester whose job is to entertain Queen Bahaghari, but unfortunately for Diskarte, the queen is not easily entertained, and she will use her powerful magic to kill them if they do not sufficiently please her.

Both love interests, knight Sana and commander-turned-cook Yugto, are likable and have enjoyable routes. This visual novel also draws heavily on Filipino culture and includes a glossary of Filipino terms used, which is an excellent touch.

Under the Witch’s Trial by Inazuma Order, ShibaList, and teasugarr

In this visual novel, the protagonist is transmigrated to the body of an early boss in a grimdark JRPG he recently played (and hated)—while it would be easy for a story like this to fall into the trap of being hopelessly cynical, Under the Witch’s Trial‘s main route instead ends up being heartwarming, with the new MC opening up to his party and his presence changing the game’s world for the better. (As for the other route…well, that’s something you can discover on your own.)

Alongside the story, this game features a sleek art style that’s nice to look at. Even if you’re not normally a fan of isekai stories, I think this is one that’s worth a try.

If you read only one visual novel from this year’s NaNoRenO, I recommend this one wholeheartedly. This kinetic novel has a bright, cartoony art style and matching aesthetic that makes it stand out, but more importantly, it’s a fun, funny, and well-written story that anyone of any age can appreciate.

While the story as a whole is bright and lighthearted, it does also touch on dealing with the death of a loved one and subsequent grief, and manages to do so without either making the entire story a downer or coming off as dismissive—which is truly an achievement.