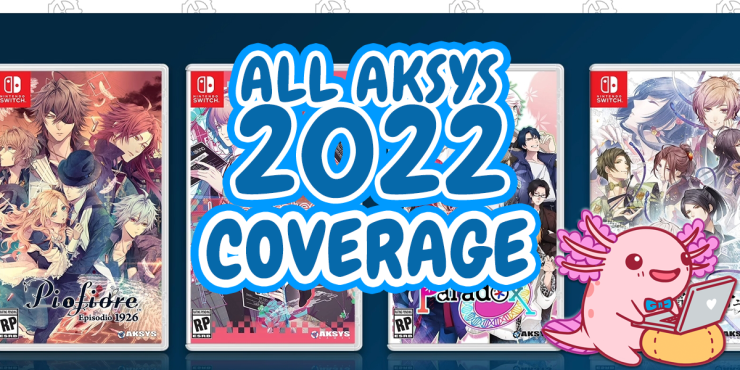 On February 17th, 2022 Aksys announced the release dates for upcoming games, including plenty of otomes!

On February 17, 2022, Aksys Games hosted an “All Aksys” event on their Twitch channel, announcing the release dates for four otome titles, plus an exciting new announcement regarding Variable Barricade’s launch. Yesterday’s event concluded with the unveiling of a few non-otome titles to be released in English on Nintendo Switch.

Variable Barricade is releasing next week, on February 24th, 2022. The protagonist, Hibari, is an heiress to a hefty fortune, and her eccentric grandfather is determined to get her hitched. He houses her in a villa with four eligible bachelors, all of them going to great lengths to win her affections, but Hibari has no intention of marrying and will do anything to scare these suitors away.

This romance game is releasing next week in the west on February 24th for Nintendo Switch. The publisher revealed that they have invited four prominent members of the otome game community to join in on the launch stream for Variable Barricade. Anne Lee, Blerdy, Marcus, and Chlo will be attending the stream to share their thoughts on the game as well its unique aspects. The event will take place on Thursday, February 24th, at 3 PM PST on the Aksys Games Twitch channel. You won’t want to miss it!

In addition to Variable Barricade, four more otome titles received release date announcements for the first time. Piofiore: Episodio 1926, Lover Pretend, Paradigm Paradox, and Kimi wa Yukima ni Koinegau are all being released in English on the Nintendo Switch. Exact release dates were not revealed, but fans can expect more announcements coming soon. See below for more details on these titles.

Piofiore: Episodio 1926 is the sequel to Piofiore: Fated Memories and will be a continuation of each characters’ stories, including five new episodes and one alternative “what if” scenario that “sheds light on a familiar face.” Aksys announced that the standard edition and the limited edition will be released in English on Nintendo Switch this fall 2022.

The limited edition of Piofiore: Episodio 1926 includes a full-color art book, a three-inch keychain of all the love interests, a collectable one-inch Lili enamel pin, and a 16″x22″ full-color cloth poster. All of these collectables will be put together in an exclusive box set. Pre-orders are set to begin on February 18th at 9 AM PST.

Chiyuki lives alone, spending all her time studying for university and doing part-time work. She has two dreams in life: to become a scriptwriter—also a dream of her late mother—and to find her father whom she never met. From clues left behind, it seems her mother was writing a drama script before she was born. Chiyuki lands a job as an assistant to a scriptwriter for a film that the sons of the drama staff are making. She searches for information while working her new job, but in a twist of events ends up cast in the role of their love interest…? This is a pretend love role, not true love.

Can Chiyuki create a script about fake lovers, while not knowing anything about falling in love herself?

Lover Pretend is set to release in English for Nintendo Switch in fall 2022.

The year is 25XX, a world where mankind lives only in isolated colonies. The protagonist, a student at the academy, is bored with the drudgery of everyday life, a day-to-day existence untouched by gossip about “Heroes” and “Vermin,” the enemy of mankind, and unnoticed by the good-looking guys at the academy. One night she slips out of the dormitory and encounters colony-invading Vermin, landing herself in danger! Four girls appear suddenly and repel the Vermin with miraculous abilities. The protagonist decides to work as a Hero, leading a busy life as both a student and champion of justice.
But why is it that she has more opportunities to talk to the good-looking guys everyone is whispering about…? What is their (the girls’ / guys’) secret…? And what is the enemy’s true identity…?

You can expect to play this game on the Nintendo Switch in fall 2022.

The first year of the Kyoho era. The land is ruled by the eighth shogun Tokugawa Yoshimune. Repeated incidents caused by monsters in the town of Edo upset and frighten the people so the Tokugawa shogunate establishes the “Oniwaban” to maintain public order and secured the town. Seasons passed—to year 11 of the Kyoho era. A girl in a village far from Edo has the power to see a “black thread” before every catastrophe and the panicked villagers drove her away into the snowy mountains. One day, a young man going by the name of Oniwaban appears before her. This is a story in which a girl encounters “non-humans,” and learns about love.

Kimi wa Yukima ni Koinegau (English title pending) was the last otome title that Aksys revealed details on, and is slated for a 2023 Nintendo Switch release. The opening video is reminiscent of the Hakuoki series, making fans hopeful that this is going to be a worthwhile game.

Blazing Strike is a retro-style 2D fighting game inspired by arcade classics developed by Capcom and SNK. The pixel art style fused with modern fighting mechanics makes this game a unique and exciting addition to the arcade fighter genre. The game is expected to release this fall 2022.

Aksys announced a limited-edition version of Blazing Strike that will include a full-color art book with a two-CD soundtrack and a set of collectible character cards. Pre-orders will begin on February 18th at 9 AM PST.

Monster wo Taoshite Tsuyoi Ken ya Yoroi wo Te ni Shinasai. Shindemo Akiramezu ni Tsuyoku Narinasai. Yuusha Tai ga Maou wo Taosu Sono Hi wo Shinjiteimasu (Mon-Yu for short) is a first-person dungeon-crawler with turn-based fighting mechanics. The official English title hasn’t been confirmed, and Aksys referred to the game as Mon-Yu. The game is expected to be released in English in early 2023.