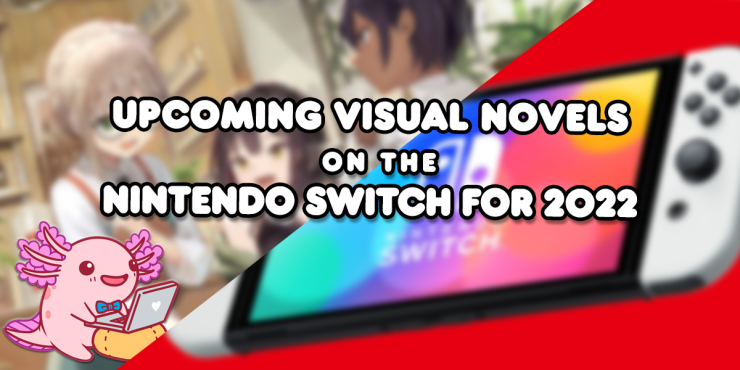 Upcoming Visual Novels on the Nintendo Switch for 2022

These are a few visual novels coming to the Nintendo Switch this year!

While there have already been a lot of visual novel titles released so far in 2022, there are so many more that are set to release before the year ends. These are a few you can expect to come out on the Switch soon, including an English localization and a fresh currently Japan-only release.

A story of love and friendship, and about understanding not just how to be happy, but how to be human.

Please Be Happy is a fantasy love story with adorable characters and female-to-female romance. There are two route options as well as full voice acting. This is the first visual novel I’ve seen whose story takes place in New Zealand. I think Studio Élan really delivers when it comes to illustrating real life places we don’t often get to experience in visual novels, such as the desert setting of New Mexico in Highway Blossoms.

There are a handful of unique features about this game, and the most remarkable one is that the main character is a fox! There is also a vampire love interest named Juliet, adding to a really unique cast of characters.

This game looks so professional and crisp just from looking at the promotional screenshots; these developers never seem to disappoint. Please Be Happy is still in development and there is yet to be a specified month of release. Meanwhile, you can check out the PC demo on Steam and itch.io.

The player follows Pollon Takaoka, a lively young man who dreams of becoming a hero admired by all. Pollon and his best friend, Cross Yumikawa, make their living taking on various hacking-related jobs; their group name, the “Nakano Symphonies.” During the events of the story, Pollon gains access to an ability allowing him to “save” at the current point in reality, and load his saves at will, restoring time to a previous save; this ability is very similar to the saving and loading functions found in various video games.

ANONYMOUS;CODE is developed by the creators of STEINS;GATE and will have connections to the universe established in their past games. High-tech games are always appealing and this visual novel is tech-driven in both story and mechanics. I think the E-mote technology they’re implementing is going to bring the sprites to life.

The complex reality and “save” system that Pollon uses to navigate time is a compelling concept. ANONYMOUS;CODE should be perfect for fans of sci-fi and technology. The game is slated for a Switch release in Japan only as of now, but I’m hoping a localized version is on the horizon.

In a stroke of luck, Chiyuki lands a job as an assistant for an upcoming film working with the sons of the former staff from her mother’s soap opera. But things take an even more surprising turn when she’s cast as the film’s female love interest!

Will she be able to find her father and pretend to be in love, despite not knowing anything about love herself?

Lover Pretend is an upcoming otome visual novel whose English localization is coming to the Nintendo Switch. The story is a slice-of-life romance that follows the main character and her experience in showbiz. Otome games transform regular life situations and turn them into something exciting, because naturally the MC’s life is anything but ordinary when she’s a PA who’s suddenly cast as the leading lady!

This is the otome game I’m most excited for since the release of Variable Barricade. I can really relate to the film set aspect of the story. Plus, all of the love interests are intriguing to me, and that’s not always the case when I stumble across a new otome game.