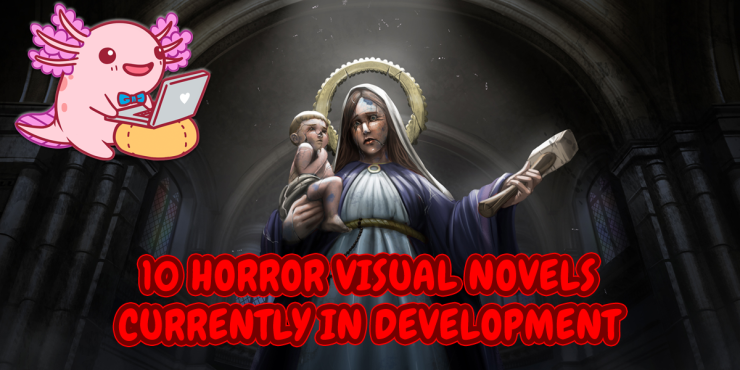 These are our top ten horror visual novels currently in development!

Whether a visual novel is psychological horror, paranormal horror, eldritch horror, or any other type of horror, the genre is exciting for thrill-seekers. That’s why we’ve compiled a list of in-development visual novels with darker elements—and the good news is, a lot of these plan on releasing in 2022.

It’s a time-bending turnabout in this Ace Attorney meets Friday the 13th adventure!

Join final girl Vivian Finala as she attempts to rewrite history and save her friends with the help of an unlikely ally, the homicidal (and thicc) demon Jack Headed Jill!

But is Jill really the soulless killer she makes out to be? As the body count continues to rise, so do the complications and conspiracies. Who is really behind the murders on Lake Shish Kabob? What does Vivian’s best friend Joy have to do with it all? And who is that cute cheerleader that keeps following Vivian around everywhere?

Jill O’ Lantern is a lesbian horror visual novel with point-and-click elements. The “First Slice” is the first chapter of the bigger game. It has received a polished update since its original demo release in October 2021.

9. The Elevator Game with Catgirls

The Elevator Game is a ritual that is said to give the player access to another world by following a strict set of rules.

Motivated by a bet made with her classmate, Asahi’s girlfriend Kirin decides to give the game a try, and drags her along for company. As Asahi waits outside of the building that Kirin chose to perform the ritual in, she starts to experience some confusing and unexplainable things…

Kirin fails to return that day, or the day after. Feeling somehow guilty as though Kirin’s disappearance might be her fault, Asahi determines to try and find her missing girlfriend… by playing the elevator game herself.

Where will your choices take her?

“Triqueta” is a horror themed visual novel, centered upon exploration of a mysterious realm of immortal creatures called the Fey. The player advances through the game by exploring the realm, solving puzzles, and speaking to characters in order to solve the mystery.

Triqueta was successfully funded on Kickstarter in December 2021. The gameplay will include stat-raising elements, and the protagonist’s personality will be shaped by the player. Triqueta is a visual novel that is diverse in its cast, presenting an array of body types, skin colors, genders, and disabilities and illnesses.

7. Yonder World: Interview with the Void

Yonder World follows the story of Vellus, a young angel who has recently received her dream job in Heavens. After a series of disappointing and unfortunate events, she finds herself in a strange world, perpetually drenched in midnight moonlight, whose inhabitants consist of a singular mysterious and infinitely powerful entity, and her few “visitors”.

Help Vellus navigate a world full of lurking dangers and filled with melancholy, in her quest to find her way home. Perhaps along the way, she will learn to undo the knots in her heart and even others’. Or perhaps you will play a hand in plucking her fledgling wings and breaking her halo.

Yonder World is an LGBT+ visual novel and will contain three love interests, two female and one male (for now). This game is currently on Kickstarter with a campaign live until March 4th, 2022. You can read our review of the demo here.

Reese is a drifter in the small town of Dundolk. He spends his time crafting the underground virtual puppet show SKELEVENTURE, and it seems nothing can steal him away from his work—until the coffee shop boy, Jalen, flirts with him. Take control of Reese’s work and try to win Jalen’s heart—without, hopefully, making a fool of yourself in the process.

This is a gay horror game based on the novel Ghost Economy and reflects four chapters of the original book. Players are raving about the unique elements this visual novel brings to the table. The developer considers this novel a prototype and encourages players to donate if they enjoy the work. It is unclear if the developer will expand upon this game.

After a night of drinking Eleadora takes a shortcut home through the woods. She’s angry, frustrated, and sad. At the crossroads she trips and cuts her hand on some broken glass. While looking over her wounds she mutters a wish out loud that calls upon an ancient and forgotten force that changes her life forever. She wakes up in an unknown room, in an unknown house, on an unknown plane of existence. Surrounded by horrors and death she must attempt to find an ally among the other occupants of the house. It’s clear they don’t have her best interests in mind, and trusting them could be deadly.

Survive and try to maintain your humanity.

Escape, if you still want to.

Escape, if they’ll let you.

In Blood is an otome game featuring a female protagonist and an in-depth personality system where the player can shape the MC’s personality traits. There are three male love interests and one female love interest. The demo for this dark Lovecraftian horror game is available on Steam and itch.io, and you can check out our review for the In Blood demo here.

Dive into the 1950s and explore an eldritch-horror-infested world soaked in dark magic, mystery, and romance. Call Me Under takes place in the mysterious underwater city of Styx, a haven inhabited by humans, sirens, and a host of unknown otherworldly entities.

Play as a choice of two different faceless protagonists from The Surface seeking to leave their past behind and start fresh in a new city, even if it is one only rumored to exist at the bottom of the ocean. They do say there’s nothing like a clean slate…

But maybe not if you find yourself thrown into the middle of a brewing fight between the Shadows and the Light; two ancient, otherworldly entities embroiled in a centuries-long battle for power.

This LGBTQA+ eldritch horror visual novel was successfully funded on Kickstarter and offers players the option to play as a choice between two faceless protagonists. Call Me Under has six individual romance routes and two polyamorous romances. According to the game’s devlog, they are aiming to get this visual novel on more platforms. This game was included in “VN Game Den’s Most Anticipated VNs of 2022“!

3. Chronicles of Tal’Dun: The Remainder

This is a story of two magi, Vyn and Ilar, who find themselves trapped in a collapsing tower with their only hope for salvation being a difficult ritual. Or at least that is what Ilar tells you. The thing is – you don’t remember anything, and Ilar’s story makes less and less sense the closer you are to the ritual. Are they hiding things to protect you from the bitter truth, or are they deceiving you for some more nefarious reason?

Guide Vyn’s actions to death and beyond and uncover Ilar’s truth. Are they your colleague, lover or something completely different?

This Interactive fiction/visual novel hybrid is made by two people – Ze and Nim and it is our very first game! It features hand drawn illustrations, animated scenes and an original soundtrack, all working together to immerse you into the world of Tal’Dun.

This game contains three acts, with acts one and two currently available on itch.io and Steam. The final act is expected to release in April 2022. This visual novel is recommended for mature audiences due to its dark themes. Learn about the development of The Remainder in our interview with the game’s developers, Ze and Nim.

Saint Maker is a short horror visual novel starring Holly Beltran, a girl who is sent to a religious recollection. Though Holly would rather spend her summer lost in the pages of her fantasy books, Adira, the head nun of the convent, has other plans… At night, broken-faced statues and whispered prayers haunt Holly’s dreams — before the recollection is over, Holly may have to face more than her own demons to come out alive.

From the developers that brought you The Letter, a new visual novel is coming to Steam. Saint Maker is a religious/psychological horror that will be fully voiced and contain animated visuals. If the production value is up to par with The Letter, this visual novel will be impressive. This is another title which appeared on our most anticipated VNs of 2022 list.

//TOKYO, IN THE NEAR FUTURE: Whispers and rumors are spreading through the city like wildfire. Murmurings of a bizarre website have started to pique the interest of more than a few people—people willing to take extreme risks in order to fulfill their darkest desires.

Corpse Girl’s Website supposedly allows users to request the death of someone they know. All that is required is a photo of the proposed victim. Once an image is uploaded, the website promises to snuff out the victim’s soul within a matter of days.

Victims of the website apparently receive a photograph of their own corpse before they are killed. Photos are time stamped with a date… Perhaps a predicted time of death? The website’s authenticity is questionable at best. It has become an interesting topic of conversation and nothing more.

And yet… When people start dying in odd ways across the city, the website instantly returns to the limelight. All of the recent victims were found in possession of strange photos—photos of their own corpses, received only hours before they died…

CORPSE FACTORY is a psychological thriller with paranormal elements, reminiscent of a fusion of the Death Note and Hell Girl series. It was successfully funded on Kickstarter and is expected to release soon for the PC and Nintendo Switch. You can read our CORPSE FACTORY demo review here.