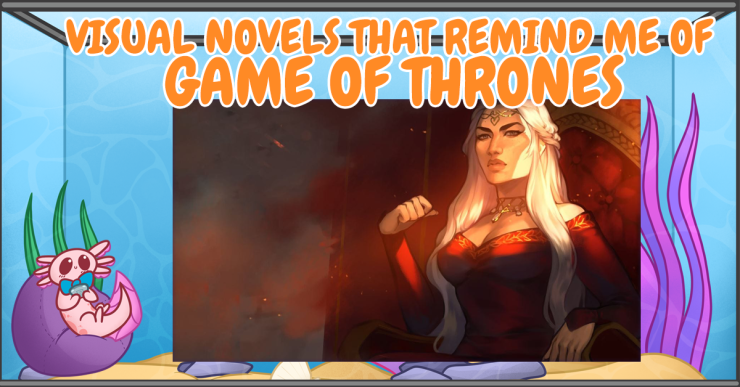 Visual Novels That Remind Me of “Game of Thrones”

Here are three visual novels that remind us of “Game of Thrones”!

A Song of Ice and Fire is a medieval fantasy that depicts a story filled with dragons, political strife among kingdoms, and a deadly winter storm that threatens to end it all. The George R. R. Martin books inspired the popular TV series Game of Thrones back in 2011, and they’re likely to inspire more works in the future. I’ve always been drawn to fantasy worlds, so I often seek out visual novels that have elements similar to Game of Thrones. Here are a few that have certain characteristics that resemble the popular story—some of which might surprise you.

Can you survive long enough to reach your coronation?

I’ve had Love Live the Queen in my library for some time now, and I was expecting the game to be cute, since the cover art depicts a charming pink-haired princess in a frilly tutu. A few weeks ago, I finally decided to bump this to the top of my backlog and give it a try. I was surprised to find that not only is the game cute, but it’s also actually filled with intense political tension, tragic yet adorably drawn death endings, and a slew of events that make the game’s story compelling.

There’s a lot under the surface of the cute cover art featured in Long Live the Queen. I was surprised at how challenging the game was—in a good way. This is a stat-raising visual novel where the goal is to educate the young queen-in-training by the time of her coronation. Many obstacles lie in her path, and she may even be poisoned by an enemy if her skills aren’t sharpened.

Long Live the Queen surprised me with its Game of Thrones kill-or-be-killed style of gameplay. This visual novel was originally released in 2013, and has just become available on consoles in July 2022!

Imperial Grace is a visual novel / otome game, focusing on politics and romance in an imaginary medieval world. As the new Empress of Calidya your choices will determine your future and your kingdom’s, so rule wisely.

It wouldn’t be possible to have a Game of Thrones-themed article without mentioning Imperial Grace. The game represents women in power, as illustrated by the main female protagonist and Crown Empress, Lydia of Terinfel. Lydia’s sense of purpose is similar to the strength you find in Daenerys Targaryen after her character transformation. These are characters you can root for because they have a sense of conviction and heroism that makes us want them to win.

Imperial Grace is currently in development—it’s an ambitious project with a lot revealed in the demo. There’s optional resource management and a generous amount of choices that allow players to be immersed in the fantasy world of Calidya. My favorite aspect of this game is the artwork; it’s stunning and beautifully lit. If Game of Thrones were a visual novel, it would probably have art that resembles the art you find in Imperial Grace.

Ardency: Heart of the Rebellion

You are an integral part of the royal rangers, serving the king of Allton. Due to recent brewing issues with the neighboring elven kingdom, Kedarn, you have been busier than ever out in the field. For the first time ever, your company takes an elven prisoner. This mysterious fellow is different than other elves you’ve encountered. Decide whether this meeting will take you down the road of romance, friendship, and even betrayal with your fellow rangers.

Ardency: Heart of the Rebellion is a title I found while perusing itch.io for medieval fantasy games. The game immediately launches you, the nameable MC, into action as you’re traversing through the forest and suddenly surrounded by a band of elves. Players are given a good amount of choices to navigate the dangerous situation, and I found the various dialogue options to be entertaining and immersive.

Ardency is an otome game that offers players four different love interests. What I liked about this game is that it’s action-packed and filled with more than just romance. There’s an entire backstory with strongly written characters that reel you into the story. The game takes place in a high-fantasy setting with rival elven kingdoms and alliances that may end in betrayal, depending on your choices. The fantasy world and the potential for your allies to become your foes reminds me of the merciless world of Game of Thrones, and it’s exciting.