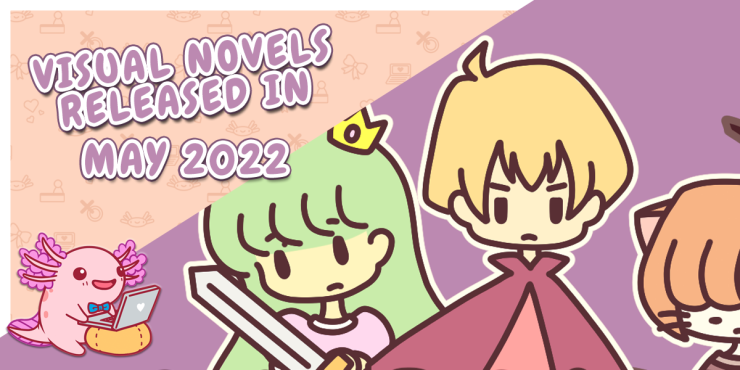 Visual Novels Released in May 2022

These are ten visual novels that released last month!

On the first Friday of every month, we release an article spotlighting a selection of visual novels that released the month prior. In May 2022, we’ve found a array of games released in varying genres. Some of these new releases are from the creators of previous popular titles, such as the fault series, Changeling, and Arcade Spirits.

A HERO AND A GARDEN

Once upon a time, there was a princess in a tower.
A brave hero went to save her… but it didn’t work out.
He’s pretty good at gardening though!

There has been a substantial increase in the number of visual novels developed that have gardening as an underlying theme. Farming, gardening, and anything under the umbrella of cultivating and crafting has become increasingly popular, and I’m finding more and more visual novels emerging with this theme. Brought to you by the creator of Mima and Nina’s Chocolate Workshop, this updated remake of A HERO AND A GARDEN features magic, monsters, and adorable art.

LIGHTKRAVTE presents its story through the eyes of Khaji Oberg, an ordinary and unremarkable teenaged boy who finds himself reaching for a dream that slips ever further away…

LIGHTKRAVTE is a new addition to the fault series, but you don’t need to have played any of the other games to follow along (though I highly recommend doing so). The fault series is nothing short of a masterpiece, and what I admire most about these games are the cutscenes and innovative animations they bring to visual novels, which only seem to advance with each of their releases; LIGHTKRAVTE seems to epitomize that, with lively character movements and 50 CG scenes.

A broken wind-up ballerina in a music box tries to regain her memory with the help of a small child.

The Still Dancer is a short visual novel that was made for the OST Jam. In this jam, the host provided the music and the developers created games based on the songs supplied. This creator was clever in creating a visual novel about memories. The art and story of this music box-like visual novel reminds me of a children’s book, and the design of the music box is similar to one I had when I was a child, so this game evokes a strong sense of nostalgia. An innocent and touching story, The Still Dancer is a must-play.

A cat and an otter travel to remote places in search of treasure. After discovering a legendary diamond, they become trapped in a labyrinth-like cavern. Will they find light at the end of the tunnel?

Lucent Depths is a boys’ love furry visual novel about the relationship between a cat and an otter. The premise is intriguing, laying the foundation for the central romance to deepen, because when two characters are stuck in a sticky situation together, it creates a stronger bond between them. If you’re looking for a new furry visual novel, this one is SFW and promises adventure and romance.

Once By Moonlight is story about your body changing before you’re ready. But is anyone ever ready? Charlie is trying to cope with the big changes in their life, internally and externally. Will they be able to move forward or will they cling to the past clawing and howling?

The synopsis of Once By Moonlight reminds me of the new Disney movie Turning Red. Both are metaphorical, as they illustrate children changing into beastly creatures, but symbolize something much deeper. Even if you’re not experiencing physical changes, I think this story is going to be relatable for many, because all of us undergo unexpected change at some point in our lives.

ScreamCap is a team of paranormal investigators live streaming their dives into the unknown to an audience of believers.

ScreamCap has a retro aesthetic with a Ghostbusters meets Scooby-Doo vibe, and I love it. Both the human and non-human characters have strikingly creative designs. Since the investigators are streaming, there’s a chat window within the stream, and it’s an innovative interface choice that I’ve yet to see in other visual novels.

Cyrano Val D’allaire, physician & occult scholar, takes a detour to the remote town of Squall’s Peak to pay respects to an old friend.

Enshrined is a short gothic kinetic novel about vampires; it features magnificent artwork by a talented visual artist who created the game as part of a semester project. The character designs are flawless and all of the visuals combined are eerie yet beautiful—the perfect combo for a gothic mansion in a secluded forest.

This new edition of Arcade Spirits features a twist on the original story, six new characters, and a minigame called Fist of Discomfort 2 to set the atmosphere for an 80s arcade experience. The feature that stands out the most in the game is that you can design your own enemy (or romantic partner, if that’s the route you wish to take). Also, you don’t have to play the original Arcade Spirits to enjoy The New Challengers, because it’s a new story!

Discard your sense of morality and enter the world of CORPSE FACTORY. An obscure website allows users to request a death. Victims supposedly receive a photograph of their own corpse before they are killed!

After a wildly successful Kickstarter campaign and months of eagerly awaiting the game’s release, CORPSE FACTORY is finally here, so now you can dive into this paranormal murder mystery and untangle the story. Fair warning, this game is violent and twisted, but the chilling synopsis is what makes it all the more enticing.

VN Game Den completed a demo review for CORPSE FACTORY which you can find here.

A GxB visual novel that explores a whimsical, yet dangerous world which blends the solarpunk and cyberpunk aesthetics into a unique adventure. As you follow the MC on her journey, pursue various love interests in a stand-alone story unique to that route.

Steamberry Studio, the creator of Changeling, brings another gripping story for fans. The developer’s previous work has been compared to a young adult urban fantasy book, but in the form of a visual novel where choices affect the outcome of the story. Gilded Shadows seems to be right up a similar alley, offering another intricate and compelling plot with a tremendous 100,000 words per route.