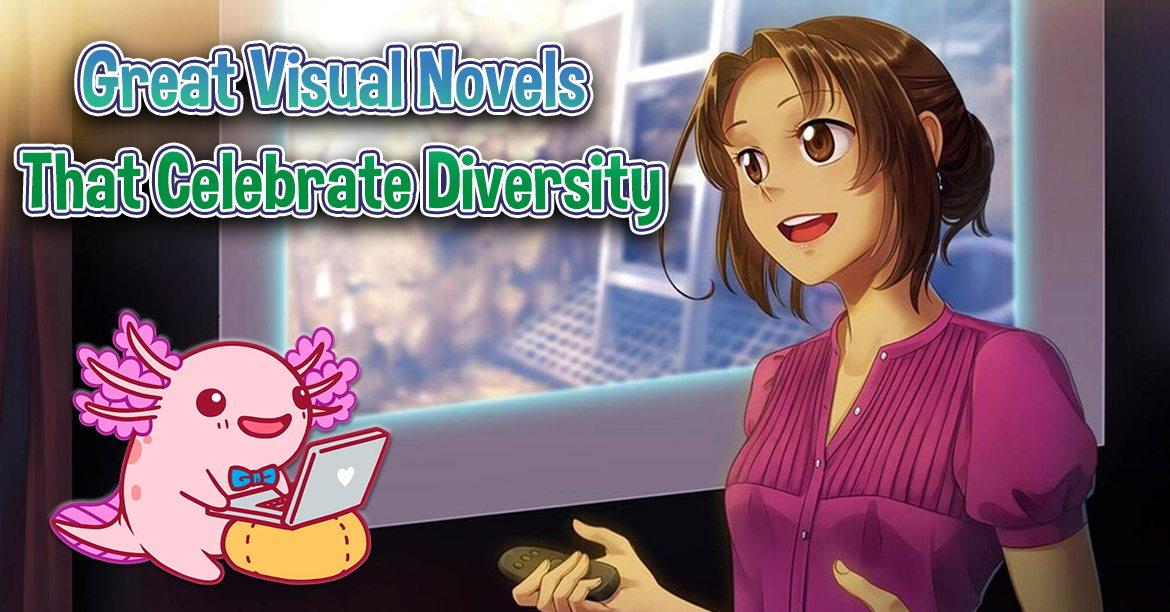 Diversity in visual novels is incredibly important. Today, I’m highlighting games in the genre that are not only great but also have great representation.

Representation is extremely important. Entertainment has come a long way by finally including non-white, plus-sized, and LGBTQIA+ characters that are not only main characters, but also aren’t stereotypes; they’re complex, relatable characters. When I released my game Loving You Fully, a short game featuring a young Black woman who has low self-esteem because of her weight, I was caught off guard by the amount of love the game received. I received messages from people who thanked me for finally representing them in a game. That’s when I realized just how important representation and diversity can be to people. While I think there’s more work that needs to be done, right now I want to give a shout-out to developers who’ve released diverse games with incredibly meaningful representation.

As a woman who identifies as asexual, my identity is nearly invisible in entertainment. There have been incidents in the media with ace erasure such as the CW’s Riverdale, where they changed Jughead, a popular asexual and aromantic character in the original comics, into a character who has sexual and romantic desires and feelings. Many aces were justifiably upset, because the one time they could see themselves reflected on screen, the television network behind the popular teen drama took that away from them.

Ace of Space features an asexual Black main character who identifies as non-binary. None of the characters judge the main character for their identity. Instead, they’re accepting of it and even ask questions so they can understand what exactly being non-binary and asexual mean. If you’re looking for a short, bittersweet title, then look no further than Ace in Space.

As We Know It

As We Know It is a post-apocalyptic dating sim by Jaime Scribbles Games, whose previous work was the murder mystery Pinewood Island. You play as a young woman named Ashlynn, whose entire life has consisted of surviving in a kill-or-be-killed world that was destroyed by the sun.

Thankfully, she and her mother have recently been taken in at the underground city of Camden, where resources are plentiful and the community works together to strive for a better future for themselves. Despite being wary of those around her, Ashlynn has to get a job and befriend the people of Camden. Who knows, maybe that wall she put up will crumble away as she realizes that not everyone in Camden is out to get her.

This game features character customization. While it doesn’t have a ton of options, it’s very nice to see the option to play as a tan or Black main character. On the subject of diversity, Camden is a melting pot with people from different backgrounds, sexualities, races, and ethnicities, who all have a story to tell. Typically in dating sims, you have to focus on the character you’re interested in. However, As We Know It emphasizes that you want to spend time with everyone in Camden. The side characters you form friendships with are just as important to achieve a satisfying ending in this game.

C14 Dating features a Hispanic protagonist, Melissa Flores, who is participating in an archaeological internship all the way in Belgium. Though she’s nervous about traveling so far away for a three-month internship, she finds solace in both her work and the other students participating in the internship.

If you’ve played any Winter Wolves titles, you’ll know that the developer is a fan of stat-raising, and this game is no exception. Over the course of the game, you plan out a weekly schedule to build your stats (Culture, Rational, Empathy, Diligence) which correspond to a specific love interest. For this article, I want to highlight the two of the main love interests: Shoji and Hendrik.

Shoji is an adorable, soft-spoken nerd that loves talking about video games. He’s a bit chubbier and shorter than the rest of the men in the cast.

Hendrik is essentially the group’s mentor due to his expertise in archaeology. He lost his right arm in an accident and wears a prosthesis, but that doesn’t stop him from continuing his work. He also identifies as asexual, and he still has a fulfilling relationship with Melissa if you decide to romance him.

Typically, you wouldn’t see characters like Shoji or Hendrik as love interests because they don’t fit into the “skinny and sexual” mold. So I’m very glad that the people behind C14 Dating included them!

In Limited Space, you play as Mars, a young Black man who’s stuck in his messy apartment by himself. Every day, it’s the same old, same old. He gets a call from his mother, who expresses her concern about Mars’ decaying mental health, but he brushes it off and spends the rest of the day playing video games. Then he goes to bed and the cycle repeats. It’s pretty sad, if you think about it. One night, Mars stumbles upon an alien in his bedroom. The alien explains that they can’t leave Mars’ apartment, so with nowhere to go, the alien stays with Mars and the two form a friendship.

With a year of COVID-19 under our belt, I feel like there are a lot of people in Mars’ situation: they feel like they’re stuck with no way out. So finding someone you can talk with no filter to amidst the darkness can really lighten up your day.

Limited Space is a short but endearing tale that’s free on itch.io, so you really don’t have an excuse to not play it.

Make It Last: While You Can

Created for the 2020 Summer Novel Festival and Yaoi Game Jam, Make It Last: While You Can follows the lifelong relationship between Jordan Min and Harvey Chapman. They’re living a cozy life with their daughter Charlotte. All is well and good until Jordan breaks the news to Harvey that his dad is in the hospital. Harvey refuses to see his father after an incident that happened many years ago. Charlotte, who has never seen her grandpa before, decides to go find him. This decision opens up the floodgates as we not only dive into Harvey and Jordan’s past together, but also what transpired between Harvey and his father.

The game is incredibly touching despite its short length. The game’s title, Make It Last: While You Can, shows a clear emphasis on time and cherishing things while you still have them. I also think the game is also about acceptance. Many members of the LGBTQIA+ community have a hard time coming out to friends and family for fear of rejection. And if you are shunned by your family for something you can’t control, it puts a distance between you and them that’s incredibly hard to close.

I’m very happy I played Make It Last: While You Can. It’s a beautiful story that I’ll be remembering for a long time.

The Space in Between

The Space in Between focuses on the Asian-American experience, mental health, love, and constellations. Miles and June decide to go stargazing, and during their time looking at the stars, they talk about life. It’s a very simple concept that’s executed perfectly.

During the game, you create constellations and say what they look like to you. Each constellation reminds June and Miles of different parts of their life. For example, there was one constellation that I said looked like Yakult, a Japanese drink. This had June bring up a memory of her going to the Asian grocery store with her mom. However, now that she’s an adult, she feels as though she doesn’t do anything Asian, like how she doesn’t speak Chinese to anyone, for example. She mentions how she’s lost a part of her identity without her parents there to guide her. She’s experiencing what many people from different ethnic backgrounds face when living in a different country: diaspora and cultural assimilation.

Miles talks about his mental health. He brings up his therapist and his struggle to reach out to others outside of June. As a man, he feels like he can’t ask for affection because it’s seen as unmanly.

Made for Spooktober 2020, this adorable visual novel follows Dori (whose name and pronouns are changeable), who has just failed a job interview. On their usual route home, Dori hears voices coming from an abandoned warehouse. Before Dori can hightail it out of there, they’re found by three monsters who are super friendly, surprisingly enough! The monsters offer Dori a job—which Dori gladly accepts, because who can resist some money? Over the next three days, Dori helps out the workers of the WereHouse to make sure that they’re a success on Halloween night!

Were|House features a Black-dominated cast, and all the characters are incredibly likable, especially the lovable werewolf Cormac, whose smile brings me so much joy. Though if the energy-filled Cormac isn’t your type, there’s also two more monsters you can smooch! Morag is a kelpie who’s the brain behind the operation, and Esseth is a non-binary gorgon who’s in charge of all the special effects in the haunted house and loves to pull pranks on the crew. I can’t recommend Were|House enough, honestly. If you love short, cute games then you’ll really enjoy this one!

Women of Xal is an upcoming political visual novel that I had the pleasure of playing all the way back in 2017. It was the first visual novel I played that featured a cast with only people of color. The diversity in the game as well as its story immediately hooked me.

The game takes place in the world of Xal. The world-renowned businesswoman Xuna Xaovant is holding a competition to name a successor, who will receive her inheritance and legacy. You and five other candidates are chosen, and you have to prove you’re worthy of taking Xuna’s position. You can either try to befriend the other ladies or use them as stepping stones in order to reach the top.

At the moment, the game is still in production, but it seems like it’ll be released sometime this year! There’s a demo you can play to hold you over. Even after all the years of waiting, I’m still very excited to see what this game has to offer!

Ace in Space As We Know It C14 Dating Limited Space Make It Last: While You Can Romance The Space in Between visual novel Were|House Women of Xal