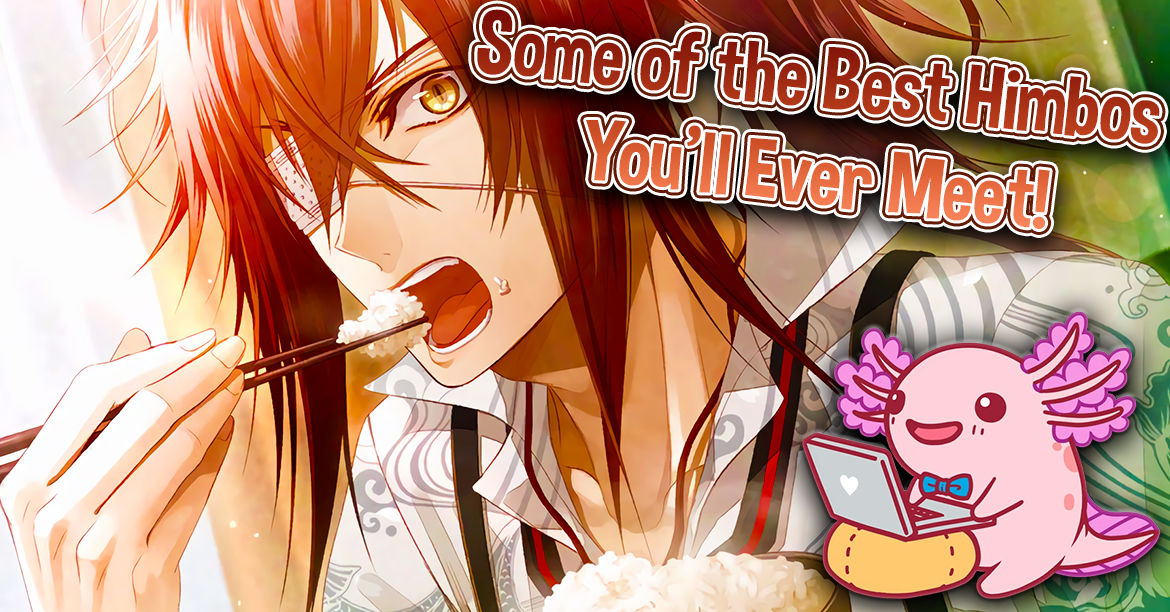 Some of the Best Himbos You’ll Ever Meet!

Happy April Fool’s Day everyone! With today being a light-hearted day, I figured it would be nice to focus on fun characters that manage to make us laugh and smile. Today, we’ll be focusing on some of the best himbos you’ll ever meet in visual novels!

For April Fool’s Day, I figured it would be nice to focus on the best himbos that visual novels have to offer. If you’re like me and pretty new to the term “himbo,” let me explain it to you. A himbo is a buff man who’s super sweet but doesn’t have a functioning brain. Despite having one working brain cell, these men try their best and always manage to make us smile. To try and make this list as accurate as possible, I went to Twitter and asked my followers for some of their favorite himbos in gaming.

Now, I’m going to break a rule here. Due to how few buff men there are in visual novels, I’m going to have to include skinny idiots on this list. I’m hoping that we can see more buff numbskulls in the future. So just keep that in mind when reading this list!

At first, Gonta looks like an intimidating fellow. His hair is unkempt and his muscles are so big that I’m surprised all the buttons on his shirt are still on. However, the moment he begins talking, he’s really just a gentle giant who can go on and on about bugs! His kindness goes beyond bugs, though. Despite the situation he’s in, Gonta is willing to sacrifice himself if it means his classmates can live. He’ll even go as far as protecting the debatably most evil character in the cast, Kokichi. Speaking of him…

In the non-canon bonus mode Ultimate Talent Development Plan, Gonta manages to befriend Kokichi Oma, a cold individual who uses people for his own good. Despite his evil nature, deep down, Kokichi appreciates Gonta for being so kind to someone undeserving of his kindness. If Gonta can manage to melt the ice around the Ultimate Supreme Leader, then he deserves a spot on this list!

When I played Code: Realize, the last person I expected to like was Impey. Typically, I found stupid characters to be incredibly annoying people. They often put the heroine or the rest of the main cast in danger because they’re dense. However, as you can tell, with me not only creating this list but also putting Impey on it, my opinion has changed dramatically!

Impey isn’t bright like the characters around him. He’s not a genius scientist like Victor or a grandmaster thief like Lupin. However, he’s a solid engineer and cook who’s always willing to put himself in danger for a complete stranger. He even has dreams of being the first man on the moon.

Impey is not only one of my favorites from Code: Realize, but he’s also the first character in an otome game to show me that there can be more to a himbo than just being stupid or wickedly buff. So that’s why he’s on this list.

Scott Howl is the purest boy on this list and he deserves to be protected at all times. Scott Howl from Monster Prom loves everyone around him, from his friends to furries who can make him their king if you encourage him enough.

In every playthrough of Monster Prom, you’ll no doubt encounter a situation involving Scott. While Scott is a werewolf with a big heart, he often finds himself in odd scenarios that he can’t fully comprehend the gravity of. For example, there is a route involving him and Polly where they want to be the ultimate pranksters. At first, it seems harmless. After all, what can go wrong with a prank or two? However, if you successfully help them with their prank, they end up destroying the world.

Despite bringing the world to an end, you can’t help but love him. Unlike the other romance interests in Monster Prom, he’s the only one that doesn’t require you to level up the five stats in the game. All you need to do is win his heart by making the correct choices. It shows that he’ll love a person no matter who they are: intelligent, sexy, wealthy, bold—none of that matters to him. As long as you’re a good person, he’ll see you as the perfect romantic partner!

Achi Endo is a former gang leader turned environmentalist. During his daily walk through the neighborhood where he’s picking up trash, he encounters a tense trade-off situation involving a young woman named Hitomi and a sketchy-looking guy. However, Achi doesn’t know that. All he sees is a young woman around his age who looks like she’s in danger. So without really thinking, he goes and makes sure Hitomi is okay. This one choice turns Achi’s normal day into a crazy adventure where his ultimate goal is making sure Hitomi sees the end of the day.

Achi isn’t the brightest bulb in the box. Often times, he uses words wrong or can’t remember sayings. He dives headfirst into danger sometimes, which can lead him to getting hurt or even killed. You question how or why someone like Achi is trying to play hero. Why doesn’t he just quit? Without spoiling the reason, he can’t quit. He has to see everything all the way through. So even if Hitomi wants to give up, he won’t let her.

I tend to go on tangents about 428: Shibuya Scramble and why everyone should play it. The impeccable cast of characters is one of the things that makes the game so great, and yes, that includes Achi. Achi may seem like a complete idiot, but his drive is what makes his character shine.

Much like Achi, Mineo Enomoto often dives headfirst into situations without really thinking, which can be a detriment to himself and others around him. He’s even suspicious of the game’s heroine, Ichika Hoshino, believing that she’s affiliated with the game’s antagonists, Adonis. However, as time passes, his suspicions disappear and the two begin to form a relationship.

At first, the heroine feels insignificant compared to Sasazuka, Okazaki, and Yanagi, who are all the best the police force has to offer. Ichika feels like she has nothing to contribute to the conversation when the three are talking about Adonis and the ongoing X-Day case. However, with Enomoto, she can tell him what she’s thinking without reservation because she sees him as her equal. It’s incredibly heartwarming to see!

Outside of their work relationship, Enomoto gets incredibly nervous around Ichika. He stammers, and while he finds this embarrassing, I can’t help but find it cute. Despite being a cop who can find his way through a fight, he’s still a softie at heart. A lot of people really enjoyed Enomoto’s route when they played Collar x Malice, and who can blame them? He’s amazing. So, that’s why he’s crowned the #1 Best Himbo!