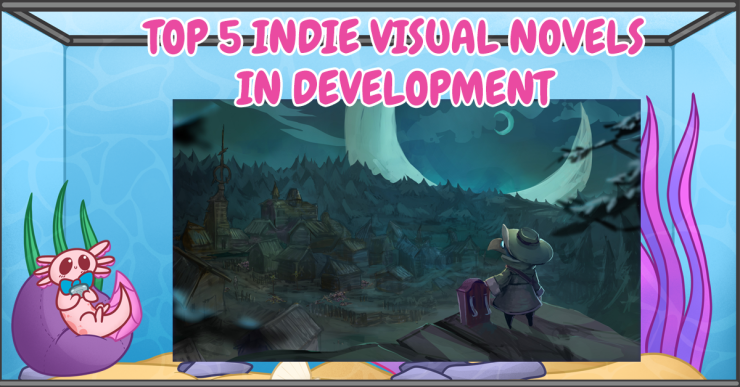 A top 5 countdown of VNs currently in development.

Today we are going to zero in on five indie visual novels that are currently in the works, and we’ll also talk cover what makes them special.

Disclaimer: My rating system for the top 5 in this article is mostly based on which games were in development longer or projected release dates; this article doesn’t seek to claim any of these games are better than the other.

Customize yourself and your lover, and go on an adventure together in Cante, the land of hearts, a world full of magic that connects to many worlds.

Take the path of a ruler, traveler, dragon hunter, and much more!

Cante is an adventure romance game with an interesting premise. The game allows players to customize both the MC and the love interest. Aside from that, the most notable aspect of this game is the artwork, which showcases extravagant designs for dragons and fictional creatures and places. I’m always impressed by visual novels that take their artwork to this level of imagination, so I will 100% be following this project’s development.

This game is currently in the works for a prototype to be made. If you are interested, you can follow their Kickstarter pre-launch page.

The Good People (Na Daoine Maithe) is a lore-rich, choice-driven visual novel inspired by Irish myths. Venture into Tír na nÓg, the Celtic Otherworld, in order to retrieve your family’s stolen valuables… and get swept up in deadly fairy politics and a whirlwind romance along the way.

The Good People is an LGBTQIA+ visual novel/dating sim featuring storybook-like artwork and tales that derive from Irish mythology. There’s a good variety of love interests with different pronouns, skin tones, and personalities. I appreciate seeing this kind of diversity in indie VNs, and I’m especially excited to see a new fantasy game on the map, especially one that explores Irish myths, because that’s something I haven’t seen done before.

This game just recently appeared on social media, with the demo having been published to Steam and itch.io in early August. So far, I’m impressed at how polished it is, so I’m excited to see what’s next for The Good People.

Not Involved is a dark fantasy/horror visual novel about Doctor who balances between helping others and taking care of himself.

Spooky season is rapidly approaching, so I found it necessary to include visual novels that have an eerie theme. Not Involved’s storyline is certainly on the darker side of things, but if you’re a fan of dark horror and rich lore, this game is for you. The artwork in this game is absolutely phenomenal, and in combination with the epic and foreboding orchestra soundtrack, you are truly immersed in the grim world the creator has imagined.

I can’t stress enough how generous the developer is with artwork. This game is decked out with full-blown CGs from scene to scene, and it’s a real treat for the eyes. If you like art, please check this game out!

Escape the confines of high-society and find freedom, romance, and danger on the high seas as a privateer in this pirate otome. A historical fiction visual novel set in the early 17th century, travel from Spain across the Caribbean while surviving life at sea.

Number two on the list is The Spanish Privateer , an adventure otome game that brings an exciting flare to the indie VN world, as it is set in the Caribbean and features love interests that are pirates. This game shines at bringing cultural diversity to otome games. One of the captains in this game, Captain Rico, is from Puerto Rico.

Historical fiction fans will be elated when this game releases, which is expected to be sometime this year; the story is expected to contain 227k words. You can read VN Game Den’s review of the demo here.

Trapped in the dying Appalachian mining town of Scarlet Hollow for the funeral of your estranged aunt, you quickly find yourself at the center of a dark mystery that threatens your life.

Scarlet Hollow is a dark comedy-horror, and while the blending of those genres is rare, when done by the right creative minds it can produce a spectacular piece of work. Scarlet Hollow is a visual novel that is just that. The episodes so far feature ghostly artwork and a highly compelling story that draws you in from the start. There’s a dire need to know what secrets lie ahead in the small town known as Scarlet Hollow.

This game is currently in early access and is released one episode at a time.