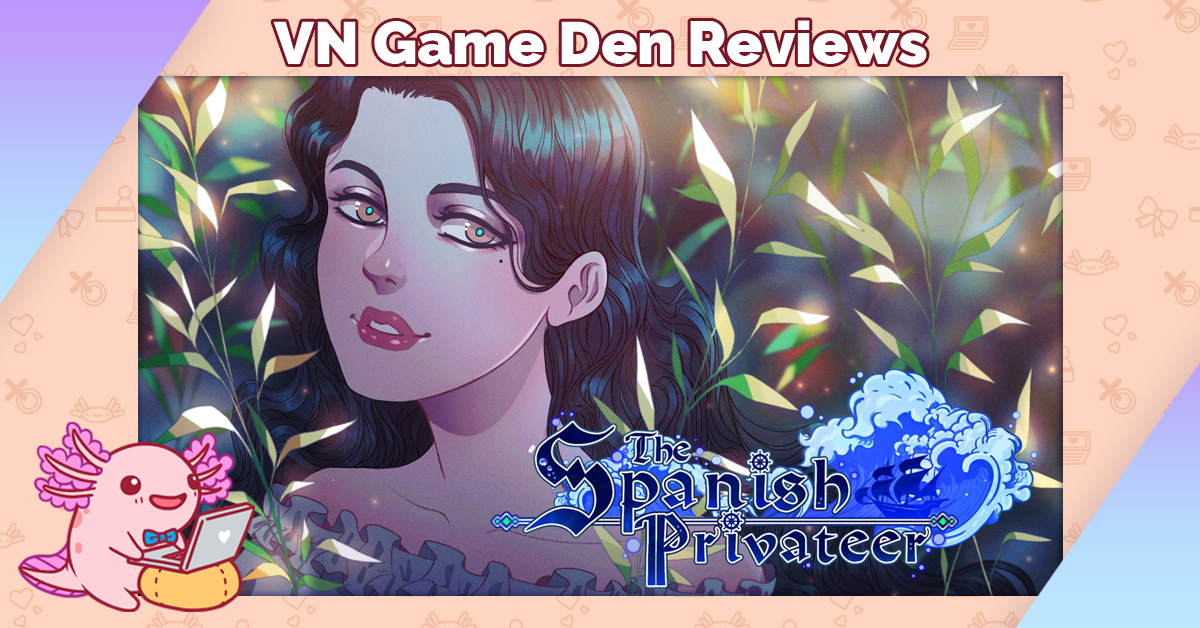 Take the role of Carlota as she embarks on her new life as a pirate in this otome game, recently fully funded on Kickstarter, in development by SinSisters.

The Spanish Privateer is an otome game in development by SinSisters. Take the role of Carlota, an eighteen-year-old who chooses to run away from an arranged marriage in favor of becoming a pirate. Romance one of three members of your new crew, battle with the morality of living life as a pirate, and choose Carlota’s personality in this visual novel that was recently fully funded on Kickstarter. 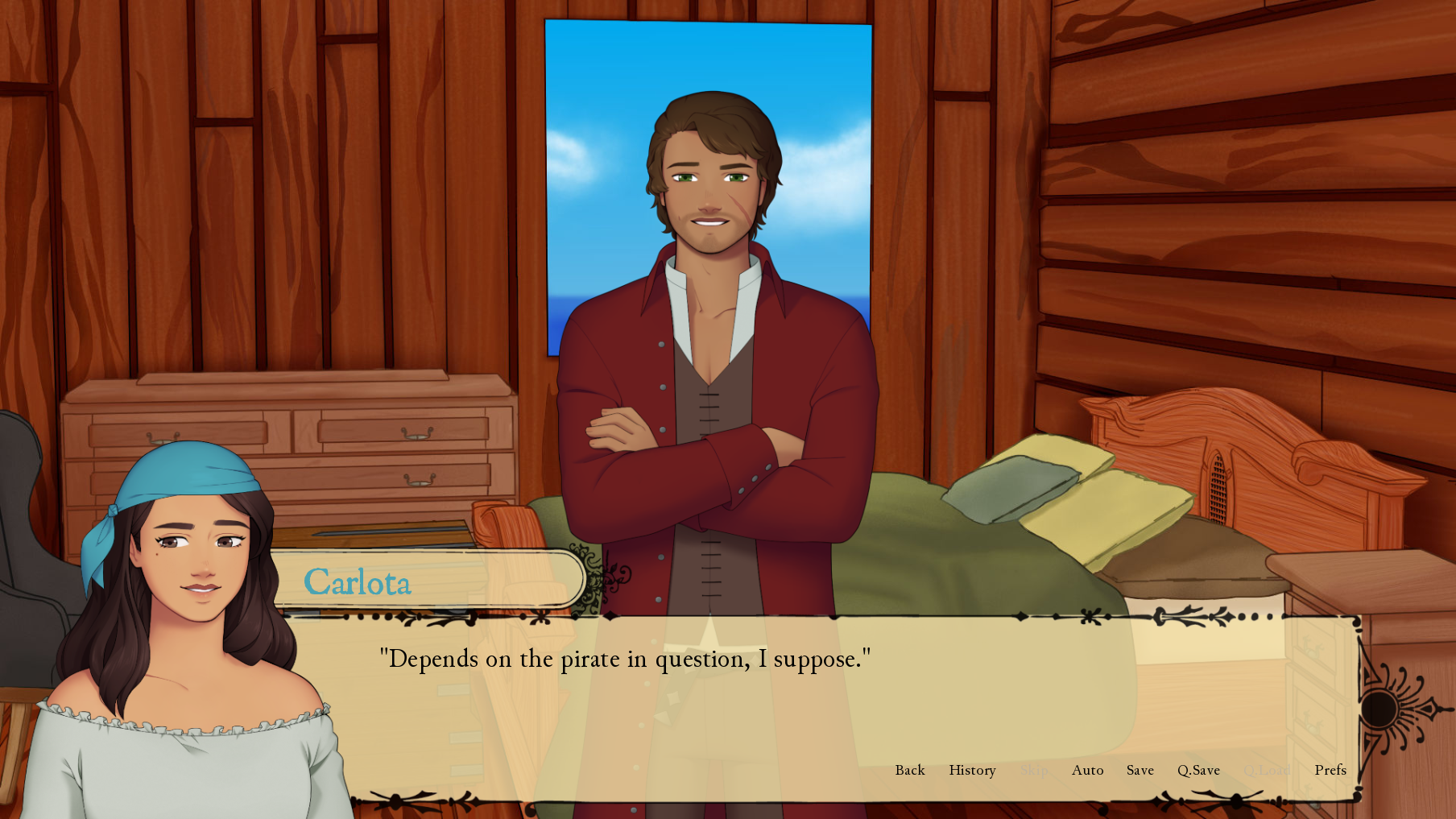 The Spanish Privateer is an exciting and refreshing take on a pirate’s tale. You play as Carlota, a determined and strong female protagonist, whose personality you can further determine through dialogue options with the other characters. Even when Carlota’s answers are submissive, she still has an air of fierceness to her which leaves for a fun and immersive tale. She is no damsel in distress, and I have a feeling in the full version of the game she’ll be doing some saving of her very own.

In the demo of The Spanish Privateer, we get a pretty good idea of who the potential love interests are: the gentle and kind captain, Rico; the serious and stony first mate, Flint; and the flirty, smooth-talking bard, Lark. All three have very defined personalities from the very beginning and seem to have more to them than meets the eye, but unfortunately, we’ll have to wait until the full version comes out to uncover their true motivations.

The story is written with careful attention to the setting. Dialogue stays true to the time period, while each character still maintains their own voice. There are explanations of things the player will need to know about how pirate ships operate, such as the different locations, but it is presented in a way that doesn’t read like an entry in a textbook. 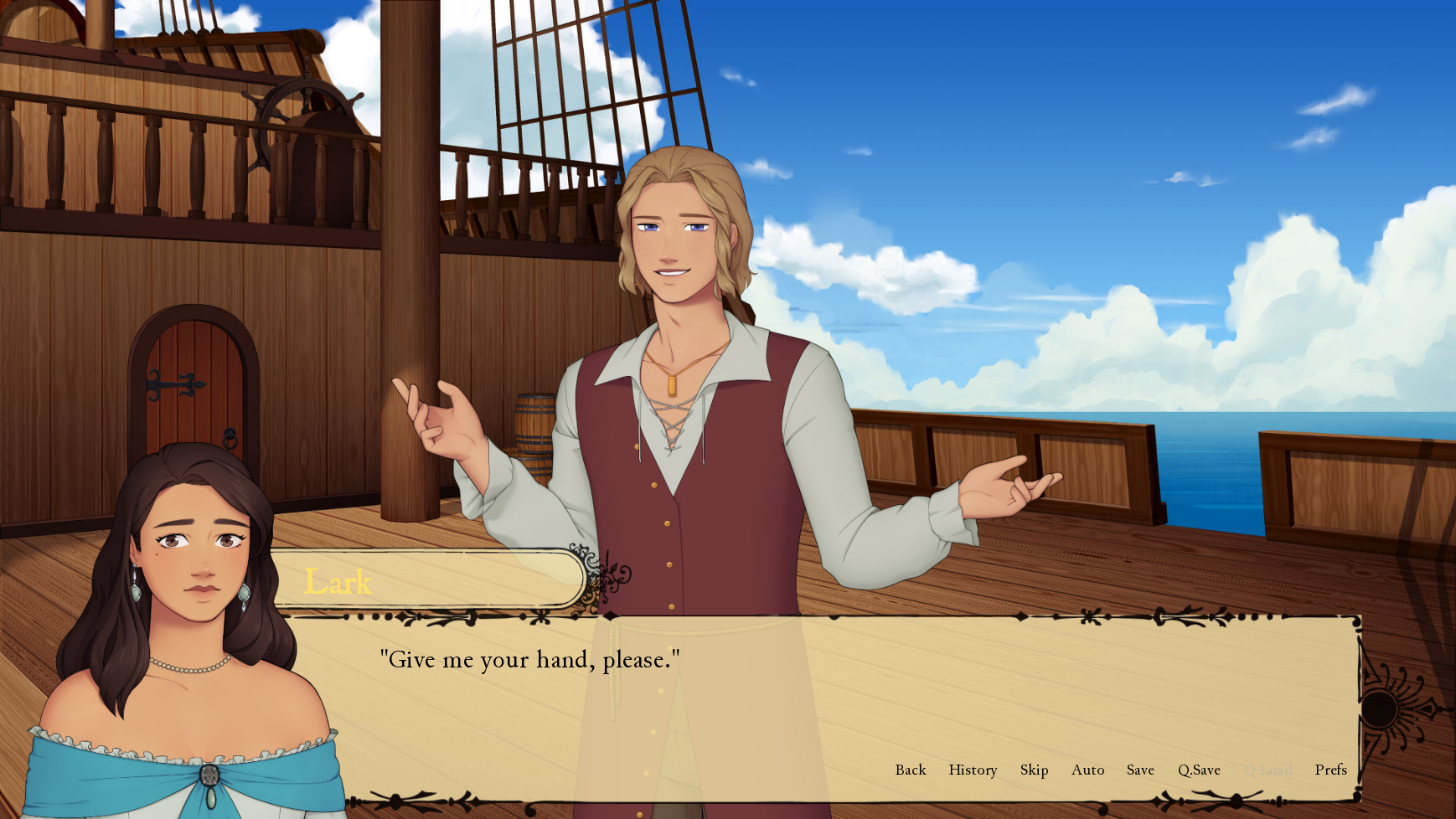 Unfortunately, some of the art assets in the alpha demo of The Spanish Privateer are placeholders, so I can’t make a judgement on how they’ll look in the final version of the game. I will comment on the sprites, however, which look really great. Carlota gets an outfit change, some of the guys change their poses, and there are both full-body and side images of our main character.

The music is fitting and actually makes me a little more excited to play the game. The pirate-themed background music really helps me feel like I’m on the ship with Carlotta and the other pirates. If this is just the alpha demo, I can’t wait to see what SinSisters does with the full version of the game.

The game is not without some faults, however, such as the quick pacing of the story when Carlota asks to board the pirate ship. Once the narrative gets rolling, though, they’re easy to overlook, as the overall story is really interesting and well done. If you’re a fan of otome games, I’d definitely recommend The Spanish Privateer. There are three handsome love interests to choose from, a unique pirate setting, and a strong female protagonist.

You can get the demo on itch.io.