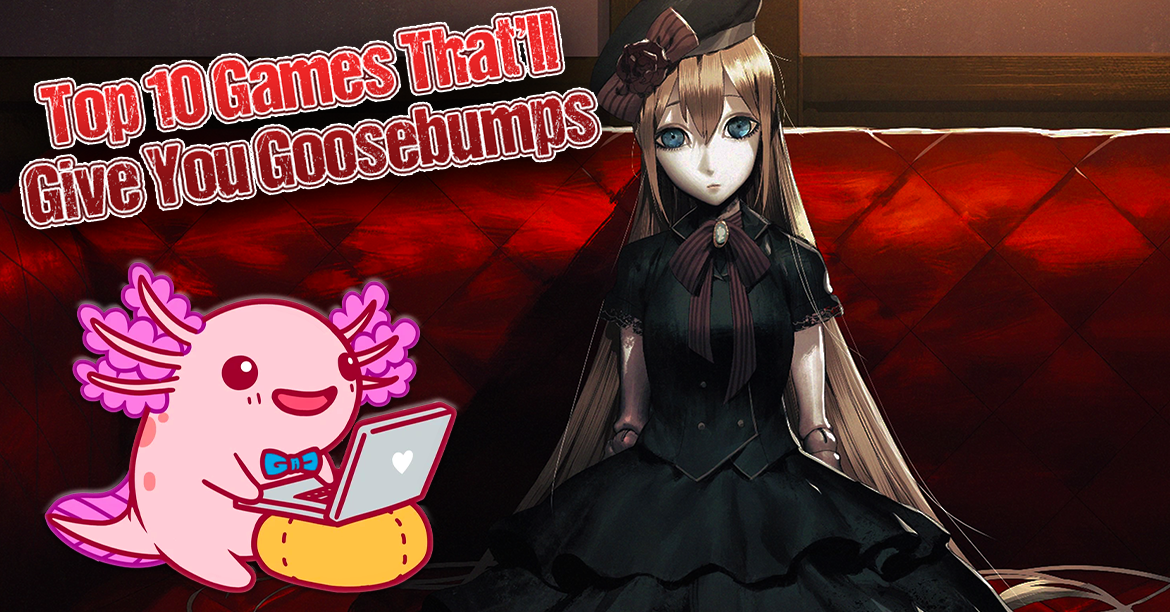 Listen, I know it isn’t October yet, but who doesn’t love a good spooky game? In this list, I’ll be giving you some good thriller and horror visual novels that’ll give you goosebumps.

Listen, I know it isn’t October yet, but who doesn’t love a good spooky game? While I love my dating sims and slices of life, I need some thrills too. Thankfully, there are a ton of horror and thriller visual novels that’ll fulfill that need for spook-lovers like me.

Disclaimer: This list is in no particular order! So if your game is listed at number ten, it doesn’t mean it isn’t as good as the game at the number one spot.

Dead Wishes appeals to an audience that’s looking for twisted romances rather than something cute.

You play as a young, broke adult whose parents tragically died. With the threat of eviction, you’re forced to go find a job in an unkind world that’s ready to take advantage of anyone who’s desperate.

I played through this game with my friend, and we both have what I called nerves of steel; we don’t get scared or uncomfortable very easily. However, while playing Death Wishes, we both got increasingly more uncomfortable throughout the games’ 12 routes. From being held captive with no way to contact the outside to getting a nice job at a store that honestly sounds too good to be true for a game like this, you’re going to get something different with each character.

If you’re one of those people looking for a dark “dating sim,” then look no further than Dark Wishes.

You can also check out VN Game Den’s review of Dead Wishes for more info.

9) Your Turn to Die: Death Game by Majority

If you’re a fan of Ace Attorney, Danganronpa, or Zero Escape, then you will feel right at home with the free episodic game Your Turn to Die. You play as Sara Chodin, a normal high school girl who is one day kidnapped and forced to participate in a death game where she and ten other participants have to vote to kill someone in order to escape.

While not your typical horror game, the tension and the situations that the characters are placed in can unsettle players and make them worried about what else this death game is going to throw at them. Sometimes, horror doesn’t have to be a scary monster chasing you; instead it can be something as simple as someone’s greedy actions in a very intense situation that can cost you and your peers their lives.

The game is released in chapters that divert onto different paths depending on the choices you’ve made so far. The final chapter hasn’t been released yet, but if you do play this game, I promise you that you’ll be dying for the next part. Plus, for the price of free, you can’t go wrong!

Death Mark‘s story is as it suggests. Tokyo’s H City is hit with a curse in where its inhabitants start to see a strange crimson mark on their body. At dawn, they die a horrific death. Your character, an amnesiac man, arrives at a mansion. When he enters the dark home, he meets a porcelain doll named Mary. She informs him that he can be freed from the mark, but only if they can find the true source of it all.

There are six chapters in the game, and in each one, you are required to explore a haunted area with a partner of your choosing who also has been marked. During these sections, the game turns into something like a dungeon crawler where you’re exploring and searching for items and clues that’ll lead you to solve the mystery. Of course, you aren’t safe. You are faced with choices that are called “Live or Die” decisions. If you make the wrong choice, you guessed it: you die.

What makes this game truly horrifying is its sound design. While exploring the different areas in the game, you’ll hear faint whispers and footsteps, making you wonder if you and your partner are truly alone. Little things like that make for a great, spine-chilling atmosphere. The game relies not on jump scares but rather its environment to make the player petrified. It’s a welcome change of pace from what we regularly see from horror games.

Tokyo Dark is a point-and-click visual novel that delves into the story of Detective Itō Ayami, who is looking for her missing partner, Detective Kazuki Tanaka. What should be a straightforward missing person case turns into something much twisted. As you get closer to the truth, Itō may find herself inching closer and closer to insanity as a mysterious red-haired woman begins to appear. Personally, I found the mystery pretty gripping.

What makes this game very interesting is its SPIN (Sanity, Professionalism, Investigation, Neurosis) system that causes you to gain or lose points in each respective trait depending on your choices, big or small.

The game is relatively short, clocking in at four hours. However, there are 11 endings to experience. So, if you’re finding yourself wanting to dip into the unknown in modern-day Japan, then take a peek at Tokyo Dark.

Zero Escape is my favorite piece of work done by writer and director Kotaro Uchikoshi, and when the first two games of the trilogy got re-released, I found myself recommending Zero Escape: The Nonary Games to my friends who haven’t played it. If you happen to be one of those people who haven’t played Zero Escape, allow me to explain its plot really quickly.

In the first installment, 999, you play as Junpei, one of the nine participants forced to play the Nonary Game by the game master, named Zero. You’re told to get to a door marked with the number nine in under nine hours or else you’ll die.

The sequel, Virtue’s Last Reward, follows a very similar concept. You play as Sigma, who is also forced to play the Nonary Game: Ambidex Edition. Rather than go through doors in order to get to the exit, you need to get nine points. You get these points by voting for or against the player you’re pitted against in each round of the game. Get 9 points and escape is yours. Reach 0 points and your life is forfeit.

The writing is so detailed, especially when it comes to describing each death the player character sees. It’s not a horror game per se, but the tension of being in an isolated environment with complete strangers while playing a death game is bound to keep any player on the edge of their seat.

5) Higurashi: When They Cry

Higurashi: When They Cry is a series of sound novels, a type of visual novel that focuses more on atmosphere building and sound design than visual elements. You’re in a small village known as Hinamizawa that’s over in the countryside. In June, someone goes missing and someone else dies. These series of events seem to be connected to a dam construction project that was cancelled for unknown reasons.

As you play through the chapters, all of which you need to purchase separately, you begin to find out what’s going on in Hinamizawa. Is everything just a conspiracy theory brought on by bored villagers looking for a thrill in their small, desolate lives? Or is there something truly sinister lurking behind the scenes?

There’s a reason why Higurashi is one of the most popular horror and mystery series out there. Honestly, I really recommend it, even if you’ve watched the anime. It’s a story that’ll stay with you for a long time.

In Raging Loop, you play as Haruaki Fusaishi, who gets stuck in a village named Yasumizu after a small accident with his motorcycle. However, what should have been a quick stop ends up turning into a prolonged stay.

The next day, a dense fog begins to envelop the remote settlement and no one can leave. The mist can only be lifted once a ritual called the “Feast” is completed. The ritual is the game’s take on the popular deduction game Werewolf: werewolves have sneaked into the village, killing a villager every night, and it’s the remaining villagers’ job to find out who the werewolves are and hang them.

You could try to escape, but that would only result in death. So, with no way to escape, you are forced to participate in this game and bring the truth to light. It’s a tense psychological thriller that keeps you on your toes throughout the entire ride.

Lake of Voices follows Kikka as she tries to cross the treacherous lake known as Sinnlos. Beneath the murky depths below are monsters that are ready to take anyone crossing the bridge into the waters with them. However, despite the danger that the lake presents, Kikka has to cross that bridge, and she’s not the only one: along with her are Bemelle, Margret, and an unnamed individual known as The Guide.

While anyone can be saved, not everyone can be, and the game emphasizes this very quickly. There are split-second decisions that the player needs to make that could result in the death of Kikka or one of her companions on this journey. The sound design and art are both wonderful, adding to the uncertainty and dread that this kind of adventure would bring. Check out Lake of Voices and see if you can make it to the other side of Sinnlos.

Cupid takes place in 18th-century France, focusing on Rosa, whose life has been a traumatic one. Without spoiling much, she eventually meets a kind woman named Catherine who comes to her defense at a fancy party. Just as Rosa starts to finally get close to someone, Catherine is found dead. The details around her passing are dubious at best. It’s your job to figure out how Catherine died.

Cupid combines gothic horror, romance, and many other sensitive topics into a beautifully crafted game that asks one question: is love a blessing or a curse?

According to rumor, the Ermengarde Mansion is haunted by a vengeful spirit. Despite that, the mansion is being put up for sale. However, when Isabella arrives to finalize the sale, she finds a letter with the words “help me” scribbled in blood. The discovery of this letter soon reaches the six other main characters. Then, they all begin to see a twisted spirit haunting them in the shadows.

The Letter is fantastically produced, featuring superb voice acting, great art, and a gripping story that’ll have you coming back for more thanks to the extensive branching paths the game has. Every little decision can affect the story of the game, determining who lives, who dies, and who gets together.

I recommend checking out The Letter. It’s one of my favorite horror visual novels available currently that’ll have you looking over your shoulders when playing.