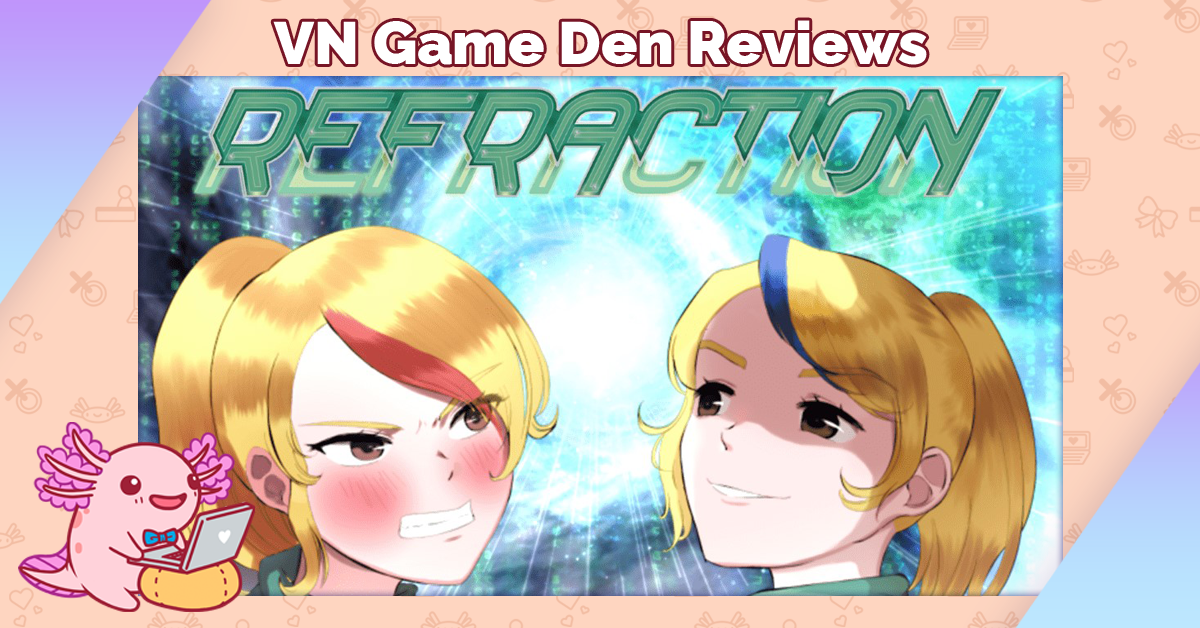 Refraction is a soft sci-fi visual novel about college student Jackie Shields, who wakes up to find herself in a parallel dimension.

Read about this new visual novel that released today on Steam!

Refraction from Universe Zero is a soft sci-fi visual novel about the past, present, future, and the multiverse in-between. College journalism student Jackie Shields wakes up one morning to find that the world around her isn’t quite how she left it. She quickly finds out that her choices aren’t just her own, and the consequences could be dire for more than just her dimension.

Refraction was provided to us free as an advance copy for the purposes of reviewing.

Fun Playing with Tone and Presence

From launch, the game has the player questioning the nature of the reality they’ve been thrust into. It sets the expectation early to stay on your toes because things might get a little weird. And a little weird they are.

Wending through the story at the early parts of the central conflict, however, some of the observations of the weirdness can get a little heavy-handed. There are a few really excellent subtle hints as to what’s happening. The already interesting use of tone, however, really could have benefited from a more understated weirdness right when things were starting to ramp up and trusting the reader a little more to pick up that something was slightly wrong before totally confirming it at the end of the first day.

All that being said, the game does an excellent job of taking what could be a confusing structure and making sure you, as a player, are properly oriented in the timeline without sacrificing narrative cogency.

Natural Writing with a Charismatic and Diverse Cast

While the plot is very, very strong and well-constructed, the writing overall is a little bit of a mixed bag in places.

The character writing is generally very good. Jun’s pop culture obsession and cynical worldview come from a very natural-feeling place. Paul’s more intellectual religiosity isn’t played for laughs and feels true to his nature. Even the minor characters have very strong opinions about what’s happening around them. Even though we really don’t spend a lot of game time with these characters, their intrinsic nature pops through, leaving you with a more robust understanding of their character.

Having such a racially and culturally diverse cast also does a great job of portraying a more variegated and interesting world where people of different backgrounds can work together to dismantle broader systems of oppression.

It did often, though, feel like a few different stories were happening at once alongside each other. While it’s reasonable to expect an average college student to be able to compartmentalize the aspects of their life a little, when things do sort of cross over each other at the very end, it feels a bit disjointed and unexpected. With as much emphasis as the game puts on the cascading consequences of choice, one would expect a little more cross-pollination between the different plotlines.

Overall, despite a few minor one-off phrases and bits that broke my personal immersion for just a moment, it was a genuinely delightful read.

A Bit of an Aesthetic Hodgepodge

The art is another place where it’s hard to pin down an exact impression. The sprites are simple, but fun, and they work well as an ensemble. The backgrounds are well-constructed and lovely. The complexity of the bedroom and workshop scenes in particular have some great environmental storytelling in it. The UI, while a bit hard to decipher in some places, is very sleek and sci-fi. But all these parts don’t necessarily mesh together well, and it’s hard to glean the personality of the game from screenshots of the art alone. The UI reads very sci-fi and high-tech while everything else speaks to a softer slice-of-life romance. While other, still as yet unplayed, routes might lend themselves to something more in line with that promise of hard sci-fi, as it stands so far it sometimes feels like two aesthetically different games walking alongside each other instead of one solid visual coherency.

An Expansive and Interesting Look at Choice

A lot of visual novels tout their focus on choice, but this is a game that actually fulfills on that promise. There’s a pervasive ongoing dialogue on the nature of choice, the butterfly effect, fatalism, purpose, and how all these ideas intersect and blend together. From a visual novel meta-construction angle, it frequently asks the question, “What route do you take?” Moving back and forth across multiple dimensions adds a new, interesting layer to the ludonarrative interaction that causes the most avid visual novel player, like the reviewer, to really reconsider their own relationship with the medium.

Refraction is a complex, intricate story about the ramifications of our actions and our own perceptions of said actions. It asks the question, “Does choice really matter?” but lets the player answer it themselves.