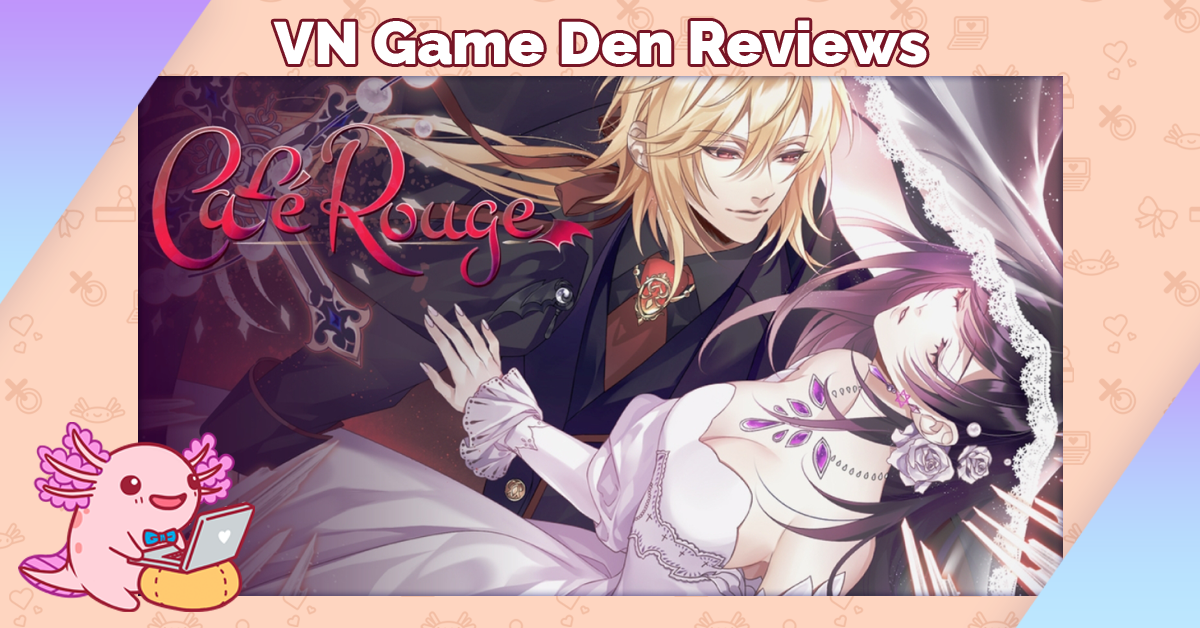 Café Rouge is an otome visual novel by Sonya Fung. You play a teenager named Isis Black who takes on a part-time job at Café Rouge.

Read our review about this visual novel and learn about the compelling story and strong cast of characters!

Café Rouge is an otome visual novel by Sonya Fung and a remake of an earlier version released as a Flash game in 2012. You play a teenager named Isis Black, whose normal life is abruptly disrupted when she takes on a part-time job at Café Rouge, only to learn that the quiet café has a dark secret—it is owned and run by a staff of vampires, who open it up for their vampire clientele at night.

Since humans aren’t supposed to know about the existence of vampires, learning this secret puts Isis in danger. Antoine, the owner of the café, promises not to tell the vampire authorities that she’s learned about them if she agrees to continue working at the café so he can keep an eye on her and ensure she doesn’t tell anyone else. And so, Isis’s new life working part-time at a vampire café begins.

The remake has been completely redone with beautiful art for its characters and environments, as well as numerous CGs unlocked at key points in the story. Although the original 2012 version included cooking mini-games, those have been entirely removed for the remake, putting the focus wholly on the story and choices. Currently, three characters are available as romance options, each of whom has his own secrets to be revealed across the course of his route. These three possible love interests are Isis’s best friend, Valen; the owner of the café, Antoine; and the student teacher at Isis’s school, Ron. New romance routes for side characters are planned to be added at a later date.

While there is no “true route” in Café Rouge, playing through all three routes is necessary to fully understand the story. There are a lot of mysteries surrounding the café and Isis herself, and each route reveals part of the truth. The romantic chemistry between the characters doesn’t always work—Ron’s route in particular feels like they go from a few friendly conversations to suddenly declaring love for each other despite the age and power gaps between them—but the characters themselves are likable and the story is exciting.

A vampire café is an interesting plot premise on its own, but the stakes get higher the further you read, and several characters have their own dark stories to tell. Beyond the numerous mysteries and secrets, vampire politics also come into play, as there is a struggle between two conflicting groups of vampires. This also overlaps with real-world politics, and while it’s perfectly logical that vampires hidden in human society would have political interests, the presentation of these elements feels strangely like the dialogue is better-suited for online political arguments than the vampire romance mystery in progress. Fortunately, this only happens a handful of times.

In fact, that ties to a different issue Café Rouge has, which is the quality of its writing. While the story is good, there are numerous grammatical issues throughout. Comma splices are the most common problem, but there are also some clunky phrases and awkward sentence constructions, leading to lines like “I’d done murder” and “His chest breathed up and down.” It feels like it could have used one more pass to smooth out some of the text.

It’s also missing a couple features that are standard for visual novels, such as a CG gallery and the ability to skip only text you’ve already seen. Without the latter feature in particular, subsequent playthroughs force you to either click through all the dialogue again or skip through it and hope you notice when you reach a new scene in time to stop it. This issue is compounded by how difficult it is to get reach a good ending. Choices not only determine which character you romance, but also whether you see his good ending or bad ending, and the reasons aren’t always clear.

My playthrough soon fell into a predictable pattern: I’d start a new route, be gripped by the story as I worked my way through to the end, get a bad ending, and then be forced to try again over and over in an attempt to find the seemingly arbitrary choice keeping me from the good ending. Even once I got the good endings, I still wasn’t entirely sure why.

While Café Rouge definitely has flaws, it also has a compelling story and a strong cast of characters. If new character routes are added, I’d certainly return for more.

You can buy Café Rouge from Steam or play it for free at CloudNovel. The CloudNovel version is 100% playable for free if you can play a route in a single sitting, but will require a small in-app purchase to save your game. The Steam version launched with a bug that also required you to play it in one run, but that has since been patched.