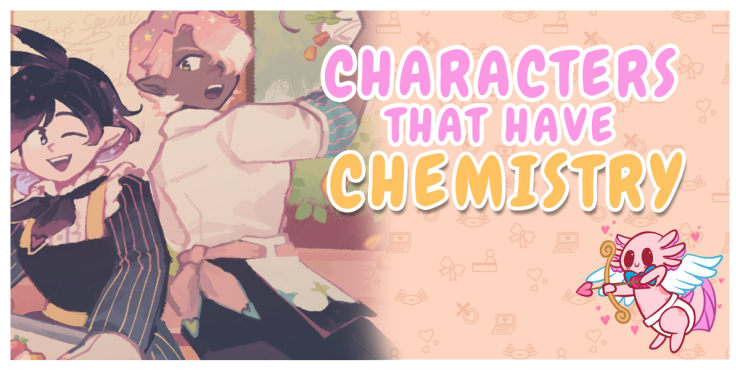 Characters That Have Chemistry

Check out these visual novel characters that make an excellent pair!

With Valentine’s Day around the corner, I am going to be talking about characters that have undeniable chemistry between each other.

If you played Deliver Us From Evil, then you were probably disappointed when you realized Keldran didn’t have a route (yet). You also might have picked up on the hints that there was something between Keldran and Ace. It is clear as night and day that there is history between the two, and those suspicions are put to rest when you play the prequel, Deliver Us From Evil: Masquerade.

In Deliver Us From Evil: Masquerade, the developer’s Spooktober 2021 entry, the original protagonist Ariel is removed and the story focuses on the love between Keldran and Ace—yay! (Sorry, Ariel.) Needless to say, it took me by surprise how much it reveals about their individual characters as well as the history between them. I won’t spoil this because it’s such a short game; if you haven’t played Deliver Us From Evil: Masquerade or the original game, then now would be the time to do so.

There’s something so pure about Ashton and Isabella’s affection for each other, and that’s probably because it starts off so bright and cheerful against the backdrop of the sinister happenings in Luxembourg. They’ve been friends for a while, and it’s clear they have feelings for each other but haven’t mustered up the courage to confront them, at least not in the earlier parts of the game.

Very quickly into The Letter‘s story, tragedy ensues, and I think that the threat of horror that looms over the entirety of the story makes you hang on the edge of your seat, hoping that Ashton and Isabella still have a chance at a happy ending. It’s that very tragedy and mixture of emotions that somehow makes the romance sweeter, especially when there’s a love triangle in the mix with their close friend Rebecca.

Remerie and Somnia from Cafe in the Clouds are a dream match, and even more so considering their names are both kindred to terms of sleep. This is my favorite duo from this list, and they’re proof that opposites attract when it comes to Somnia’s upbeat energy in contrast to Remerie’s composed demeanor. These two have a lot of great things in common, from cooking to helping clients that suffer from troubling nightmares. This is a virtuous task for them to take on, and it says a lot about their characters and the chemistry between them.

What’s inspiring is that their relationship is incredibly wholesome on so many levels, and it’s what I love most about them. Romance hints are peppered in here and there, from Somnia’s sweet compliments to Remerie’s nervous blushing, but overall that is the extent of their romantic endeavors, and it’s heartwarming. It’s clear they have respect for each other, and have been friends first and foremost for some time. True chemistry and romance brews from a solid foundation of friendship and common values.