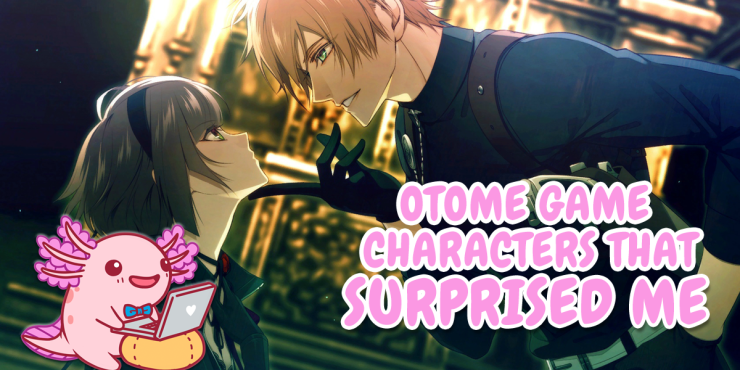 Otome Game Characters That Surprised Me

These are some of the otome game characters that shocked me.

Here are a handful of otome game characters that took me by surprise, some even downright shocked me. Be warned that there are some spoilers in this article, so tread carefully if you haven’t finished any of these games.

When I started playing Hakuoki: Kyoto Winds, I went in without knowing exactly how many love interests there were going to be (there’s a lot). Chikage Kazama makes an appearance early on, and it’s no secret that he’s one of the villains of the story, or so it seems. Yes, the initial encounters reveal his cold-hearted nature, as to be expected of a demon, as he wrecks havoc and threatens to kidnap Chizuru; it’s all in an effort to marry her so she can bear pure-blooded demon babies. I’ll admit, I was startled by the intensity of his pursuit.

During my initial playthrough I remember learning that Chikage was in fact a love interest, and knowing his motives made the prospect all the more interesting. What on earth kind of romantic developments would come from this kind of love interest? While Kazama is rough around the edges, his story is certainly intriguing. His route was the one I was most curious about, and I was pleasantly surprised by the depth of his character and his reactions to the events that unfold with Kaoru, the ultimate antagonist of his route. His disgust for Chizuru’s brother puts Chikage in a good light.

Saeki’s character immediately captured my attention in Collar x Malice. He’s a good looking guy, and has been close friends with Hoshino for awhile. Overall, they seem to get along really well—platonically, that is. It quickly became clear that he doesn’t have a route, and I couldn’t help but ask myself, why is a handsome man like Saeki not a love interest? Is it just another one of those games with attractive side characters that we can only dream of dating? Either Otomate wanted to tease their fans, or something darker was simmering beneath the surface. And there was.

Upon unraveling the mystery and Saeki’s true identity, the reason why he isn’t a love interest becomes very clear. Saeki isn’t the carefree, laid-back guy that he masquerades as. His ultimate role in Collar x Malice is a significant one; he was the culprit all along. I found the complexities of Saeki’s character very intriguing, and even though he is the antagonist, I’d be keen to see what chaos would unfold if he had his own route.

Mireille and Lyon embark on a trip to her uncle’s house, her new residence after the untimely death of her late father. The circumstances in Empty Horizons still haunt me to this day. It stands as one of my favorite visual novels because of how much it shook me. I spent the entirety of my play-through hoping that Lyon would return Mireille’s feelings for him. My thoughts were that it was going to end in one of two ways: Lyon would return her feelings before the trip ended, or he wouldn’t. The twist that followed shocked me to the core.

What Lyon does is not reminiscent of a yandere moment; it is the action of a man who has lost his humanity for the sake of a job. It is the epitome of a bittersweet love, because he knew that she loved him and he committed the crime anyways. Of course, although this is technically considered a kinetic novel, you are kindly rewarded with an alternate ending after you finish the game. Lyon’s character is redeemed and players are given the happy ending we desperately craved. I recommend this to anyone who is looking to be surprised, but I warn that it’s not for the faint of heart.

Despite being a handsome bird, Shuu is quite intimidating, and right off the bat something feels off about him. The first hint that he’s up to something is the unusual medication he has in his office. That’s not to mention the mysteries revolving around St. Pigeonation, which include students suspiciously going missing in the infirmary. It’s time to start waving the red flag, especially when we confront the doctor about it and he makes an offhanded remark about it being cool if the protagonist disappeared.

His strange remarks don’t stop there, but the main character doesn’t seem to have a natural sense for danger and quickly forgives his morbid comments. In the finale of his route, Shuu’s ending is macabre. The writer is very descriptive about the gruesome events that take place in the infirmary. Shuu is nonchalant and open about his experiments and the destruction he causes. He shows no remorse for the heinous crimes he’s committed, and if anything, he’s rather proud to proceed with his experimentation. It is no surprise that the heroine is his next target.