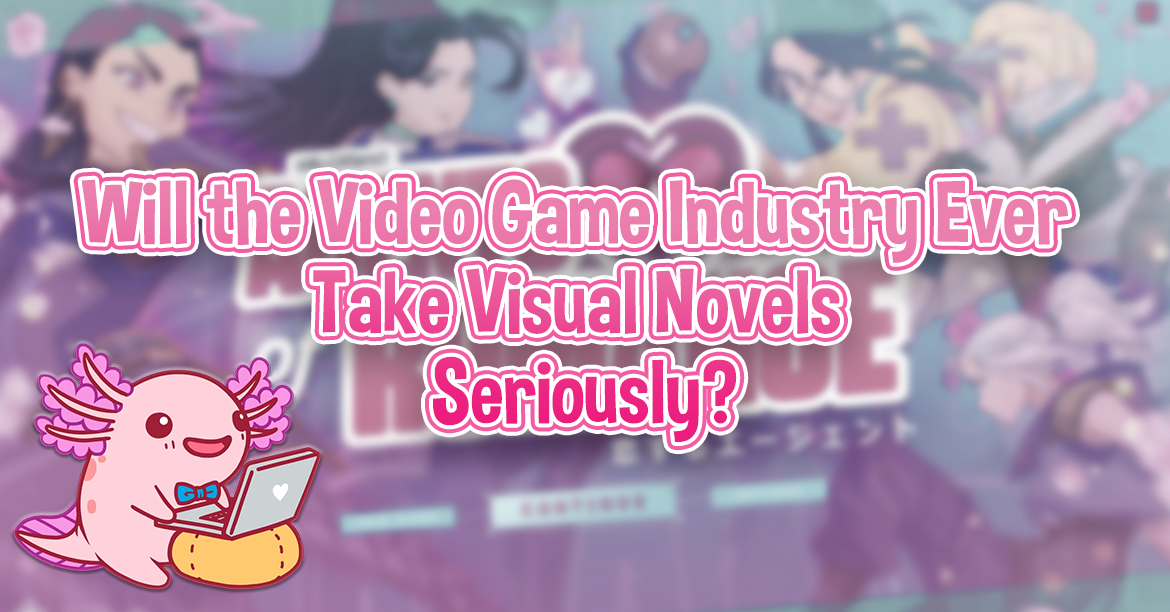 Will the Video Game Industry Ever Take Visual Novels Seriously?

How much longer will visual novels be the butt of jokes, especially on April Fools Day? Will the video game industry ever take the genre seriously?

For the last couple of years, especially this past April Fools’ Day, companies seem to love to post joke projects. I mean, who doesn’t? If I had enough time on my hands, I would have created a super elaborate joke for the holiday. However, I noticed that this year, there was an increasing number of companies who decided to post an April Fools’ “dating sim” or “visual novel” for a popular series of theirs. One that immediately comes to mind is Riot’s VALORANT. This year, the company tweeted about VALORANT: Agents of Romance.

Now, as you may have inferred earlier, I’m not against April Fools’ jokes. For the most part, I think you can do anything on the holiday as long as it doesn’t hurt anyone. However, dating sims or visual novels often seem to be what companies pick as their April Fools’ joke. I can’t say it doesn’t irk me, because it does. I, as well as countless others, spend a lot of time, money, and effort into making great visual novels for people to enjoy. You’d think that at this point in time, with the genre gaining popularity over the years, it would be treated less as a joke. There are great titles like VA-11 Hall-A, Umineko: When They Cry, and Raging Loop—just to name a few—that show how unique this genre is. Truly, there aren’t really any limits to what a visual novel can do.

Yet they’re just often seen as jokes or those weird games where you can get a fictional partner. It’s tiring. Visual novels aren’t “joke games.” Yes, they may not play like Mass Effect or God of War, which are games I love. Yes, some of them have an anime art style. Yes, a lot of them have a dating aspect to it. However, that doesn’t mean they’re just jokes. But with companies putting out content like this, I can’t help but feel they’re just re-enforcing that stigma towards the genre.

Just Make It, You Cowards

Fans, some who are aware that it’s a joke and others who aren’t, see these projects and really want them. Yes, I even want them. There’s a lot of good that can come from these projects if they became a reality. Namely, the good it can bring to the medium.

Last year, Riot Games held the Spirit Bonds for their Spirit Blossoms event in League of Legends. What made this unique from previous events is that it had a story that the player can explore if they so choose. It was essentially a visual novel with dating sim elements that was inside the game’s client. So, while the player waited for a match or two, they could explore lore surrounding the Spirit Blossom festival as well as the world of Runeterra, something fans have been asking for. The player could talk with the various characters involved in the event, such as Ahri, Yasou, Teemo, or Vayne, to name a few. During these conversations, the player could make choices. As you continued to play the game and talk to the characters, you’d grow closer to them. A lot of work went into this event. The narrative lead, Jared Rosen, worked on visual novels too. So, with the combination of an experienced person in the field as well as the talents from the rest of team, a beautiful and entertaining event was born. A majority of fans liked it.

So, with this in mind, imagine if they did more stuff but on a bigger scale.

Both their games, VALORANT and League of Legends, have worlds that are begging to be explored. Worlds that can be told in a narrative format like a visual novel. And if we see companies like Riot making visual novels, do you know what it’ll do for the genre? It’ll make it explode even more. More people will actually check out visual novels. Maybe they’ll read Danganronpa or one of the many Key titles out there. Maybe they’ll like it, maybe they won’t. But I think once they try a visual novel, they’ll see the appeal. I think they’ll start to have a respect for the genre that they wouldn’t have had before if one of their favorite companies didn’t expose them to it. Then, slowly but surely, fewer and fewer people would have that stigma of visual novels being joke games.

If that can happen, then that’ll be amazing. But for right now, until these sort of “announcements” stop, I think that stigma will continue to exist.