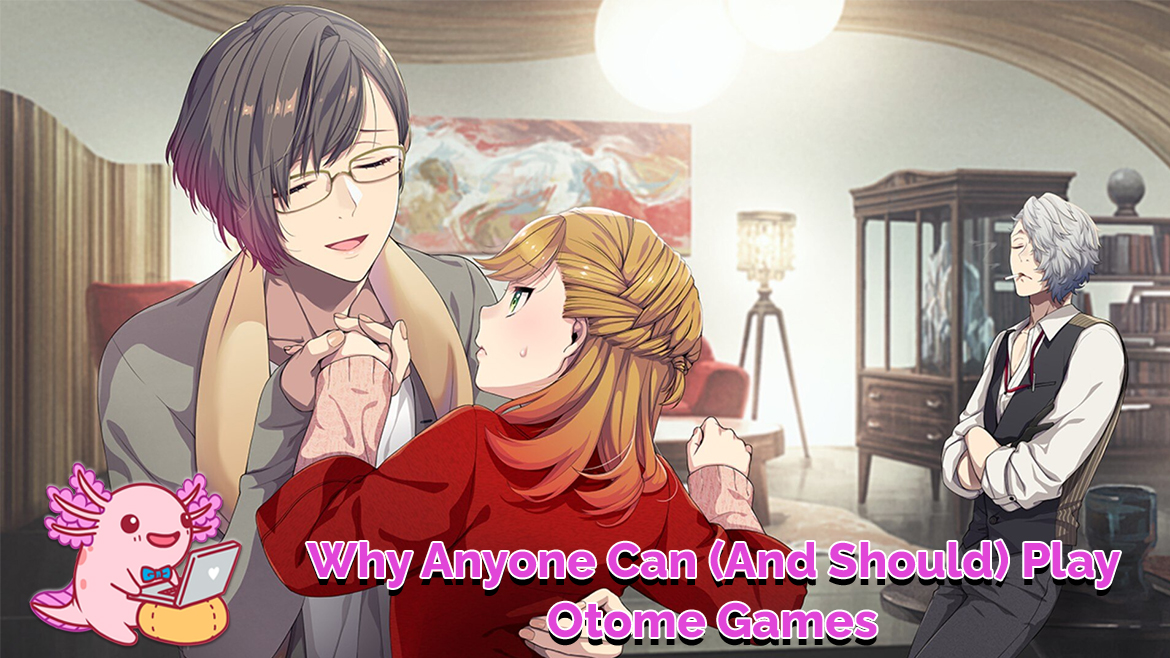 Why Anyone Can (And Should) Play Otome Games

Although the name “otome” (maiden) gives an impression that otome games are made only for women, that’s far from the case. While their approach to visual novels might be different, anyone can (and should) experience the joy of otome games, and here’s why!

While watching Idea Factory International’s Online Summer Festival livestream announcing their newest titles last month, a particular comment came up in the stream chat that really stuck out to me:

This stuck with me, because while the obvious answer is “yes, of course,” the fact that they thought to ask permission to play them reveals some unfortunate attitudes in the gaming community towards otome games, or “games for women,” in the sense that these games are somehow only for female-identifying players, as if their experience as a game is invalidated if anyone other than a woman plays them. While that obviously is not the case, sometimes it requires people to actually say it out loud:

“Yes, you should, and here’s what you should try if you’re curious!”

But that seems simple. Why should everyone play otome games, and what can otome game developers and fans think about while creating their games? Let’s talk a bit about how to make otome games for everyone, because they already are!

First, while the word “otome” translates to “maiden,” the biggest mistake some fans and developers of otome titles make is the assumption that these games are only for women. The more important thing to consider is that otome games are, generally, made by women with female perspectives and desires in mind. This extends beyond the simple assumption that otome games are just “dating sims for women,” because they go far beyond simply just reversing the genders of the main character and pursuable lovers. Instead, it’s probably best to think about the fact that the otome game experience is mostly focused on being from the perspective of a woman, and while, yes, romance is indeed the general focus of the game, how that woman interacts with the world around her is what makes the games shine.

In many cases, this is a perspective sorely lacking in most games (visual novel or otherwise), as many games with female protagonists are generally catered to male audiences. Otome games, catering primarily to women, give fresh and interesting perspectives to character archetypes and storytelling that might normally get ignored or not even be considered by players or developers in their narrative beats. Take, for example, Cardia from Code: Realize ~Guardian of Rebirth~. Her journey from start to finish is a delight to watch, as she goes from being an emotionless woman who doesn’t know much of the world, to being a courageous woman who stands up for her friends while in the face of danger. Her growth of understanding her feelings and learning how to express them will surely warm your heart, kind of like a proud parent watching their kid grow up.

Further, while games generally target a “specific” demographic, that isn’t supposed to mean that only that demographic can, or should, play that title, and reduces the significance of otome games down to their gendered expectations rather than anything unique or interesting they do themselves. This is something of a catch-22 that games have placed on themselves; while initially the title of “otome game” might have been helpful in separating them from male-oriented VNs, it also makes it easier for people to dismiss them as being “for girls,” as if that is innately bad or lacking when compared to other games. Perhaps too large of a problem to solve in a simple article, it should instead go without saying that otome games are more than just games “for girls,” and are instead games “from a woman’s perspective,” which doesn’t exactly roll off the tongue, but helps get past the stereotyping of otome games for sure!

From a developer’s point of view, the benefit of playing games that don’t fall into your wheelhouse should be obvious: it allows you to get more experience with games and media in general, as well as what people looking for diverse gaming experiences want. In the case of otome games, one of the biggest determining factors in their quality tends to be a prime focus on character development. In this sense, otome games go beyond simply being “dating sims for women,” but from a narrative point of view go about telling stories in totally different ways. Even if just for research for future products, the benefits of seeing different perspectives in how games operate and the stories they can tell are invaluable to a developer looking to craft a unique and new experience for their own game, especially as visual novels become more and more popular and players are looking for newer, more interesting games to experience.

But back to the original question: “Can a guy play otome games?”

There are some reasons this question is tricky. The first is the assumption that the asker feels that their gender identity means certain games are, or aren’t, for them. But the reality is that this attitude is common in most forms of media—that things “for women” are either off limits to them, or are otherwise “inferior,” meaning that either way, it isn’t worth the time or “risk” of experiencing them. But that’s a limited and myopic point of view that only harms someone’s ability to enjoy different things and find things that they might have never tried before. But the stigma, for lack of a better term, certainly exists, so it falls to developers and fans to find ways to get players to try these wonderful games without having to rely on “they’re otome games, but” as an argument. So how do we convince curious, or ashamed, players to try them?

One of the biggest strengths otome games have is their shift of gaze from male-dominated to woman-centric or even female-dominated; games in the otome genre often feature women facing and overcoming adversity, rather than placing adversity as an excuse for why women are treated or depicted a certain way. For that reason, when talking about otome games to curious players or even doing media pressers for games, instead of trying to shoehorn in that “anyone” can enjoy the game, simply focus on the things that otome games do different from other games. What sorts of unique experiences will players get for trying these out? What are they missing out on? These are the types of questions and statements to potential players that will really win over new players rather than trying to defend otome games against gender stereotyping. It also matters to think about what games might best approach that person’s tastes or curiosity. Instead of thinking about what other otome games one game is like, think more broadly: what other games, stories, movies, or shows is this game like? Why would it interest that person? This helps in general (as it makes your game’s unique narrative appeal more interesting), but it also helps avoid the same “it’s an otome game, but” trap that fans sometimes find themselves falling into.

Although otome games are made with the female audience in mind, the genre has been established for better or worse by certain boundaries because of that idea. The more correct definition might be that they are made to tell romantic stories that appeal to non-male audiences, and that put women at the forefront of the narrative and worldbuilding focus. To broaden the horizons of players and develop new games in the otome lineage, it matters to consider how to get more and more players to try them out. Soon, hopefully, players won’t just think “Oh, it’s an otome game? That means it’s just romancing guys and flowery images,” but instead thinking about all the wonderfully diverse, unique experiences that players can expect from dipping their toes into a mode of storytelling they aren’t familiar with, and what wonderful games they, in turn, might be inspired to make because of it!