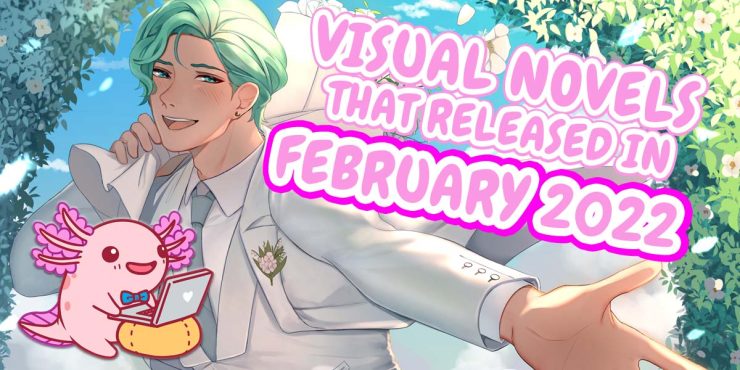 Visual Novels That Released in February 2022

These are some of the visual novels that released in February 2022. You can expect a lot of romance titles!

Every month, we release an article showcasing a selection of the previous month’s visual novel releases. These are freshly released visual novels from February 2022!

Doki Doki Ragnarok is a Viking dating simulator where you date villages. Raiding villages is the equivalent of dating in this quirky romance game, and the goal is to win the heart of the village. Pillage and romance villages, choosing your Viking from an array of characters with skin tone and gender variations.

If you’re looking for a unique dating sim, this historical fiction VN is the perfect game to extend the Valentine’s Day love a little longer.

Our Life: Beginnings and Always is a heartwarming visual novel where you grow from childhood to adulthood alongside the boy next door. Our Life was originally released in 2020, with a handful of DLCs released following the main game, and has received overwhelmingly positive reviews on Steam. The game features a very customizable protagonist, allowing players to set their MC’s name, appearance, personality, and pronouns, making it ideal for an immersive “transition to adulthood” experience.

Released on February 7, 2022, “Cove Wedding Story” is the latest DLC released for Our Life. You must have the main game in order to play the DLC, but don’t worry, because the original game is completely free!

Variable Barricade was originally released in Japan in 2018 and is now available in English for the Nintendo Switch. This otome game features a strong-willed protagonist, Hibari, who is an heiress to a sizable fortune. Her grandfather insists that Hibari get married and sets her up with a cast of suitors. Hibari will stop at nothing to escape marriage, but these four beaus are determined to win her heart.

Aksys released this game in English on February 24, 2022. If you’re looking for a fun romcom with a selection of handsome love interests, this is it!

Saint Spell’s Love Guide to the Magical Student’s Handbook was released on itch.io for Valentine’s Day. Saint Spell’s is a dating simulator about magic and potions and takes place in a magical school. You play as a magic student at Saint Spell Conservatory of Magic. Players can decide their name and pronouns, and can even decide their class schedule and dorm! This game has an impressive amount of lore, and the different houses are reminiscent of Hogwarts.

The pixel art style of Saint Spell’s gives the game its unique charm. Encounter witches, anima, angelic Seraphims, devlilish Fiendish, and Clockhearts at the conservatory. It’s a great title for anyone looking for a fusion of magic and romance as well as a very customizable protagonist.

Heir is a short story with a semi-realistic art style and the spooky backdrop of an old, creaky house. You play from the perspective of an irritable old man, Shimon. The story kicks off with a raging blizzard and a woman who claims to be your nurse. Something sinister is at play behind the scenes, and when Shimon’s estranged grandson suddenly comes knocking, the old man can’t help but feel that the young man wants something more from him.

This is an atmospheric kinetic novel riddled with suspense and intrigue, and is promising for fans craving eerie stories with a surprising twist.