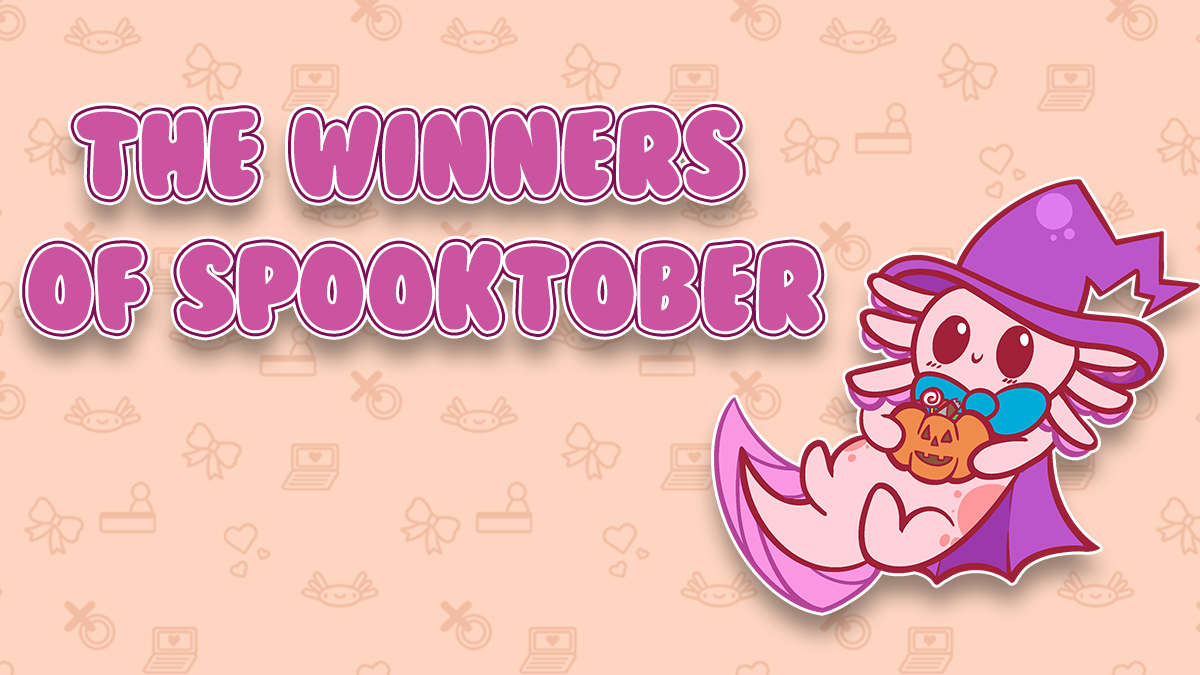 The Winners of Spooktober

Who will be taking home the prize money?

The judges have spent almost the entire month of October playing the overwhelming number of entries, 114 to be exact, to this year’s Spooktober VN Jam. Teams who participated in the competition are anxiously awaiting to see how their game did, and we at VN Game Den are happy to announce the top three winners who will be taking home the large cash prizes. Before we move on to the games that were shortlisted, we have a message from the game jam’s creator and host, Nai.

This was the toughest year by far. We had many amazing submissions, each of us reading 75 or so visual novels to help determine this year’s winners. It was a close race every step of the way, from the shortlisting process to final judging. While only three teams take home prizes, all of you have plenty to be proud of.

First off, we’d like to begin with the games that ended up making the end of the shortlisting phase.

Now onto the projects and teams that have won the top three cash prizes.

“Romancing Flesh is a kinetic visual novel with the style of classic Universal Monster films and the body horror schlock of direct-to-video scary movies!

Through audio recordings,  letters, photos, and film, discover what drove Charles Keating from being a normal college graduate to a mad scientist whose passions drove him to unethical experimentation, self-mutilation, and forbidden love.”

Nai: I remember when I heard the concept of this submission, and my first reaction was “Oh no. Please god, no.” It’s distressing, disturbing, grotesque and morbidly fascinating, and fun. I’d consider myself the most squeamish person on the judging team, but even still I had a lot of fun with it. Romancing Flesh is easily the top submission when it comes to bizarre, visual gross-outs, but also competence with the direction of assets and presentation. Vimi returned to Spooktober VN Jam this year and really delivered.

“Griselda and Dianthus are both students at Stardander School for Witches, but they could not be more different. When Griselda nearly dies during a fae attack and Dianthus retreats into isolation, their lives – and fates – become entwined. Can Griselda bring Dianthus back to the ‘living world?'”

Ari: It feels nostalgic to play this with its stat management system but with the elegance of modern visual novels. The attention to detail is wonderful.

Nai: Take Magical Diary, add a team, sprinkle in two adorable lesbians and you’ve got yourself a VN hybrid called Stardander Revenant. We’re no strangers to hybrids in Spooktober VN Jam, but this is the first time a fandisc-style entry has placed in the top three. The gorgeous character art and the strong character-driven story between the two main characters are what made this submission stand out to us. You have to root for the oafish but kind Griselda. Would absolutely love to see a ‘Stardander Stories’ complication of more like this in the future. Psst. Try talking to some of the enemies!

“Private Investigator Hugo Laurent was ready to busy himself with more paperwork until a young disturbed woman entered his office to request an investigation regarding her grandfather’s safety. What danger awaits underneath the surface of this mystery?”

Ari: Great artwork that is made even better with such a beautiful presentation. Short and sweet, I’d love to see a continuation or sequel.

Nai: Stillwater is a very well-rounded submission that had a strong narrative opening, excellent use of movement and camera techniques to create interesting visuals, beautiful art, and great character chemistry. I’d love to see more of these two in the future. This one hit my soft spot for world-weary detectives and their obnoxious but lovable sidekicks. My guard will have to be up next year.