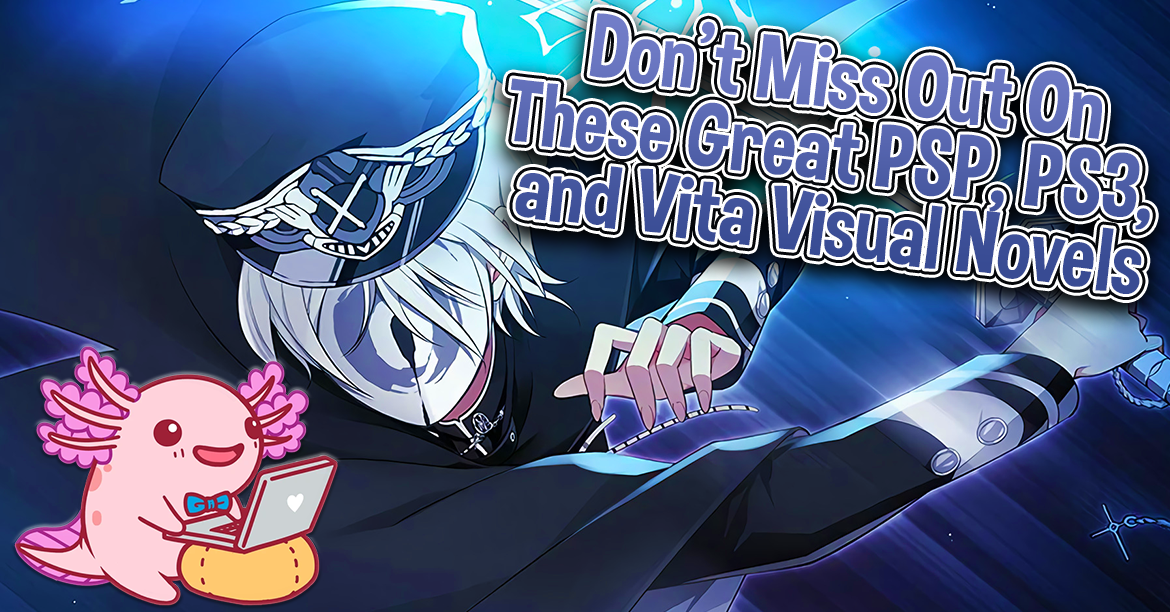 You Don’t Want to Miss Out On These Great PSP, PS3, and Vita Visual Novels

With the now-reverted announcement of the closure of the PlayStation 3 and PlayStation Vita stores, there’s been a lot of attention on those platforms. There are a few visual novels exclusive to them, so I’ll be telling you which games those are and what they’re all about!

Earlier this month, Sony announced that the official online stores for PlayStation Portable, PlayStation 3, and PlayStation Vita were shutting down this summer. However, due to the response from PlayStation fans, the company said that they are going to keep the PlayStation 3 and Vita stores online for the foreseeable future. With that being said, I still think you should pick up these titles—especially the one PSP game on this list, since it may still be made unavailable later this year. So let’s get the show on the road, shall we?

Hakuoki: Stories of the Shinsengumi

Hakuoki: Stories of the Shinsengumi for the PlayStation 3 has the same story as Hakuoki: Demon of the Fleeting Blossom. The biggest thing to note about this release of Hakuoki is that it features the fandisk. Originally exclusive to Japan, Western audiences could now view extra scenes that took place during the main scenario. There are also brand new scenes with each bachelor as well as non-romancable men: Kondo, Nagakura, Sanan, and Yamazaki. At the moment, the bonus content in Hakuoki: Stories of the Shinsengumi is exclusive to that version in English.

Now, if you don’t know what Hakuoki is about or haven’t played one of its many games, allow me to give you the rundown. You play as Chizuru, a young woman who is trying to look for her father. On her search, she bumps into a group of men called the Shinsengumi, an elite police force whose members include twelve beautiful bachelors! However, there’s more to the men than meets the eye. Hakuoki, despite its re-release after re-release, is still considered one of the best otome series out there. If you haven’t gotten around to playing it, like me, then pick up Hakuoki: Stories of Shinsengumi for your PlayStation 3!

In Bad Apple Wars, the protagonist arrives in the afterlife after getting into a fatal car accident. When she awakens, she finds herself at NEVAEH Academy, a school for lost souls like herself. Anyone who follows the school’s rules will be able to graduate and go back to the land of the living. Of course, as is the norm with any game, it’s never that easy. A war breaks out between the the delinquents, called Bad Apples, and the Prefects, who enforce the school’s rules.

I’m always for an otome game that takes a darker direction instead of being cutesy all throughout its playtime. If you’re looking for a game like that with fantastic music, then you should check out Bad Apple Wars. The only thing you should be wary of is the “Soul Touch” scenes. In these scenes, you’re supposed to touch a character in certain areas. It’s a little…questionable for me personally, but they’re very critical to your playthrough. Touch your romantic interest in certain spots and they’ll say something. They also offer a way to connect more emotionally to the boy.

However, Aksys, for whatever reason, didn’t translate these scenes, so unless you know Japanese, you won’t know what the boy is saying. There are translations online, but still, translations should have been in the English game in the first place, especially since they’re important.

Anyway, just keep that in mind if you decide to purchase Bad Apple Wars.

Norn9: Var Commons is an otome game that I’m recommending with caution. I’ll get into that in a second. Norn9: Var Commons starts off with a young boy named Sorata who hears a mysterious song. As he follows the source of the sound, he meets a young girl who tells him to follow her. Suddenly, he’s transported to a mysterious place. This is where he meets the three playable heroines, who each have three boys they can pursue. All the characters eventually board a ship called the Norn, which is traveling to “the World.”

A sci-fi otome game? That sounds pretty good. Throw in 9 routes and you’re pretty much getting a bang for your buck. However, there is one caveat I have, and that is the quality of the English text. What was supposed to be a great game got brought down hard with a wonky translation. There are a ton of errors, mistranslations, and sentences that don’t make a ton of sense. I can forgive a typo or two. However, when you have issues like the ones pictured below, there’s really no excuse.

With that being said, if you are okay with a subpar translation, then you might enjoy Norn9: Var Commons.

Period: Cube ~Shackles of Amadeus~ follows a heroine who is trying to find her missing brother. He happened to be an avid fan of the MMORPG Arcadia, so she decides to look there for clues. After creating her character, she’s sucked into the game. The only way she can leave is if she can survive the harsh world she now finds herself in.

The game is very pretty to look at, and that’s in part due to the great artwork from Black Wolves Saga artist Kuroyuki. Period: Cube ~Shackles of Amadeus~ is a good otome game, and anyone who is a fan of MMORPGs or Sword Art Online will enjoy this title.

Sweet Fuse: At Your Side

In Sweet Fuse: At Your Side, you play as Mega Man co-creator Keiji Inafune’s niece, Saki Inafune, whose first name is changeable. Your uncle decides to open up an amusement park. On its opening day, things go horribly wrong. An evil pig named Count Hogstein shows up and takes over the entire park while keeping you and seven others hostage. You’re told to participate in a week’s worth of deadly games in order to escape. With seven bachelors by your side, will you be able to escape the amusement park alive?

I absolutely loved Sweet Fuse: At Your Side, even if it is a little weird to play as Kenji Inafune’s relative, as your opinion of him may have changed over the years. However, he’s only really there to bring us the setting of the story. The main character, Saki, is fantastic. She was the first otome game protagonist I played as who wasn’t afraid to tell her prospective romance interests to shut up. She’s also very smart, which proves to be a great asset when it comes to solving the numerous puzzles in the park.

As for the men, I liked them all, some more than others. That’s not to say those I didn’t like as much were bad characters. Each character is unique in both design and personality, so there’s a guy that will appeal to your tastes.

Tears to Tiara II: Heir of the Overlord

Tears to Tiara II: Heir of the Overlord is a tactical RPG/visual novel hybrid, much like the Utawarerumono trilogy. If you’re familiar with those games, then you can expect something similar with Tears to Tiara II.

In Tears to Tiara II, you play as the last remaining heir to the Hispania royal family, Hamilcar Barca. However, due to him being in hiding for so long, he isn’t the one sitting on the throne. Rather, it’s the evil Imperial Army who spends every day making the people of Hispania’s lives a living nightmare. Hamilcar can’t do anything but watch as the great land his family built crumbles right before his eyes.

One day, however, a girl named Tarte appears. She claims she’s a goddess and tells him to fight back against the Imperial Army. At first, he ignores her. However, once she gets kidnapped, Hamilcar starts his efforts to take control back from the Imperial Empire.

Despite this game being a sequel, you don’t need any knowledge of the previous game in order to enjoy this one. If you enjoy tactical RPGs, then you’ll like Tears to Tiara II: Heir of the Overlord.