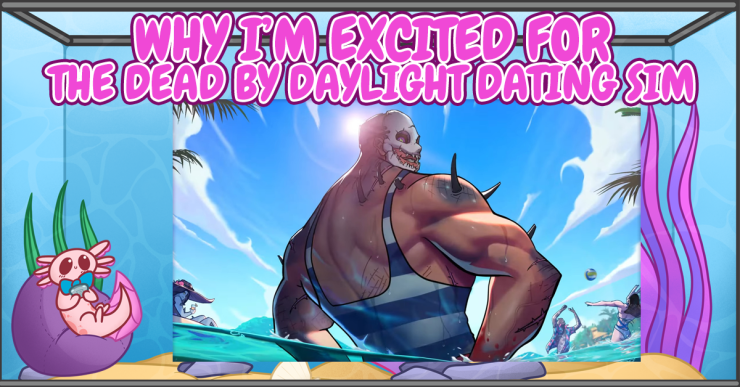 Why I’m Excited for the “Dead by Daylight” Dating Sim

There’s going to be a Dead by Daylight dating sim and it looks promising!

The Dead by Daylight game developers surprised the world this past May by announcing their upcoming dating sim Hooked on You, which will be developed by Psyop, the same creators of I Love You, Colonel Sanders!. Hooked on You includes some of the characters in Dead by Daylight, but the story takes a different turn. Rather than repairing generators and getting chased around a spooky map, you’re welcomed with tropical waves and warm sunshine in this beach-themed romance game. But beware, danger still lurks, and the overarching goal is to romance the killers—or else.

Unravel these mysteries and find out what makes each character tick as you flirt, banter, and woo your way into their hearts in this darkly comedic adventure. But choose your words wisely. These Killers are passionate and powerful in equal measure, and this seductive dream can become a nightmare quicker than you think.

The lovable killers include the Trapper, the Huntress, the Wraith, and the Spirit (who happens to look adorable, by the way). All of them look deceptively inviting, a hilarious and possibly terrifying contrast to the theme of the original game. I’m dying to know how the story ends for each of these characters whether you manage to romance them successfully or not. What’s great about this game is that it gives fans a chance to unravel more about these beloved killers and see them in an entirely new setting. I’m particularly keen to explore the Wraith’s story because I love the way his character art was designed.

Prove yourself to your paramour by mastering a series of flirtatious minigames to advance the plot.

Hooked on You will be a choice-based visual novel with minigames, and I think fans will expect a lot from the minigames featured in a Dead by Daylight-inspired game. The “flirtatious minigames” mentioned on the Steam page are something that have piqued my interest the most; I was pleasantly surprised by the amount of interactive elements the developers plan to include. There’s something dark yet comedic about slicing meat in a killer dating sim and I expect the game to make me laugh just as much as it gives me the spooks.

Based on the featured screenshots, it looks like some survivors will also be available in the game. The screenshot above appears to showcase Dwight and Claudette, and I assume that players will be able to choose one of them as the protagonist, although it remains unclear if that’s how the game will proceed. Either way, I’m equally as excited to see the survivors in a new atmosphere, because even though they don’t have any dialogue in Dead by Daylight (aside from agonizing screams and grunts), these two have a lot of personality, evident in their body language, skill sets, and character backstories. Dwight is a nervous wreck who somehow manages to boost the morale of those around him. Claudette is a healer, particularly empathetic and in tune with those around her. It would be ironic but very entertaining for these two to romance one of the killers.

The game has beautiful artwork, a compelling plot, and great character designs that set the game up for success. Hooked on You checks all the right boxes and has managed to create a premise that draws me in. The concept holds a lot of potential—not just because the cast is full of already-famous characters, but because the story is a dating sim with a dark twist. Will the player get kissed or killed?