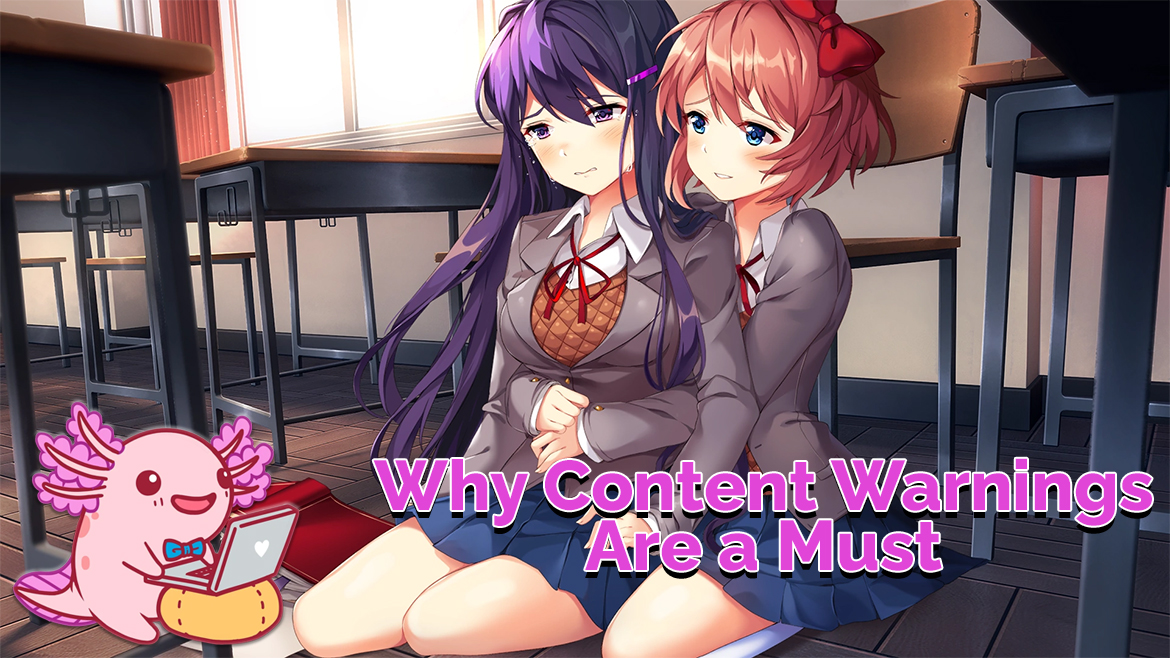 With gaming being more popular than it’s ever been, there are lots of folks getting into this wonderful hobby. And as gaming continues to grow and evolve, shouldn’t it make more sense to have content warnings so everyone knows what they’re in for?

Content Warnings are a hotly contested idea when it comes to media, especially games. The idea that players should always go in blind and be surprised by games seems to come from the notion that games are exclusive, difficult, and hard to get into; however, this attitude is possibly even more backwards when it comes to visual novels, games that require heavy personal investment on the part of a reader. But why does it have to be that way? Instead, it might be better to consider that the future of visual novels, and their ability to hit even wider success, is in removing these barriers to access:

Content warnings are a must if visual novels want to evolve.

In 1998, Resident Evil 2 released on the PlayStation, accompanied by something most players had never seen before: A content warning. As the game loaded up, players would see the following: “This game contains scenes of explicit violence and gore.” And that was it. A few seconds, a static screen, and players knew what was possibly waiting for them around the corner. This screen was so much a part of the Resident Evil experience that it started to appear in all other games, and even re-appeared in the Resident Evil 2 remake. Many players would probably not even bat an eye at the screen, but that’s the point: content warnings take almost no time, and help people without bothering anyone else. Players who were unable to, or did not want to, play because of that could simply choose not to, and players who would find that content disagreeable could simply be prepared to know what was coming.

Like many accessibility options, content warnings give players choices and control over what to expect. They don’t change the content and they don’t affect the gameplay experience; instead they let players know what could happen and when it does, know that it was something they were prepared for. While visually gory violence became a staple of most AAA games, visual novels have always been a little different in terms of how they deliver content. Since players are required to read and parse things as they would a print text, the description of violence and disturbing content can sometimes be even more shocking and effective than body parts flying off of Mortal Kombat characters; when you have to imagine it, it becomes a lot more personal.

Content warnings, as odd as it sounds, are a way for VNs to work to escape that stigma. If a game comes with a list of what to expect, and how to expect it, players will start to be more informed on what to expect and how, and will start to see the ways in which visual novels have amazing breadth and depth in the content that is available to players. Even games without objectionable material benefit from content warnings, and games that are challenging or even controversial can get more players through the information content warnings provide.

One particular game comes to mind in this regard: Doki Doki Literature Club!.

From Personal Experience to Regret

Ah, yes, who could ever forget playing the experience that is Doki Doki Literature Club!? A game with a sweet romantic appearance with interesting characters that steal your heart, yet it hides something terribly sinister? Not me. I’ll never forget my time with Doki Doki Literature Club!, but if you’re thinking that this means that my time was a pleasant one, it sure wasn’t. At the time, a couple of friends had told me that I’d love it, that the game would be an amazing experience, and that I should stream myself playing it. They also added that because I enjoyed games like Higurashi: When They Cry and Umineko: When They Cry, I’d absolutely adore DDLC. Alright, that’s some high praise, so I’m curious and intrigued to try out the game. Knowing nothing else about it at the time, and trusting what my friends suggested, I fired it up and, yes, I even decided to stream my progress as well.

Barely hours in, I closed the game, ended my stream, and realized that my “friends” had simply wanted to see my reaction to the horrific shock content in the game; they never cared about how I might react or what I might think about the game, and when I gave up on the game, they slinked off. Some friends, huh? It took me a long time to recover from that, and I never did finish DDLC. But what I did realize is that, if visual novels want to reach even bigger audiences and become even more accessible, they need content warnings. And definitely not the attempt at content warnings that DDLC has, which didn’t bother listing the extent of the horrible things that the game contained. Even with the newest release of the game for consoles, Doki Doki Literature Club Plus!, the update to the content warnings feels more like an afterthought rather than something to help the game be more accessible.

On the Team Salvato blog, one of the remake’s developers mentions DDLC Plus having a similar content warning system as another game, Ikenfell. The system, if you choose to enable it, will have a text box pop up in the middle of the screen before a particularly disturbing scene is about to occur with a very short warning. Almost too short of a warning. And if you click past it as you’re rushing through text, once it’s gone, it won’t even be visible in your text history. See, in Ikenfell, the warning is more descriptive, so the player knows what they were getting into, which is why its content warning system is so heavily praised. And that’s what DDLC Plus needed. And, dare I say, it’s what every game dealing with heavy themes needs.

Better content warnings would have prepared me for DDLC by giving me the knowledge of what to expect. I wonder what could have been if someone had just told me, rather than make the “shock and awe” of the game part of the supposed charm. And I wonder what Team Salvato thinks, as most interviews they do sell this emotional jumpscare as part of the game—what would people think of DDLC if they could just know ahead of time what to expect? Would the game even be as notorious? Or would it just be another game? Either way, I know that content warnings would have changed a lot of things, but the most valuable thing is that I would have been able to play and enjoy the game, and possibly even recommend it to others.

While other forms of accessibility may seem more directly important, content warnings serve a different type of accessibility. There are more folks than ever playing video games, all with different experiences and outlooks in life. Limiting the scope in which people can experience in a safe way is not the move to make, especially with a niche genre like visual novels. As visual novels straddle the line between game and prose, between interactive game and active reading experience, there’s perhaps even more of a reason to have these content warnings available to help readers know what to expect, and to get even more players into the wonderful world of visual novels. Content warnings are something that can only help the visual novel community grow, and to help continue bringing in new voices, new players, and new fans to the wonderful and exciting world that only visual novels can provide.