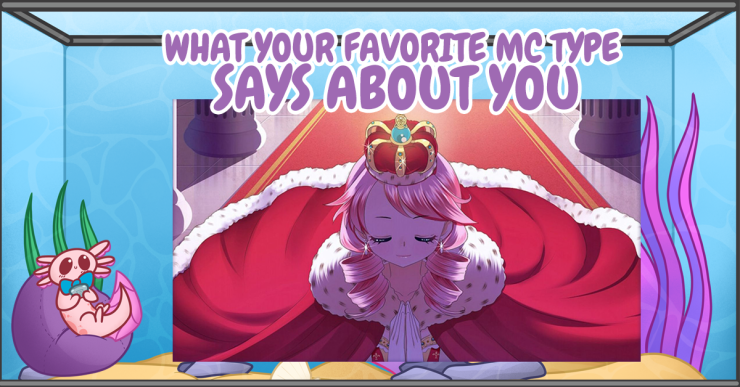 What Your Favorite MC Type Says About You

What does your MC choice reveal about your personality?

There are so many different breeds of main characters across visual novels, and some are more relatable than others. What kind of main character do you relate to the most, and what does that reveal about your personality?

You like adventure in life, but you want someone else to take the reins and surprise you. You are the kind of person that goes with the flow and finds excitement in the unknown. Playing the faceless MC is your way of becoming one with the story. You might not even use your real name when it’s a game that lets you choose your own, and more often than not you enter your D&D character’s name. You’re a chameleon when it comes to games and stories, because it’s more fun to shed your real-life persona and dive into the story as someone else.

The independent fiery protagonist is usually a hothead, but they’re good at getting things done and not letting anyone push them around. You’re not afraid to speak your mind to the rest of the characters if the choice is given. You don’t flinch when it comes to choices, and sometimes you actually select your choice without even giving the rest of the options a read-through. Bad ends don’t scare you, and you might even find them amusing. You know who you are and what you want in life, and that shows when you play games.

This type of MC usually has blue hair, a tendency to be apathetic towards their day-to-day life, and very few goals or aspirations. You relate to this main character because that’s exactly how you are in life. You’re that cool, aloof character at your school or work that everyone secretly adores. Think Okazaki from Clannad. This is the MC you gravitate towards in visual novels because you’re also bored, and you want to see the story unfold around you. You are the protagonist in real life, and it’s up to the side characters to bring on the change.

We’ve all seen the main characters that are rather timid in nature. They let the other characters push them around and tell them what is and what isn’t. You play this kind of character in visual novel because you don’t like to make decisions. In fact, you’re terrified of choosing the bad ending. So much so that you hope that the side characters will give you enough hints so you don’t accidentally end up facing death. You’re the kind of player that gets stuck on the choices and eventually looks online for a guide.

You’re supposed to be a royal king, queen, or titled figure in real life, but for some reason you weren’t the chosen one. Well, you should be, so you correct that error by selecting the appropriate title in your games. You’re excellent at stat management games and could easily run your own empire if given the chance. You feel you’ve been born into the wrong era when it comes to real life, so medieval or period piece visual novels usually appeal to you. These games feel nostalgic of your past life as an imperial monarch.