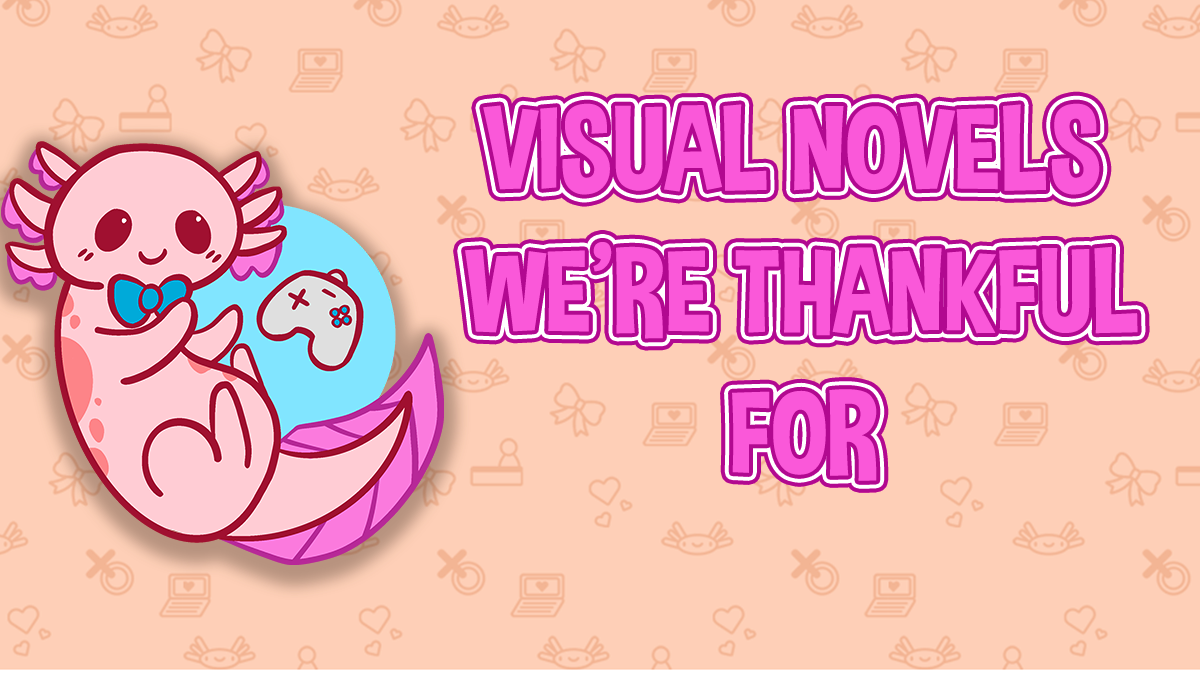 It’s that time of year we come together and say what we’re thankful for. Since our site is dedicated to visual novels, we thought it would be best to talk about what VNs we’re grateful for.

With Thanksgiving right around the corner, we thought it would be a good idea for the VN Game Den team to get together again and make another collaborative post similar to what we did for Spooktober. The writers at VN Game Den are developers, while the ones behind the scenes also create visual novels, or have helped do some work in the medium as proofreaders, editors, etc. So it’s safe to say that visual novels hold a special place in our hearts. Today, we wanted to highlight the visual novels that mean something to us, whether they’re our first visual novel, the visual novel that fuels our inspiration to keep creating, or one that helped us get through a tough time in our lives. Whatever the case may be, we wanted to thank these visual novels and the teams behind them for what they’ve created.

I have to show some love to the very first visual novel I ever played, Always Remember Me, an otome dating sim. This game introduced me to the world of visual novels, which is now a huge part of my life, so I am beyond grateful. I played this while I was going through a rough time, and this game really got me through it and showed me that there are these cool things in the world called visual novels, and they make life a little bit sweeter.

fault – milestone one is a visual novel that has inspired me on so many levels, so as a developer I’m incredibly thankful for it. The well-crafted world lore, gorgeous art, enchanting soundtrack, and the use of the 3D camera for a more cinematic storytelling experience all really captivated me. fault – milestone one transported me to another world the second I started playing it, and I can only hope to make a visual novel just as magical one day.

Code: Realize is my absolute favorite otome visual novel of all time. I always thought that the introduction of an MC who couldn’t be physically touched added a meaningful layer to Cardia’s character, which lets players explore the idea of falling in love in a way that may not be expressed in other romantic VNs of similar genres. Also, because Lupin’s route is locked until you complete every other character route, it was the first time I ever 100% completed a VN with multiple routes. Normally I skip around to whichever route I’m interested in most, but this structure allowed me to pursue characters I definitely wouldn’t have otherwise.

PS: Lupin is best boy. Don’t let any other review tell you otherwise! 😉

I love Aloners because it holds a very nostalgic place in my heart. I played it when I was first discovering what the visual novel genre, particularly indie VNs, was all about. This was before I even really decided I wanted to develop VNs myself! Aside from the nostalgia, I assure you that I’m not looking at the game with rose-colored glasses. It’s a gritty story that allows for the player to shape their own personality. The fact that, even years later, my experience playing still sticks with me says a lot. Aloners has a lot of heart, and I definitely recommend people play it if they have the time!

After years of subsisting on Flash dating sims and whatever random thing I could hijack in fan-translated English, Hakuoki on the PSP was one of the first times I was able to acquire an actual visual novel, properly localized and everything. And while it wouldn’t necessarily break my top ten games now, it introduced me more firmly to the medium, and showed me how smooth and fun a fully realized visual novel could be.

Anyone who’s known me for any length of time knows how much I utterly adore this game. The absurdity and humor and just utter weirdness combined with a genuinely good story makes this game one of my favorites to this day. Working on a voice-acted fandub for the game was also one of the funnest projects I’ve ever worked on. That same fandub would also be an important step in my professional voice acting career and my work as an indie game developer.

This was one of the first games I really remember hooking me as part of the early wave of high-quality English-language visual novels. Not only was it just a good game, it was one of the first I ever played that allowed for not only multiple genders of love interest, but the ability to customize my main character. This would instill the same sense of narrative control I found in RPGs. The early navigation of multi-identity narratives would end up being the trait I most sought in later games.

If you’re a friend of mine or follow me on Twitter, you’ll know I’m a gigantic fan of 428: Shibuya Scramble. I love the game so much that I even got a tattoo of my favorite character, Tama! What I think this game shows is that even with an incredibly wacky premise with even crazier characters, you can still create an emotional story that you can’t help but get invested in. There’s a lot packed into this game, such as being able to tell the game’s story from six different perspectives. Very rarely do I see a game that’s able to masterfully tell its story while managing to tell it from different perspectives. It’s a stellar example of great storytelling.

Lastly, this game came at a time where I needed it the most. I was going through one of the roughest patches in my life, leaving a toxic friendship but still trying to process what exactly happened with this person who I thought was a good friend. When I sat down and streamed this game, I was able to genuinely laugh and smile, forget about the negativity in my life and just have fun with my viewers, some of them who weren’t even visual novel fans. As a result, this game holds a special place in my heart.

I mentioned this title at length in my Switch games article earlier this year. Gnosia is an incredibly engaging visual novel with an eye-catching, vibrant art style. The cast is a bunch of misfits, to say the least, all with intriguing backstories to them which you are required to find out if you want to finish the game. From a mute, menacing little girl who can turn anyone against you, to a talking, happy-go-lucky beluga whale, this game really has it all. Much like 428: Shibuya Scramble, there’s a lot more to these characters than just their quirks.

The phrase “Ad astra per aspera” is seen throughout the game, and I think it perfectly encapsulates the journey the entire cast, including the player, goes on.  Although you may experience a lot of turmoil, especially when you have to betray your own teammates, you’ll eventually reach the end you and the others have been fighting so hard for.

I just got into Code: Realize this past summer where I binge played all three visual novels on the Nintendo Switch. I’d heard how good it was, and clearly needed to find out for myself! Code: Realize quickly became my favorite visual novel because of how intriguing the story was, and how much I loved all the characters. Each character is woven together with an intertwining backstory and wrapped up in wonderful character design. The multiple different paths have different endings, giving me a lot of replayability and desire to really see what the good and bad ends were for each fella. That being said, Van Helsing is the best.

the head well lost, currently in development by L3, is a visual novel I’ve been looking forward to since I played the demo about a year ago. It’s dubbed “Dullahan Dating Sim” because it’s about dating a mythological creature from folklore called a dullahan, who you meet through a dating app. It has a nice modern feel to it, from the art style choice to the chatting phone text box between the main protagonist Francis and Rai the dullahan. Upon playing the demo, I was immediately drawn into Francis’ world and knew I’d want to read more about her life and dating Rai. I realized through playing this demo, the chatting phone UI is something I just adore and would love to see in more visual novels where applicable.

Dandelion – Wishes brought to you –

Dandelion -Wishes brought to you – is one of my favorite dating sims. It was developed by Cheritz in 2012 and has held a special place in my heart. This game has several paths and stories to pursue, which makes it hard to decide which character to go after. It also has an early example of a diegetic UI (notebook page UI) which is a personal favorite for me in games. I recently re-played it and the game really holds up, and I fell in love with all the characters again!

Hustle Cat by Date Nighto is another all-time favorite of mine. This game was one of my first experiences with a not-super-traditional visual novel and started inspiring my interest in visual novel development. This game has a unique and very distinctive aesthetic that really suits the story. The plot is incredibly heartwarming. Every time I started a new path to try and collect all the CGs and achievements, I would find myself in love with each of the characters! It also seems that I have a bias towards games with cute people turning into animals. Who knew?

The Letter is the visual novel that is responsible for me creating both VN Game Den & Snowhaven Studios, so of course I’m extremely thankful for it. Even after playing so many visual novels since then I’m still inspired by this game (and Yangyang in general) the most. The Letter’s art, storytelling, and voice acting still stand unrivaled in my mind, and I hope to one day produce something that achieves that same standard.

Heart of the Woods

Heart of the Woods is another visual novel that truly inspired me thanks to its wonderful art, story, and soundtrack. While The Letter is responsible for my start in visual novels, Heart of the Woods is largely responsible for my focus. The seemingly ordinary bittersweet start of the story focusing on two friends going through a change in their relationship and the way that it transitions into an incredible world filled with secret magic truly pulls me in every time that I play it. I also now know that I have a serious weak spot for cute yuri stories that involve snowy scenes.