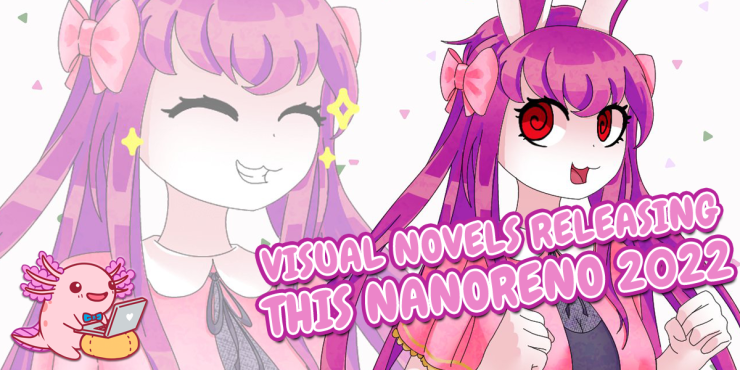 NaNoRenO is a visual novel jam that takes place every March. Teams and solo devs work to complete all aspects of production in just one month. This year’s jam holds a lot of promising titles, and these are a few we think stand out.

A BL/yaoi mystery visual novel that follows a man named Sebastian as he’s forced into a game of life-or-death, alongside three strangers. Who put him there, and more importantly… who can he trust?

Two and a Half Studios

This BL visual novel is currently in development by Two and a Half Studios, the creators of Amelie.

The most notable feature of this game is the combination of romance and comedy weaved into a plot with much darker themes. The juxtaposition of these strikingly different genres is compelling in itself. When done right, dark plots peppered with romance and comedic moments to lighten the tension are a surefire way to extract a powerful reaction from the readers. The character art for start;again is another strong indicator that this game is going to be on the list of favorites.

You can wishlist the game on Steam as well as follow the itch.io page. The game is a commercial project that will be listed for $4.99 USD.

At least, Aq wants that, and more.

As a slightly less edgy cat girl at 17, you hang out with your friends and crush on a rabbit.

Sweetly Sweetened Sweets is a yuri visual novel about a cat girl and a rabbit girl and is a slice-of-life story with point-and-click elements. The demo for this title will be releasing for NaNoRenO 2022.

A lot of progress updates have been made for this game starting in early March. The things which stand out about this title are not only the gorgeous artwork and cute story, but the art design and GUI composition, showcased in the various progress videos. The start screen contains parallax effects and the point-and-click elements are impressive for a NaNo project. You can follow the project’s itch.io page for more details.

An official synopsis of Gidget & The Mysterious Thievery of Hoppity Town has yet to be released, but based on the breadcrumbs of information and progress posts on Twitter, this visual novel is one-of-a-kind. The main character is a frog named Gidget, a rookie detective with a mystery to solve.

It seems that Fable Novel is a newly emerging studio, but it’s clear that the developers behind the project are far from newbies. The artwork is vibrant, bubbly, and bright, and overall, the character designs really pop. As far as the story, a frog detective and a mysterious crime in Hoppity Town is the setup for a promising visual novel.

A Voice from the Sea

A Voice from the Sea is a fantasy otome game that follows the story of the MC and her encounter with a mysterious man at shore. The project is under the lead of Crysil, best known for their work as the director for the popular visual novel Deliver Us from Evil.

The synopsis and title suggest that the story might have similarities to the The Little Mermaid, and if that’s the case, I’m keen to see this story told with genders reversed. Very little has been revealed about the plot and development of the game so far, but the core artwork and synopsis give me hope for the full game’s potential. The developer has stated that the game’s title is subject to change, and it’s worth mentioning that the title itself is strikingly similar to Voices from the Sea, a visual novel with a comparable theme.

A Voice from the Sea Crysil Fable Novel Gidget & The Mysterious Thievery of Hoppity Town MintGlow NaNoRenO 2022 start;again Sweetly Sweetened Sweets Two and a Half Studios