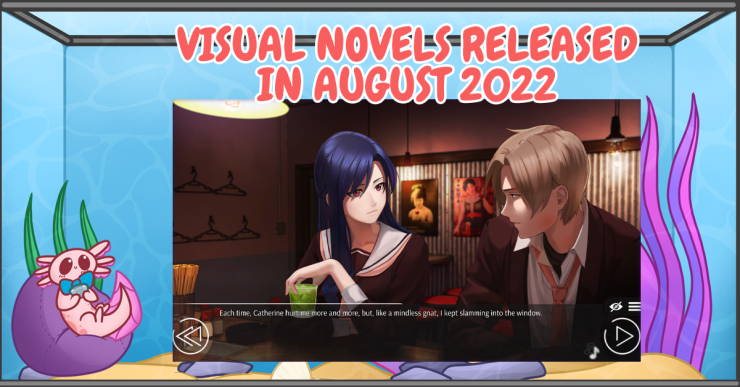 These visual novels just released, and all of them are already receiving positive reviews!

These are some of the visual novels released this August, and each of them have something unique about them. It’s no surprise that these games are already receiving a thumbs up from players!

I Was a Teenage Exocolonist

The cover art for I Was a Teenage Exocolonist looks like the front cover of a bestselling YA sci-fi novel that eventually makes it to theaters. I’m really excited for this one just based on the art alone, but the premise is even more enticing. The gameplay itself offers a combo of visual novel, card game, and RPG-style mechanics.

PRINCE Everett has been sickly ever since he was young. Out of fear for his life, his parents, the King and Queen, forced him to stay in his room. On the night of the biggest seasonal event, he is laying in bed wishing to dance the night away like others in his class.

The Midnight Dance is a boys love visual novel set in the Victorian era. The story is accompanied by breathtaking and serene background art that perfectly depicts the romantic atmosphere. This short game takes just under an hour to complete, but it’s perfect for those scouting for their next historical romance story.

Love, Money, Rock’n’Roll: the romanticism of the Eighties, mystery and intrigues, betrayal and sacrifice, hatred and passion.

Love, Money, Rock’n’Roll is a music-themed visual novel; the key aspect of this game is that it takes place in the 80s in Japan. The game includes fully animated sprites and backgrounds, over five hours of music, and a plot that dives deep beneath the surface as the main character faces adversities against powerful individuals.

Explore the world of Royal Duality with a mysterious and cryptic narrator. Make choices that will change the lives of the characters of the tale, and the world they live in.

The plot in Royal Duality is compelling and highly imaginative. Fae Kingdoms, a Guardian of Stories, and a compendium that unveils the truth of it all—I’m sold. This game page has probably one of the best-written synopses I’ve come across, because it creates enough mystery to leave me wanting to know more.

The Witch of the Ihanashi

The story follows a boy who moves to Okinawa only to discover that his grandfather has disappeared. The boy then meets a witch girl who wields otherworldly magic, and the two enter into an adventure of a lifetime, rich with Ryukyu culture and island life.

The Witch of Ihanashi was released in Japanese in August 2022 and is currently not available in English. The premise is very compelling, so we can only hope that a translation is on the way.

Frail Hearts: Versicorae Domlion is an old-school JRPG with a deep and mysterious storyline placed in a fictional dark city of Gris. Explore the story of four troubled souls and kill the abominations that threaten the existence of reality itself.

Frail Hearts is a dark fantasy visual novel where players will encounter turn-based battles with dangerous monsters. I’m intrigued by the character dynamic of your in-game party: a nun, a gangster, a bookworm, and a scholar. That’s an unlikely group of people to form a group, so I’m curious to see how the story plays out.