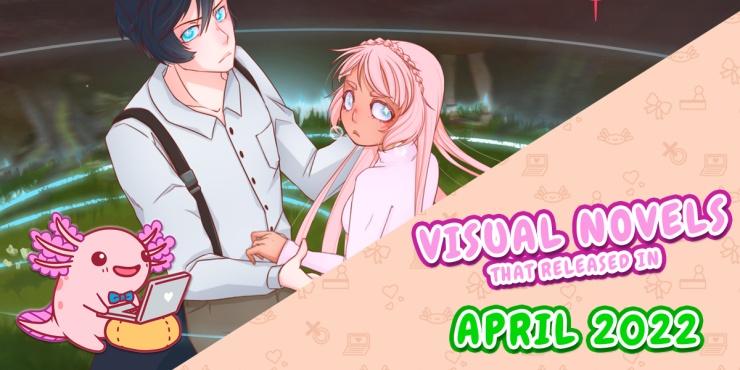 This article is part of a monthly series where we promote visual novels that were newly released. Last month there was a variety of new visual novel releases. Here’s a breakdown of the new games that caught our attention.

Two lookouts meet in a desert, far from the sight of their gangs.

With more in common than they could’ve expected, they scout out a town with rumours of gold.

What will become of this fateful meeting?

Lookouts is a gay western visual novel with a distinct and creative art style. The original version of this visual novel was submitted to the Gay Western Jam and one of the prominent aspects of this game is that it features trans characters. If you’re looking for a unique story about western outlaws, Lookouts is the game to play.

My Path brings you the story of a world facing a crisis!

You will play as a young and skilled researcher called Anna, who has to decide how she is going to help in the fight against a mysterious disease that claimed countless victims and left others in a confused and violent state.

My Path is an otome visual novel that captured my attention when I saw the initial development posts. The game’s art reveals a sunshiny charm despite the story being inspired by real-life current events. The characters are all very appealing both in writing and design, so I look forward to see how their stories unfold.

Suhoshin is a 2D Visual Novel set in the medieval Joseon period of Korea. While investigating a series of mysterious murders, you will have to make choices that will lead you down different paths toward different endings.

Suhoshin is a period piece visual novel that explores medieval Korean culture. The story follows the male protagonist Yuri as he unravels the mystery behind village murders. I love how flawless the sprites in this game are and I have hopes that the story is up to par.

“Curtain Call” is a visual novel about (literally) breaking through social masks by forming meaningful connections with incredibly deep personalities. Whether you’re looking to make new friends or something more, there’s a whole cast of characters just dying to meet you!

Curtain Call is a visual novel about finding your place in society as the game explores the struggles that come with modern social expectations. Life isn’t easy, and I think Curtain Call is exactly the kind of game that acknowledges that issue and seeks to find a fun way to help change that for people.

A lesbian gothic romance tale set in Victorian England, in which an anxious governess is aggressively pursued by her unruly, tempestuous pupil.

Salome’s Kiss released on April 26th and is the latest visual novel by ebi-hime. In my opinion, this yuri romance showcases some of the best artwork found in this developer’s games so far. I love historical romances, especially the Victorian era, so I can’t wait to pick this game up.

A scarred kingdom, a mourning god and an unfulfilled promise made with the past. Uzu and Zuhaar, two continents ravaged by a cosmic event are the setting of The Scorchfarer. The story follows Mikaela and Yukiharu, a Terramagi team tasked with healing their world and unraveling its secrets.

The Scorchfarer is a post-apocalyptic visual novel released in episodic increments. The story is rich with fantasy and intergalactic lore. I adore the artwork for this game, especially Yuki and Mikaela because they’re such lovable characters. If you’re looking to satisfy your science fantasy craving, then I suggest The Scorchfarer.