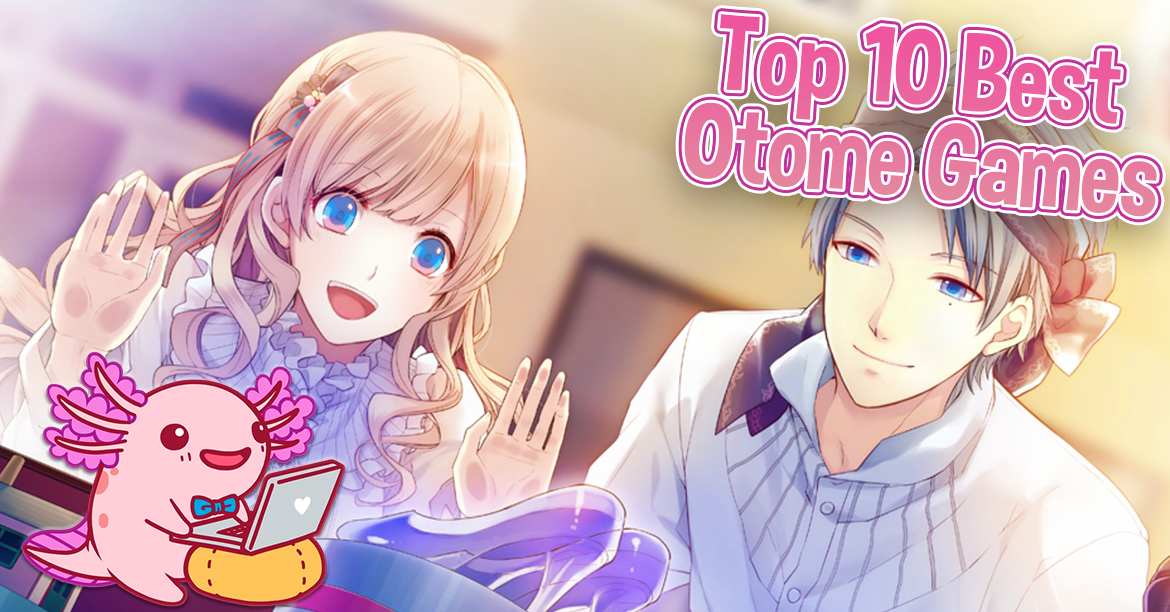 With otome games rising in popularity and the Otome Jam going on, it’s time to give a shout-out to some of the genre’s best games.

I’ve always loved otome games, especially as of late. So many creators, from big companies like Otomate to little indie developers, are pushing out wonderful titles. Taking that and the fact that Otome Jam is going on right now, I figured it’d be fitting if I created a post for some of the best otome games out there.

Note: As always, this list isn’t in any particular order, so just because a game is at number ten doesn’t mean it isn’t as good as the game at number one.

TAISHO x ALICE went through quite the adventure when it came to getting an English translation. Originally, the first game in the trilogy came out in 2017. That version featured a sub-par translation with menus that weren’t even translated. If you experienced the game through that version, then you didn’t play TAISHO x ALICE at its best.

The first game was re-translated by Molly Lee with the help of JAST USA in 2019. It features a better-quality translation and menus that are actually translated! Now, with all three episodes released, you can enjoy the full story of TAISHO x ALICE.

TAISHO x ALICE follows a girl who wakes up in a world filled with darkness. As she stumbles through this mysterious world with no recollection of who she is or how she got there, she meets a boy named Alice. Much like our heroine, he also doesn’t have any memories. The two of them travel to the Looking-Glass World, a fairy-tale-like place that you can’t help but feel a sense of familiarity with. You meet familiar characters you’ve seen in popular fairy tales such as Cinderella and Red Riding Hood. Be careful, though. While the world you find yourself in seems mystical and wonderful, one wrong move can send you down to your unhappily ever after.

I’m a fan of absurdity, so the fact that you can date only birds in Hatoful Boyfriend immediately attracted me to it. Even now, six years after its English release, I hold this game near and dear to my heart. It was the first example I saw that showed that games with weird concepts could become popular and successful.

If you don’t know what Hatoful Boyfriend is about, allow me to tell you. The game is set in an alternative universe where most of humanity has been wiped out and birds have taken their place. You play as the last remaining human on Earth, a young female attending St. PigeoNation’s Institute. She’s a cheerful hunter-gatherer who lives in a nearby cave. You live your life day by day, interacting and getting close to one of the game’s eight romance options. While the game follows typical tropes with each character, such as the best friend who is too scared to confess his feelings or the school doctor shrouded in mystery, there’s more to the game than just the romance element.

Hatoful Boyfriend is a charming yet heartbreaking visual novel that kept me entertained through all 25 hours I put into it. I have no doubt you’ll like it as well.

With so many games in the series, it can be confusing on where to start. Personally, I believe you should begin with Hakuoki: Kyoto Winds.

Hakuoki: Kyoto Winds is the first part of two in the newly released version of the original game. The reason for this isn’t due to money reasons, but because the game was remade with the Vita in mind. Due to the memory limit of the Vita, fitting the entire original game plus extra content just wasn’t possible. So Otomate split the game into two parts! The games, Kyoto Winds and Edo Blossoms, are now relatively cheap on Steam, $9.99 per part, so it’s honestly not a huge issue.

Now, what is Hakuoki about? You play as Chizuru, a young woman who is trying to look for her father. On her search, she meets an elite group of samurai known as as the Shinsengumi, a police force who protects Kyoto. However, there’s more to the group than meets the eye. All of them are hiding a dark secret, and you may find what those are if you choose to romance them. Hakuoki is an action-packed, wonderfully dramatic otome game that’ll keep you wanting more.

My bias for detectives aside, London Detective Mysteria is a cute romance game that takes place in nineteenth-century Britain. We follow Lady Emily Whiteley, who was destined to bring House Whiteley into high society. However, her mind craves something more, so she enrolls at an academy known for training young people like herself into becoming full-fledged detectives! From small, petty crimes such as stealing to gnarly murders, Emily will find the truth no matter the case!

The game features 5 romance interests: Herlock Holmes, William Watson, Kenichirou Akechi, Jean Lupin, and Jack the Ripper. Yep, you read that last one right: Jack the Ripper. You’ll just have to play the game to see how his route plays out!

If you enjoy mysteries or the nineteenth-century setting, then you’ll like London Detective Mysteria.

6) Love Spell: Written in the Stars

Love Spell: Written in the Stars teaches you the lesson of always being kind, especially to your elders. Who knows, they might actually end up being a powerful witch who will give you a magical book that contains a spell to make anyone fall in love with you! That’s exactly what happens to the game’s heroine, Luna. The life of this college student changes forever with the help of the book and a talking penguin. All Luna has to do is write the name of the person in the book and they’ll fall in love with her. However, the catch is that the attraction only lasts a month, so the book serves more as a stepping stone to a potential relationship if Luna chooses to pursue one.

The game is hilariously written. Seriously, if you like a main character who will make snide remarks about the crazy events unfolding around her, you will enjoy Luna. There are also a ton of penguin puns, and while I’m not a fan of puns, they’ll get a nice chuckle out of those who do enjoy them.

Love Spell: Written in the Stars is a fantastic debut title by Great Gretuski Studios and is a must for any fan of the otome genre.

Ever wanted to work in the entertainment industry? In Backstage Pass, you play as Sian Goodin, who makes her debut as a makeup artist. In the game, you try to find a perfect balance between Sian’s career, her college workload, and romance. There are four main romance options: a magician named Benito, breakout singer Alvin, renowned British actor John, and a shy model named Matthew.

There are a ton of features in this game. It’s a stat-raiser, which can be a pro or a con depending on how much you like them. You can also change Sian’s clothes. She has over 80 different articles of clothing she can try on. Normally, this wouldn’t be a big deal, but all the clothing changes appear in the game’s CGs. Lastly, the game is fully voiced!

I’ve always liked Sakevisual’s work. I think they did a great job creating separate storylines for each character instead of repeating the same story over the course of four routes. It honestly makes the game worth playing over and over again in order to experience all the content it has to offer.

In Collar x Malice, you play as Ichika, a strong female lead who finds herself held hostage by a group named Adonis. She’s forced to look into the incident known as X-Day, a series of events where the aforementioned group killed innocent people for reasons unknown. However, she won’t be going into this alone. By her side are five brilliant and hot detectives who are going to stop at nothing until they get to the bottom of this mess.

This game is beautiful from start to finish. As I mentioned in my post about female characters, Ichika is definitely one of the best otome heroines currently out there. She isn’t afraid to put her life on the line for the citizens of Japan, and in one route in particular, she is even willing to stand up to one of her male companions.

If you’re looking for a dark otome game, Collar x Malice is the game for you.

In Café Enchanté, you play as Kotone, a young woman who just wants to get away from her mundane and abusive office job. So, she visits her grandpa’s old cafe, which he passed down to her. As she takes a trip down memory lane, she comes upon a door which she’s never seen before. Suddenly, mysterious men pop out, all of whom look like they don’t belong in the human world.

They’re all mythical beings who were regular patrons at the café. Despite having her mind blown, Kotone decides to work at the café. Just when things couldn’t get any crazier, the government shows up!

Café Enchanté is a beautifully crafted otome game. If you’re looking to date some unique romance interests with some otherworldly drama, you’ll enjoy your time with this game.

In Magical Otoge Iris, you play as the titular Iris. She’s a Purifier, a person who helps lost spirits move onto the afterlife. Despite being able to help others, Iris can’t seem to help herself. She has trouble opening up to others and expressing how she feels. After meeting the magician Wynrou and being giving a shapeshifting weapon named Lanneis, Iris’ world shifts from just helping lost souls to a dangerous life that she has to navigate through with the help of her companions.

Magical Otoge Iris is a brand new release that’s full of heart, and while there are a ton of serious moments, the game doesn’t forget to give the player a moment of reprieve through puns.

What hasn’t been said about Code: Realize? It’s my favorite otome game currently out on the market and for good reason.

While some see Code: Realize as a story of romance, I see it more as a story of growth. The game has you playing as Cardia Beckford, who we find alone in a mansion. Throughout her entire life, she’s been told that she is a monster because she has poison coursing through her body. Anyone she touches will melt and endure a painful death. Even being in the same room for too long can cause issues. So, Cardia has come to accept this as truth. She’s a sad, lonely girl who would rather be alone for the rest of her life than cause more heartache.

However, one day, she is rescued by gentleman thief Arsène Lupin and his brilliant engineer friend, Impey Barbicane. They along with three other men—Victor Frankenstein, Abraham Van Helsing, and Saint-Germain—are all willing to help Cardia get rid of the poison in her body. Slowly but surely, Cardia opens up and learns how to defend herself and those she cares for the most. Of course, the romance is great. All five routes are masterfully written, and everyone grows as a person, not just Cardia.

If you haven’t played Code: Realize yet, just go play it!