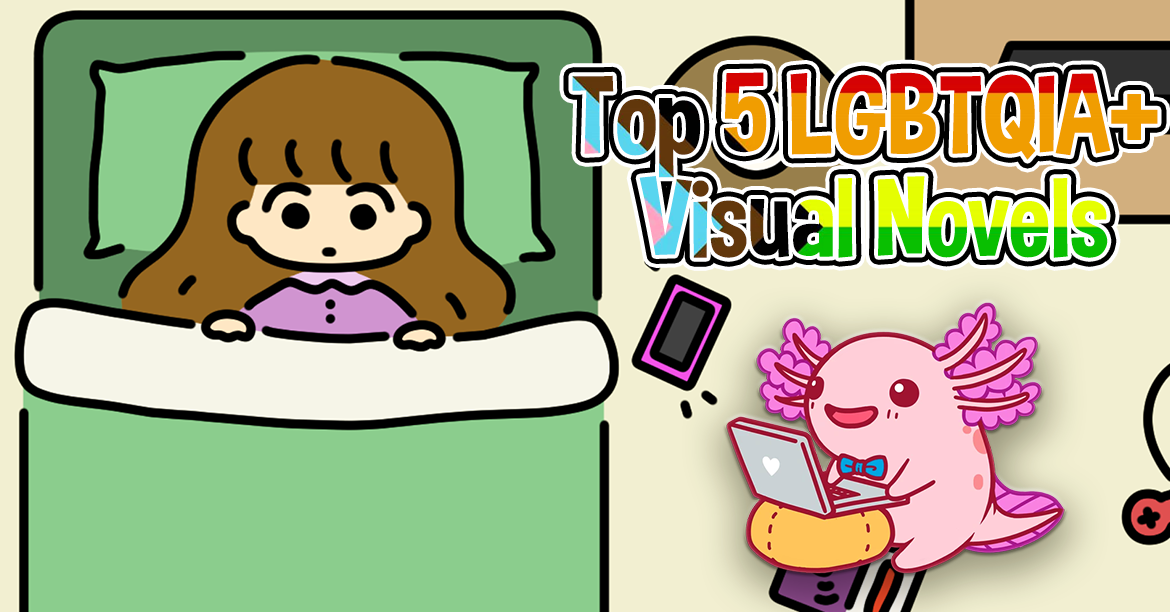 Happy Pride Month, everyone! To celebrate, I wanted to dedicate a few posts giving shout-outs to LGBTQIA+ games. Today, I’ll be giving you a top five list of some great queer visual novels that you need to check out!

Happy Pride Month, everyone! It’s a month of self-love, being proud of who you are, and supporting those in the LGBTQIA+ community. For Pride, I thought it would be nice to create a short list featuring visual novels that are LGBTQIA+. It was very hard to create this list because there are so many great games developed by members of the queer community. While I cannot feature every single visual novel on this list, I highly recommend you browse through either itch.io or Steam to see what else there is. At the moment, there’s also a Queer Games Bundle happening on itch.io where you can directly support members of the community by purchasing a bundle of over 200 items, from games to zines.

With that out of the way, let’s get to the list!

I’ve written about Ace in Space before on my Great Visual Novels That Celebrate Diversity list, so I’m going to avoid repeating myself here. To summarize the plot, the game follows Enby, a young individual who is dying of cancer. One day, robots from outer space land on Earth and take Enby away in order to cure them of their disease.

This is one of the few visual novels that I’m aware of that feature an asexual character. As an ace person myself, even I’m aware of how difficult it is to write a character who is asexual. It’s not hard per se, but there’s this notion that if you don’t have sexual feelings for your partner, then what you have isn’t love but rather a super close friendship. Then, of course, you have some asexuals who participate in being sexually intimate with their partner, so you have people claiming that that person isn’t really asexual.

Ace in Space, in my opinion, is a perfect example of how to write an asexual character and how a healthy relationship can form with an asexual partner. It also teaches a lot about what being asexual is to those who aren’t fully informed on the topic.

Ace in Space is a cute, albeit bittersweet, visual novel that’s full of love that I just can’t get enough of.

Butterfly Soup follows four young queer Asian Americans as they navigate through their freshman year of high school. As the group bonds over baseball, they seem to find more in each other than just a common fascination with the sport. What Butterfly Soup does incredibly well is that this group of teens talks and acts like how kids their age would. Too often in games do we see child or teenage characters acting too “unrealistic for their age.” Diya, Min-seo, Noelle, and Akarsha talk about ridiculous things and make-believe scenarios. There’s one point in the game where Min-seo argues about an imaginary gun she has that doesn’t shoot bullets, but rather shoots mini-guns that shoot exploding knives. It’s these stupid conversations that make them realistic. It takes me back to my own high school days where I would have the same kind of banter.

Another thing that I believe makes this game stand out is that it just follows the daily lives of these four young individuals. They try their best to navigate life and answer the questions they have about who they are while facing life’s struggles, such as abuse and homophobia.

Butterfly Soup is a short, cute game that’ll have you laughing during its entire playtime.

3) A YEAR OF SPRINGS

A YEAR OF SPRINGS is a collection of three games: one night, hot springs; last day of spring; and spring leaves no flowers. Originally all game jam titles, the collection features brand new endings exclusive to the trilogy collection. The set of games focuses on three friends: Haru, Erika, and Manami.

In the first installment, one night, hot springs, an anxious trans woman named Haru goes to a hot spring but feels like her presence might cause issues with the other patrons.

In last day of spring, we follow Erika as she tries to plan a spa day for Haru.

In the final game, spring leaves no flowers, Manami is the focus. She’s currently dating a boy named Tatsuya, but she questions what romance means to her after learning a secret about Haru and Erika.

All three games are incredibly touching as the three characters come to terms with who they are and learn to be comfortable with themselves. While there are the free jam versions of each game in the trilogy, I highly recommend buying the $5 bundle. It’s well worth it, and you’ll be supporting a wonderful creator.

If you’re interested in learning more about the creator behind A YEAR OF SPRINGS, npckc, check out the interview Karla did with them!

In Yearning: A Gay Story, you play as a young gay man attending his first year of college in the Midwest. The game isn’t entirely focused on the academic side of things, however. Instead, it’s really focused on navigating adult life as a gay man trying to come to terms with his sexuality in a world full of people who may love him or hate him for it. As a result, it isn’t easy for our main character to come out; it’s a realistic portrayal of how members of the LGBTQIA+ community feel with coming out. It’s not a straightforward thing. It’s a process that fuels so much anxiety in queer people. Some can safely come out; there are those are anxious, afraid of what their families or peers might say; and there are individuals who stay closeted because they’re afraid of losing everything.

The game is packed full of colorful characters and choices. If you’re a fan of having a lot of choices when it comes to your visual novels, then look no further than Yearning: A Gay Story. There’s a ton of choices to make in this game, which can result in a variety of scenes, different paths, and endings.

If you want a realistic story about being gay and trying to come out in today’s world, then check out Yearning: A Gay Story.

You can check out our review of Yearning: A Gay Story here.

Errant Kingdom is a visual novel that’s right up my alley. It’s an inclusive, queer visual novel full of political intrigue that keeps you guessing until the next chapter. There’s so much in this game that, honestly, it shouldn’t work. Yet it does, and masterfully so.

You play as a denizen of the kingdom of Novus, which has recently been thrown into chaos. You can calm things down and restore the kingdom back to the way it was—or sit back as you stoke the flames of chaos, because being a good guy is boring!

You’re able to select from three different character types: the Knight, the Ambassador, and the Nomad. From there, there are six unique romances and even two polyamorous relationships, which is a rarity. There’s a character, or characters if you go down one of the polyamorous routes, for everyone. The LGBTQIA+ community is represented very well in this game. Just like the rest of the games on this list, I feel like everyone in this game is something beyond their sexuality or identity. They’re not just that queer person or trans character. Yes, they are that, but they’re so much more. They’re actual characters we can relate to and love.

If you’re looking for a game filled with adventure, then do yourself a favor and play Errant Kingdom!