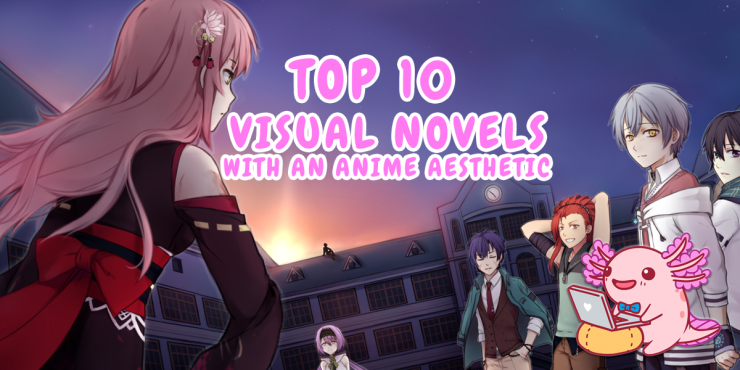 These visual novels give off anime vibes!

Visual novels have frequently inspired anime adaptations; an example of this is the 2004 visual novel Clannad, which was followed by the anime series release in 2007. Another example is 2009’s Steins;Gate, which received an anime adaptation in 2011. There’s a certain aesthetic that anime frequently fulfills, both in art style and even the story progression, so with that in mind, these are the top ten visual novels that could make it as an upcoming anime show or movie.

10. The Warmth Between Us

It is late December in Taipei. The pavement glows like silver under the winter rain. That’s when we met for the first time. The warmth between us has a certain comfort that I’ve never felt before.

The Warmth Between Us is a kinetic visual novel that evokes a similar feeling as the animated movies 5 Centimeters Per Second and Your Name. The story for this visual novel is simple yet touching, following the relationship between two people who meet by pure chance. The Warmth Between Us features art so crisp and polished you’d think they were still frames from an actual anime, which is why it’s given a spot on this anime aesthetic list.

A visual novel of modern-day fantasy, bonds, and a mystery that brings misery to the children born with a strange power.

Reimei no Gakuen was released to Steam this year on February 11th, and it’s worthy of being transformed into an anime show because of its rich story and anime-style artwork. This game would make a fantastic supernatural anime with demons, witches, magic, romance, and mystery. The story clearly has a lot to offer that would make for a captivating show.

Royal Alchemist is a fantasy visual novel that takes place in a fictional world riddled with political tension. The game offers a very creative story which could easily be adapted into an anime. Royal Alchemist has gender options and multiple endings, so it’d be interesting to see how that would change in a hypothetical anime version.

If there was a robot that could laugh, cry and smile. …Does it have a soul?

Lucy – The Eternity She Wished For – is a visual novel that’s sure to take you on an emotional roller coaster. If you’re a seasoned anime fanatic, then you might be drawing connections to the anime Chobits, but I’d say Lucy has a different perspective on the boy-meets-A.I. trope; the modern take the story makes would make the anime version of it worthwhile.

After a comical series of events, you are suddenly recruited into a spy agency!

TEISATSU is a NaNoReNo 2022 submission that has an action-packed story with interesting characters and phenomenal art design. The one-line synopsis is enough to reel me in, and if it were an anime, I’d binge-watch this all night. Secret spies mixed with romance is my absolute favorite romance setup of all time.

You live in a small, peaceful village. Every day is the same as any other; boring. Right when you wish for something exciting to happen, strange things start to occur, stemming from the nearby forest. If that isn’t enough, the locals have begun disappearing. At the same time you meet four mysterious guys. Will you discover the truth before becoming the next target?

Dark Nights is a fantasy/mystery visual novel with phenomenal artwork and an opening video that’s up to par with traditional anime openings. The game is roughly ten hours in length, which is sufficient content to fill out a couple seasons of an anime. Although an anime is not in the works for this game, the developer has hosted a campaign on Ko-fi to gather support for the development of new routes.

You stumbled upon an app called “Mystic Messenger” and downloaded it. Once you opened it up the app is connected to a mystic group chat with attractive guys. You are asked to join their secret party planning association called and the story begins…

You may be wondering how a mobile chatroom dating sim could possibly be transformed into an anime, but if you’ve played Mystic Messenger, then you know how crisp and plentiful the artwork is; so much so that it’s impossible not to imagine what the game would be like if it were fully animated. If anything, the chatroom style of the game makes me want an anime version even more, because I want to see the characters in a new light instead of mainly chat messages.

Crystalline is a visual novel with stellar art design in both character design and background art. The story follows a similar structure to the Sword Art Online concept, where the main character leaves the modern world and enters a fantasy universe. If I had to choose a visual novel to win an award for worldbuilding and design, it would be Crystalline. I think the world that PixelFade created would be an excellent setting for a fantasy adventure anime.

Welcome to the only killer dating show where ending up single means ending up dead! Date or die, it’s up to your choices!

Find Love or Die Trying is definitely meant for TV, and it’s not just because the story itself is about a TV production that’s remarkably similar to the reality show The Bachelor but with a dark and exciting twist. Find Love or Die Trying surely maintains an anime aesthetic, with the exceptional character designs making this game stand out from the rest.

1. The Shadows of Pygmalion

For as long as anyone knows, beings called “Puppets” have operated in service of a force unknown, quietly manipulating the course of history. One day, Hajiro Mina has a chance encounter with one of these Puppets, ultimately changing her life forever.

The Shadows of Pygmalion is a visual novel featuring high school girls with supernatural capabilities who must fight entities known as Puppets. The atmosphere of the game is very similar to Puella Magi Madoka Magica, where girls with supernatural abilities are pitted against evildoers. The Shadows of Pygmalion has epic fight CGs, adorable yet powerful characters, and a plethora of artwork that makes the visual novel itself feel like an anime.