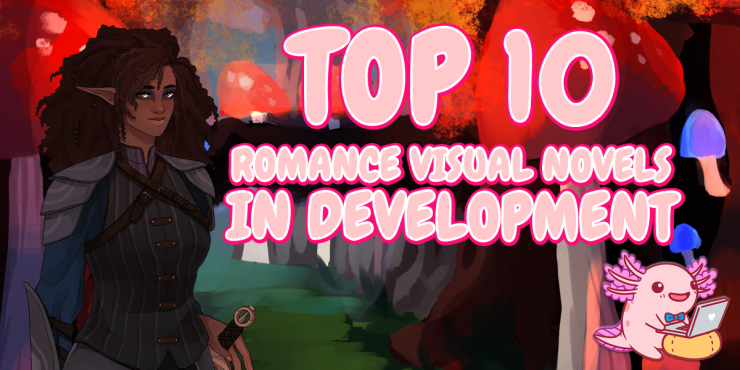 These romance visual novels have something unique about them!

There are so many outstanding romance visual novels in the works right now that any one of these could have easily been #1. Read on to see what each of these romance games have that sets them apart from the competition.

Many years have passed since the events of A Tale of the Eagle Sword took place, and those days have long faded into the folds of history. Yet the legend of Higre Darveru and his companions still charm the minds of modern people. A certain studio has decided to capitalize on the popularity of this romantic tale and produce a best-selling historical drama.

Take on the role of the avid-fanfiction-writer protagonist as she ventures into the set and gets closer to the colourful members of the drama’s cast. But not all is what it seems, and she soon finds herself at the centre of a plot very different from what she signed up for…

At first glance, this game may seem like a historical fantasy otome game, but what’s unique about it is it’s actually set in a modern-day setting. The protagonist/fanfiction writer is at the center of a TV drama production—the perfect backdrop for a romantic comedy! This story is bound to be a fun read, and I’m excited for the full release!

Alaris is a fantasy-romance visual novel currently under development. It features a strong lead protagonist, 6 possible love interests, and an array of choices that may impact your personality, relationships, and fate. What secrets and relationships will you find?

Humanity has access to dragon energy in this fantasy romance visual novel. Humans wielding ancient draconic power? Sign me up! This unique narrative is something that sets Alaris apart from other romance visual novels. Another great thing about this game is that the protagonist is very customizable; you can decide their pronouns, name, and personality.

Trouble Comes Twice is a slice-of-life college visual novel. Play as Jace (m) or Hazel (f) and romance a cast of pretty bisexuals.

Trouble Comes Twice is an LGBT-friendly game, as the synopsis reveals, so there are a variety of romance options you can mix and match [BxG/GxB/GxG/BxB]. It’s refreshing to have two unique protagonists with full sprites and intricate backstories to their characters. This game is slated for an early 2022 release, but you can preorder now via the itch.io page.

When an ordinary college student witnesses the death of a young woman, she is thrust into a world she never knew existed — a world alongside her own filled with magic, danger, and a cast of unbelievable characters. Forced to take the place of the woman she tried to save, she must prove herself by passing the trials of the Radiant Council or risk losing her memories forever..

The Radiants is a romance visual novel filled with magic and danger. All of these elements together are the perfect recipe for an engaging romance game. I’ve always been a Harry Potter fanatic, so stories revolving around magic academies never cease to entertain me. Overall, the premise of The Radiants is very intriguing and full of mystery, and I like when dating sims have a powerful plot to hold your interest.

“The Pirate Mermaid” is an otome visual novel with many different choices and possibilities. You could become a legendary pirate, mermaid queen, sorceress, or (heaven forbid) lobster dinner. Your actions may make the other characters into your friends or lovers…or perhaps victims and slaves.

Pirates and mermaids are not common characters in otome games, so it’s exciting to see this implemented. The background art and sprite design are so vibrant and charming that I can’t wait to see more. I hope the release is on the horizon, because I have a feeling this mermaid/pirate dating sim is going to be an instant favorite.

As an RPG-visual novel hybrid, our game offers the best of both worlds — the rich storytelling and detailed character graphics of a visual novel, and the ability to interact with your environment and the people around you like in RPG games.

Stand By Me has the polished look of an AAA RPG title. It blends fantasy, romance, and RPG gameplay elements, and that’s what makes the game so appealing. Aside from mechanics, the visual design of the characters is stunning. The story is intriguing and adventurous, ideal for those who are fans of the isekai genre.

The Good People (or its Irish equivalent spelling, Na Daoine Maithe) is a romance and adventure-oriented visual novel, and the first of Moirai Myths’ gaming projects. It’s set in mid-19th century Ireland, and in the story, the player character is lured into Tír na nÓg, the Celtic Otherworld, after being robbed of their family’s personal valuables. In order to return home, you must team up with one of six available allies (i.e. the route characters) who are willing to assist in your escape. Well, for a cost…

The artwork is absolutely stunning, and the fantasy story and rich world lore is what gave this project an edge over other titles. The Good People is still in the early development stages, so more details about the project are to be revealed. You can find more about the game and see some of the wonderful art directly on the developer’s website.

Heart Sigil Elchemia is a grand fantasy-romance visual novel, following a serious and determined protagonist fighting to solve the case of ishim madness. She can develop a unique relationship with each of 4 male love interests as they pursue the central mystery together. Multiple plots and resolutions are available!

Heart Sigil Elchemia is an otome visual novel with alchemy and other fantasy elements. The story features a unique concept involving creatures known as ishim. This game has a strong narrative, and this is something I appreciate from romance games.

You can read our review of the Heart Sigil Elchemia demo here.

Snail Story: Love Edition is a dating sim that is choice-driven and with multiple good and bad endings.
There will be a mystery element involved, which shadows a predominantly romantic storyline.

Snail Story: Love Edition is a otome visual novel with mystery. You play as a female snail person and have the option to pursue two of the male love interests. The game is incredibly polished in every aspect. With such an unconventional storyline, Snail Story surely stands out from other titles. I had the chance to play the demo and was thoroughly impressed by how well-written and immersive the story was.

“Peachleaf Valley: Seeds Of Love” is a romance visual novel/otome game whose premise is inspired by farming-sim genre classics. Dive into a world filled with beauty, nature, and love as you become the newest resident of a lush valley where the sea, the sky, and the land all seem to meet…

Being a farm-sim fanatic and avid Stardew Valley player, I was instantly attracted to the premise of Peachleaf Valley. I love that the main character is a big-city girl who decides to uproot her life and move to the country; it’s a trope that I find very relatable. Aside from the story, the art is very pristine and the suitors are everything you could ask for in an otome game.