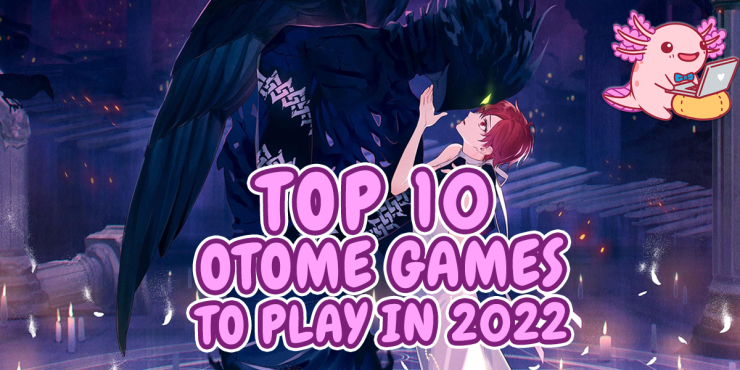 There is no shortage of otome games slated for this year, and while many have been released in English in 2021 to early 2022, some are still underway as we transition into spring. The rest of the VN Game Den team might have their own selection, but these are my top ten otome games to play this year.

A visual novel of modern-day fantasy, bonds, and a mystery that brings misery to the children born with a strange power.

This game was developed by an independent developer, with the amount of artwork, story, and hours of gameplay packed into Reimei no Gakuen up to par with its higher-budget competitors, yet the game itself is offered at only a fraction of the price. What draws me into this game is the rich story and beautifully designed artwork. This game has fourteen possible endings, which is remarkable as far as replay value.

What’s love got to do with it? In this divine romantic comedy, play as Lynette Mirror, Cupid Corporation’s top bridal advisor and none other than Celestia’s Goddess of Love, Cupid! Determined to prove that love is more than bows and arrows, she meets her biggest challenge yet – the infamous Parasite 5.

But in finding love for the Parasite 5, will Cupid find love herself?

Cupid Parasite was launched in English at the end of 2021. I love romantic comedies in all shapes and forms, and Cupid Parasite has the kind of premise you’d see in motion pictures. This is an ideal slice-of-life story to play while you are patiently waiting for the later 2022 releases that are set to come out.

Raging flames sear her flesh. Scolding laughter weighs her down as lead. Her last moments are as she lived: bereft of love, void of hope, and overflowing with despair. And then, she dies. A witch whispers to the girl steeped in regret. “Don’t you want a second chance?” The witch bestows upon her the power of the “Fatal Rewind,” and her charred life is returned to a pure white. A blank slate. “This time, I will transform into the ideal version of myself.” With this oath branded into her heart, she returns to life. …Yet this resolve will only lead to further misfortune. The curtain rises on the Carnival, and this witch trial shall herald the end.

Voltage games were some of the first otome games I was introduced to, and I think fondly of their content because of this. even if TEMPEST looks to be one of the most story-rich games Voltage has come up with. The synopsis is compelling. A story comprised of witches and second chances to make amends reminds me of classic fairy tale stories but with a twist, and I am a big advocate of fairy tale adaptations.

Lights, camera, action! A hilarious comedy about the entertainment industry and the colorful characters that populate it.

I first heard about Lover Pretend during the All Aksys 2022 event, and the trailer was so colorful and energetic that I was excited to find out more. Having worked in the film and entertainment industry myself, I find this premise particularly relatable. Although I’ve never been in the same situation as the protagonist of being offered a selection of suitors in show biz, I’m excited to see the otome game version of working in the film industry. And in Lover Pretend’s case, this means going from being a film assistant to the star of the show!

Amnesia Later and Amnesia Crowd are sets of stories that relate to the original Amnesia: Memories.

Amnesia: Memories was another one of my first otome games, and there’s a lot to love about it. The Switch port has been announced for an English-language release this summer. More is to be revealed about the contents of the stories, but if it’s anything like the original, then we are in for a treat. Players can expect to accompany the same love interests in addition to new minigames!

Experience the continuation of each character’s story from Piofiore: Fated Memories in five all-new episodes, a thrilling tale of mystery and murder, and an alternative what-if scenario that sheds new light on a familiar face.

I’m always in the mood for a historical romance, and when you throw mafia in the loop, it’s a done deal. Piofiore is a gorgeous game, and if you played Fated Memories, then this sequel is sure to steal your heart. Aksys announced this game for preorder during the All Aksys 2022 event, and I couldn’t be more ready for another dive into the mafia world.

Torn between warring factions and a desire for a peaceful life, can Shanao forge her own path – and find someone worthy of her journey in this visual novel?

Birushana was originally released in Japanese in 2020 and will be releasing in English in September 2022. Historical romances with action and adventure hold a special place in my heart. I love the thrill and excitement that games like Hakuoki have to offer. While I am a romance addict, I prefer the main story to have a strong foundation and to be rich with lore and adventure, and for romance to be the secondary part of the story. The latter may sound contradictory for a romance game, but I prefer to be invested in a strong narrative first and foremost. That being said, Birushana definitely seems to be a story-rich otome game, so I’m eager for its release.

A romantic action-adventure visual novel based on Robin Hood lore. Play as Lady Marion and choose what kind of leader and lover you want to become. Join Robin’s rowdy rebels in Sherwood or tackle the political pitfalls of the Sheriff’s Nottingham. Fight for freedom and fall in love!

Made Marion reaches further than many earlier English-language otome games, offering a nonbinary love interest, love interests of color, and a female romance option as well. I really value games that exhibit skin tone and gender diversity, and I think that with the growing number of otome game fans, having a diverse cast is important. On top of Made Marion’s apparent success at providing fans with an array of options, the story itself is very compelling. I’ve pointed the spotlight at Made Marion throughout a few of my articles now, but it has the potential to transcend the otome genre, and I think that makes it worthy of a lot of positive attention.

Hibari is the sole heir to her family’s fortune.

Her grandfather is determined to find her a husband. He houses her in a luxurious home with handsome bachelors. As the men try to win her hand, Hibari endures endless trials and temptations.

Has Grandpa chosen poorly, or is there more to these men than meets the eye? Hibari decides NOT to fall in love.

I have to be honest, I preordered this game right after I wrote the All Aksys article. Variable Barricade is right up my alley because of how unconventional the love interests are. They’re far from perfect, and I love that kind of irony in a romance game; it also makes the characters feel more human. I think it gives the player a chance to really fall in love with the suitors because we have to actually get to know them. Besides, it’s hilarious to see Hibari set up with suitors that she can’t stand. One of the love interests is a walking debt generator, another is a kept man, one more is a gambling addict, and the last committed marriage fraud. It’s a setup for the perfect romantic comedy.

“Peachleaf Valley: Seeds Of Love” is a romance visual novel/otome game whose premise is inspired by farming-sim genre classics. Dive into a world filled with beauty, nature, and love as you become the newest resident of a lush valley where the sea, the sky, and the land all seem to meet…

Despite the majority of the games in this list hailing from larger developers, an indie visual novel takes my number-one spot. With Peachleaf Valley’s release on the horizon for 2022, there are a few reasons why this otome game is my most anticipated game. Farming sims are in demand now more than ever, and I myself am a Stardew Valley fanatic. While this upcoming otome isn’t a farming sim, the story of Peachleaf Valley follows a similar narrative that many farming sims do, but with the story and romance aspect in full focus. Both the sprite and background art are stunning, and as far as the story goes, I am particularly keen on Naadim’s story and what is in store for his route.