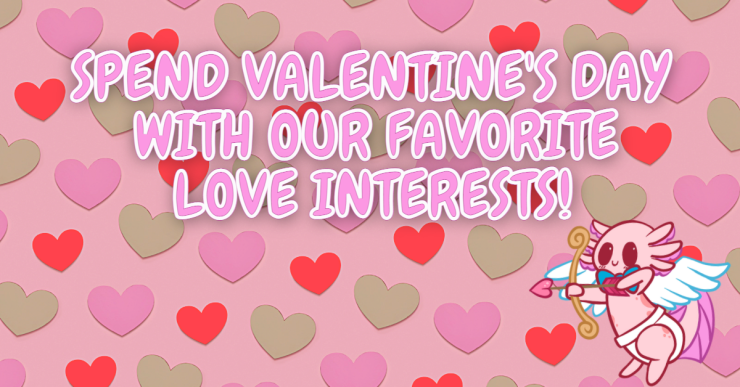 Take a look at this list of some of our staff members’ favorite romance options!

Valentine’s Day is here, and this year you can spend it with some of our staff members’ favorite love interests.

Souji Okita from Hakuoki is one of my favorite love interests. Okita has a playful personality and is constantly teasing you. But when things get serious, he’ll lay down his life for you, and that’s what I love most about him. Sickness and injury constantly bog this man down, but he never lets that stop him. He’s committed, and he’ll fight to protect what he believes in and the people he cares about.

Collar x Malice is one of my favorite otome games, and the leading love interest is Aiji Yanagi. Yanagi is a private detective and a natural-born leader. He’s calm and collected, and that kind of level-headedness is so appealing because it gives you the reassurance that he’s a guy you can depend on. Reliability is a quality I really value in people.

The whole reason I played Collar x Malice was because of how handsome Yanagi was. And then I played Kei Okazaki’s route and was blown away by his character. Okazaki has a soft side, a silly side (randomly falling asleep in alleyways), and a serious side where he can be very protective. He’s also flirty, and his lighthearted scenes are a breath of fresh air within the darkness of the plot.

Code: Realize is one of my favorite otome visual novels, and there are two love interests in there that are my favorite. They also happen to have completely opposite personalities.

First is Abraham Van Helsing. He’s a confident character who (much like Victor Frankenstein) has a dark past. But what is truly amazing about Van Helsing is his swap from keeping Cardia at arm’s length, to then having a strong commitment to her.

Victor Frankenstein is a shier character in his relationship with Cardia. It was refreshing to have a character that is such an opposite from Van Helsing and didn’t completely hide from his feelings, but also doesn’t feel right broadcasting it.

Both of their romance routes really take off after the end of Guardian of Rebirth into Wintertide Miracles and ending in Future Blessings. Their relationships blossom into a wonderful story that unfolds.

Enix from Love Spell: Written in the Stars is such a lovely love interest in the game. He’s the main character’s childhood friend and they reconnect! I think it’s a really sweet story, and their romance is one of my favorites in the game because of how more connected they are to one another. Also, who doesn’t love a guy that’s into video games?

Just like Courtney, I’m a big Code: Realize fan. Except I’m a little biased for the cover boy, Arsène Lupin. Sure, you have to complete every other route to unlock his, but as you can see in my article “Romances You Have to Work For,” he is very much worth the extra effort. Arsène is a gentleman thief who ends up stealing not only Cardia’s heart, but players’ as well. Plus, the top hat! Who doesn’t love a guy in a top hat?

Chivalry certainly isn’t dead, at least not in Edo-era Japan! Sanosuke Harada hails from the well known otome game series Hakuoki. While he’s a samurai who is fighting for peace, Harada’s character truly shines when he’s off the battlefield and doing mundane things like cooking. It’s these sweet moments where we learn that he’s a family man at heart who wants to find someone special to build a future with.

It may be February, and it may be freezing for some of you (depending on where you live), but that doesn’t mean you can’t pretend you’re in a small beach town with the future love of your life! In Our Life: Beginnings & Always, you can create your own character and choose how they interact and grow up with the game’s main love interest, Cove. Cove is a fascinating character who can change subtly depending on your choices. What remains the same, however, is his growing affection for you. Play by your rules and at your pace with this precious cinnamon roll!

Who doesn’t love a himbo?! Originally when I started playing Monster Prom, I was 100% on the Miranda or Polly train, but after trying out Scott’s route, I fell in love. His storylines are always goofy and lovable, like the big dork he is.

Who doesn’t love a dagger that turns into a hot lady?! Ever since I saw Valeria in the Boyfriend Dungeon demo at PAX East, I just knew she was my type. Her storyline shows you what a creative and caring person she is and just makes you want to be held by her. Also, she’s very hot, I’m a big fan of that.

Who doesn’t love a quirky gamer girl?! Naomi of Arcade Spirits is a mechanic at the arcade the game takes place in, which, as a big fan of Atlantis, appealed to me immediately. Whether you romance or befriend Naomi, she’s a wonderful character who makes it difficult to replay the game because you just want to romance her again!

Mason from Hustle Cat falls into one of my favorite love interest archetypes: a quiet, seemingly aloof character who turns out to have a caring streak a mile wide. She might seem intimidating at first, but it becomes clear as the story goes on that she’s just as sweet as the pastries she makes, even if she has a hard time showing it. She’s the kind of character where you learn how to see all the small signs of her affection, as opposed to large and showy gestures—and that’s the appeal!

The protagonist’s commanding officer in When the Night Comes, August Willenheim ends up filling a similar niche for me (what can I say—I’m predictable), but with a different execution. August struggles to reconcile their duty as an Enforcer with their own personal and emotional needs, and shows deep regret for their past incorrect judgments. While they might seem prickly when they’re first introduced, time and character development show that they too have a heart of gold.

And now for someone completely different! Deliver Us From Evil‘s Ace is a flirty type, willing to make a pass at just about anyone who’s receptive to it. What makes him stand out from other similar love interests, however, is how dedicated he is to making the protagonist feel safe with him. That plus the secrets revealed about him make his route extremely satisfying, and I’m looking forward to the game’s upcoming polyamorous route DLC with him and Keldran.