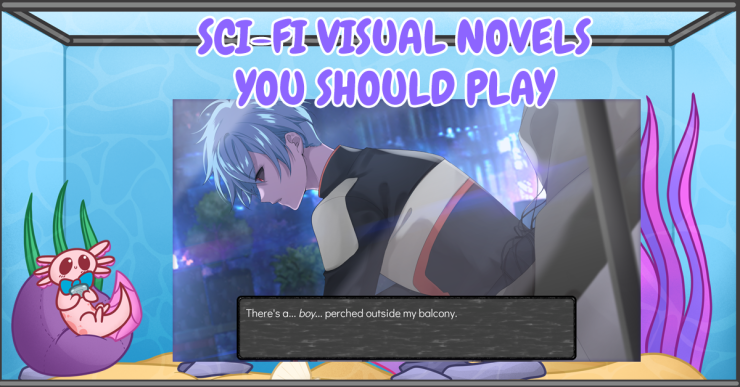 Sci-Fi Visual Novels You Should Play

These are a few sci-fi visual novels that we recommend checking out!

There’s something exciting about science fiction stories; they narrate a world where science meets fantasy and anything is possible. Humanoid robots, laser guns, and cyber cities are just some of the elements you can find in the genre. This article is for those of you who are sci-fi lovers, and will cover stories ranging from android romance to paranormal ghost hunting.

Lucy -The Eternity She Wished For-

If there was a robot that could laugh, cry and smile. …Does it have a soul?

Lucy – The Eternity She Wished For – is a visual novel about the relationship between a human boy and his robot, Lucy. Robots aren’t supposed to have emotions, but Lucy isn’t your average android. This game will tug on your heartstrings, so it’s a good choice if you’re looking for a blend of sci-fi and romance.

On your journey you may end up discovering more than what you bargained for, but can you handle the truth of your past or will it end up consuming you? Will you follow the destiny the stars have written for you, or forge a new path?

Cruise on a starship in Andromeda Six as you seek to uncover your lost memories and meet a cast of compelling characters along the way. You can pursue a path of romance or simply keep things platonic as you journey through outer space. This visual novel is released in chapters, and there are currently six episodes released.

Paramedium: A Noise in the Attic

What’s more dangerous, the living or the dead? Spend the night as a Paramedium Cleric and see if you have what it takes to survive…

Paramedium is a spooky sci-fi visual novel about ghost hunters in a cyberpunk world. An organization known as the Paramedium Guild was created in order to defend the world against paranormal inhabitants. You can play as a male or female Paramedium Cleric, and Paramedium: A Noise in the Attic is the first chapter of the series.

My Alien Roommate is a slice-of-life comedy visual novel about an alien roommate who you must keep a secret and teach how to blend in with society. It’s a BxB/GxB visual novel with three love interests, including the alien Enoch. This game has a really unique and playful premise, which shoots it to the top of my list of VN recommendations.

The year is 2121 and mutants are the norm, while ‘normal’ people with no power are trash. The game started with your character getting killed and is offered the choice to start a new life in a new body.

Fast forward a hundred years into the future in Amplitude, an isekai visual novel with a twist: you’re dead, but you get a second chance and your soul enters a new body—but you have to inhabit this body with another person. This game has a fun concept and lets players choose between playing a male or female protagonist inhabiting a male or female body. This game goes above and beyond, offering choices, stat-raising mechanics, and even map exploration!