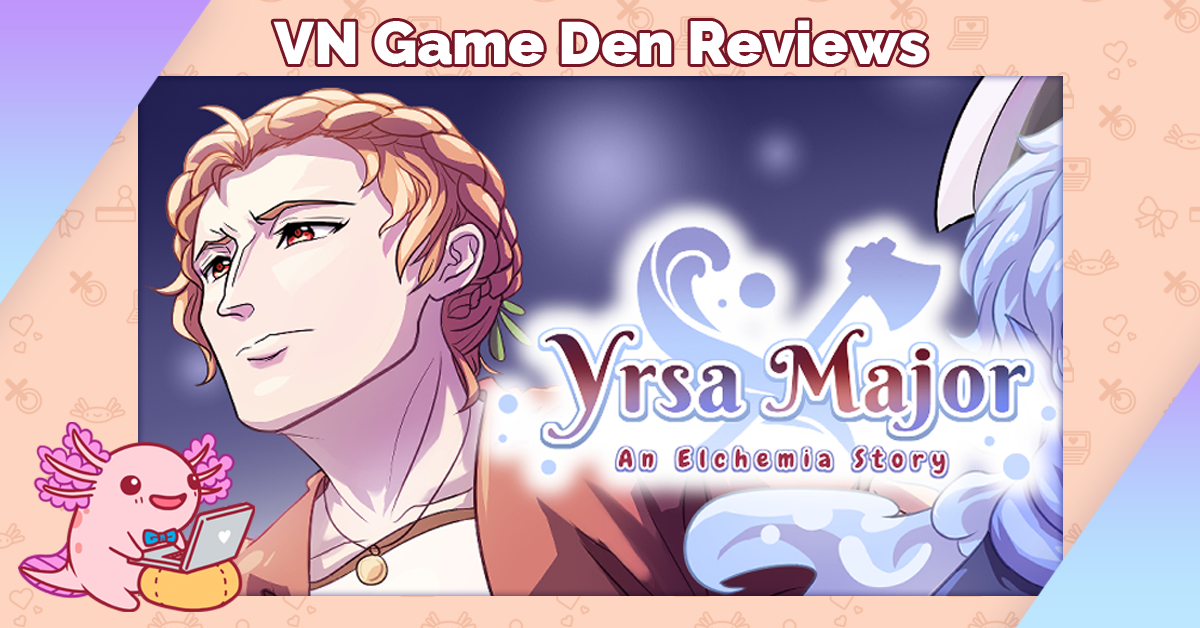 From new developer ShibaList, Yrsa Major is a fantasy adventure romance made for Otome Jam 2021. Woodcutter Yrsa’s only concern is protecting her small village from the monsters that threaten to destroy it. An encounter with a mysterious alchemist leaves her bonded with an ishim, an elemental being. Uribel, however, is a pacifist, more a healer than a fighter. Working together, can they still find a way to protect that which she holds dear? Can she learn to see herself in a new way through Uribel’s eyes?

From new developer ShibaList, Yrsa Major is a fantasy adventure romance made for Otome Jam 2021. Woodcutter Yrsa’s only concern is protecting her small village from the monsters that threaten to destroy it. An encounter with a mysterious alchemist leaves her bonded with an ishim, an elemental being. Uribel, however, is a pacifist, more a healer than a fighter. Working together, can they still find a way to protect that which she holds dear? Can she learn to see herself in a new way through Uribel’s eyes?

A review was requested for this game through the VN Game Den review request form.

The sprite art comes in strong and bold. It’s highly polished, wonderfully expressive, and takes advantage of very small details to elaborate on character and environment. There’s a very subtle American action cartoon vibe bleeding through in the style, but it still manages to maintain the softness one anticipates in a romance story. This ends up being the perfect blend, aesthetically, to match the way the story plays out thematically. A lot of this comes from the character design itself, which does an excellent job of subverting expectations for the genre.

Our main heroine is far from from the waifish ingenue often at the center of an otome game. She’s strong, tall, and broad-shouldered. Her features are sharp and her axe is sharper. She’s physically a force to be reckoned with while still choosing to maintain certain feminine aesthetics. Uribel, the male love interest, acts as the counterbalance both narratively and visually. He’s soft and delicate with thin features. As a water elemental, every element of his design down to his hair flows with that liquid, bubbling intention.

In the very endearing, highly emotional, scenically well-constructed CGs, this difference in aesthetic continues to play out in the loveliest way. Yrsa’s the protector, the one who initially shields Uribel and takes him by the hand. She’s the one who has to lean down to him for a kiss.

This all, of course, plays out excellently in the writing, as well. As characters in their own right, Yrsa and Uribel have an excellent depth to them. Yrsa has an extremely complicated relationship with her own femininity. It doesn’t overwhelm her personal narrative but is still inextricably linked to it at every level. It’s part of a complex identity and not the sole aspect of it, for better or ill. Uribel, as an elemental and new resident of the corporeal plane with inherent softness to him, could have very easily been packed into the box of a naive, semi-angelic being who’s taken advantage of, and he just isn’t. There’s definitely a fish-out-of water element, but he’s never portrayed as being stupid or unworldly. He’s able to intuit how the world works, and he asks intelligent questions about humanity to fill in the gaps. Together, they create a wonderfully dynamic duo that complements each other as they move through the story and the conflicts therein. All, at the same time, constantly hitting up against the old stereotypes of what “feminine” and “masculine” roles are in a relationship and turning them over completely.

This excellent relationship exists in a very well-constructed, organically presented world. It’s not a very complicated setting. It’s got a lot of bog-standard fantasy elements. It’s aware of this aspect of itself, though, and uses those short cuts to point you toward the places where the unique story elements are. The story itself starts off strong with a highly action-packed scene that really shows off the nature of Yrsa’s character in a very effective, interesting way. The stakes are set early, so you know what to expect. But knowing what’s in store for you doesn’t make the story boring. It moves along at a fairly quick pace, alternating between these wonderful character growth and bonding segments and these high-energy, high-stakes adventure moments. When the shoe finally drops, it’s exciting and riveting. You’re waiting for it to happen, and when it does, you can’t help but root for Yrsa and Uribel and be utterly devastated when you get the bad ending the first time like I did.

Yrsa Major is an excellent little adventure romance game. It’s quick and polished, does an incredible amount in a very little bit of development time, but yet never feels compact. It feels like a small part of a much bigger story that leaves me wanting more, but also happy that it didn’t feel the need to drag its feet or over-construct itself. It’s the perfect short game for adventure lovers looking for something just a little different in their main character and love interest.

Get it now or play in-browser on itch.io.