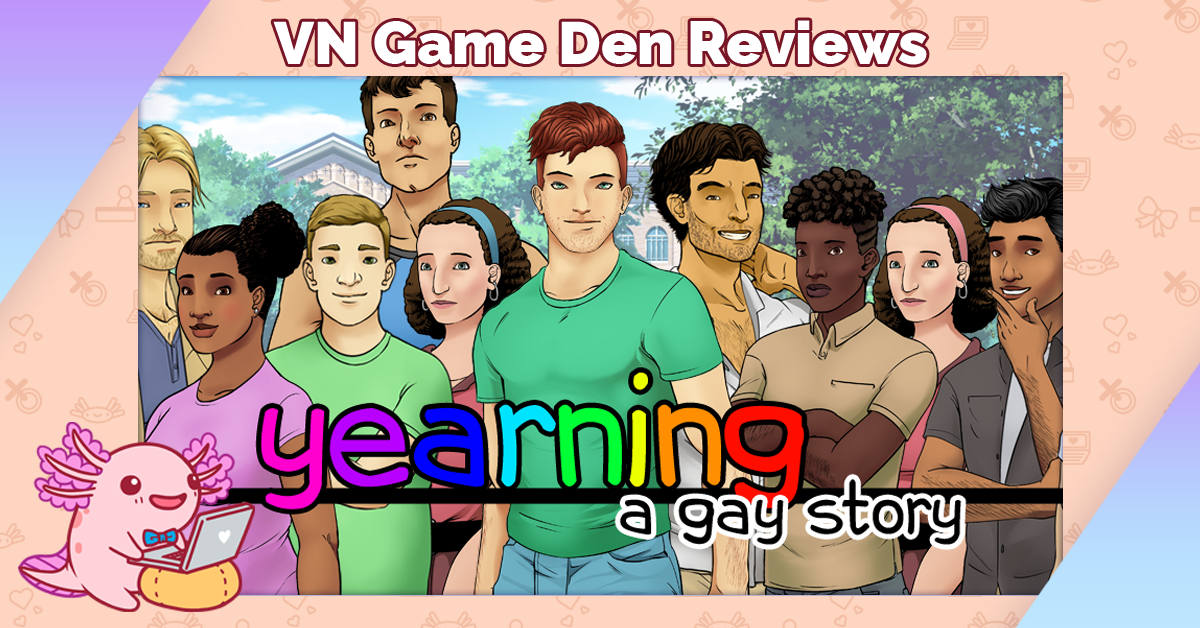 Sit in the life of a young gay man starting his first year of college. Struggling with his own identity and the multi-layered process of coming out, join him on a journey through love, friendship, and self-acceptance and actualization.

Yearning: A Gay Story seats you in the life of a young gay man starting his first year of college. Struggling with his own identity and the multi-layered process of coming out, join him on a journey through love, friendship, and self-acceptance and actualization.

The art is hard to pin down. It’s technically sound, the backgrounds do a great job of setting up a fun little college town, and there’s a lot of it. There are clothing variations with different levels of dress and undress, the backgrounds have occasional change-ups in them, the cast is huge, and that makes for just a lot of art in general. There’s also a lot of attention paid to diversity of body shape and race. The designs are varied and interesting. The style itself, though, is a little odd. It grows on you as the game progresses, but it’s not really that universally appealing. You can tell the artist has a preferred artistic subject matter, and the rest of the sprite work suffers a for it, on occasion. Some of the expressions are a little strange, and it feels like they maybe have sacrificed polish for quantity sometimes.

The narrative structure of the game is interesting. It takes you through an almost day-to-day breakdown of your life your first semester of your freshman year of college as a recently out young gay man. While this would work great for a more time-management oriented game or a stat-raiser, in the more narrative-centric structure they utilize, it can make long stretches of the game very difficult to get through. There’s all this minutia they felt the need to throw in about going to bed and waking up and getting dressed and how well you slept and unlocking your computer beyond what might be necessary for character development. It bookends every single day segment and becomes just a bunch of extra clicks. And while you expect a slice-of-life story to move a little slower, the plodding nature of this one is only manageable because one playthrough is fairly short—the better part of an afternoon, at most.

If you want to spend time with your friends Jake, Nikhail, and Hannah, for example, to either romance Jake or just because you like them, you’re going to get sucked into a dozen board game afternoons playing the same games over and over and over again, having the same types of conversations over and over. I love board games, but there’s only so many times you can play Carcassonne through text before you go “oh my god, I should have just picked studying for my calc test.” And the times that it does sort of skip through with quick exposition, you’ll see references to scenes that happened off-screen that would have been fun to see play out. Instead you got bombarded with yet another conversation about the weird fries at the burger place.

This gets a little frustrating because I overall like the characters. Some feel a little less nuanced than others, which can generally be chalked up to different routes telling different parts of the story, but there are some very interesting arcs about sexuality and relationships and self-acceptance spread through their day-to-day lives. And while the dialogue can be hit or miss, there are some really great scenes and some good emotional stuff in there. All of it is wrapped up in so much tedium, though, that by the time you get there, it’s hard to enjoy it.

A Lot of Choice Leads to High Replayability

Another double-edged sword as part of this drawn-out story technique is the number of choices you get to make. It’s a lot. Sometimes, like in the aforementioned board game sections, it’s too much and doesn’t feel enriching to the story. The choices about what you’re doing over the course of the day, however, get really interesting. It bucks the traditional “route” structure and encourages you to spread yourself out a little bit as you play. Hanging out with Carlos and Adam isn’t going to devastate your relationship with Jake, for example. You can appreciate the aesthetic of multiple boys or have a hookup without it ruining your romantic chances in the future. That being said, sometimes it feels like there’s more overall story attached to certain characters than others, but not in a way that’s consistent enough for you to know which choices are going to lead to the more beefy scenes. So while this definitely creates a more realistic nuance to some of the choices, it also feels like you’re tying to chase the story down sometimes. There are also some choices that cascade in unexpected ways or that I wish I had been able to make. This does, however, create an eagerness to replay the story and find all the pieces you missed the first time, knowing how it might affect things in the future. The game wants you to replay it, and does a lot to encourage that with rewards like in-game achievements and aesthetic collectibles.

Yearning: A Gay Story endeavors to tell a realistic and nuanced tale about being gay and coming out in the real world as a young person. While it struggles a little bit, it does a lot of that well. It’s equal parts heartfelt and bitter-sweet with a lot of endearing qualities hidden in the roughage. It’s a game that a lot of love went into, and it shows despite any imperfections.

You can download the censored, rated R version from itch.io with an uncensored patch available on their site.