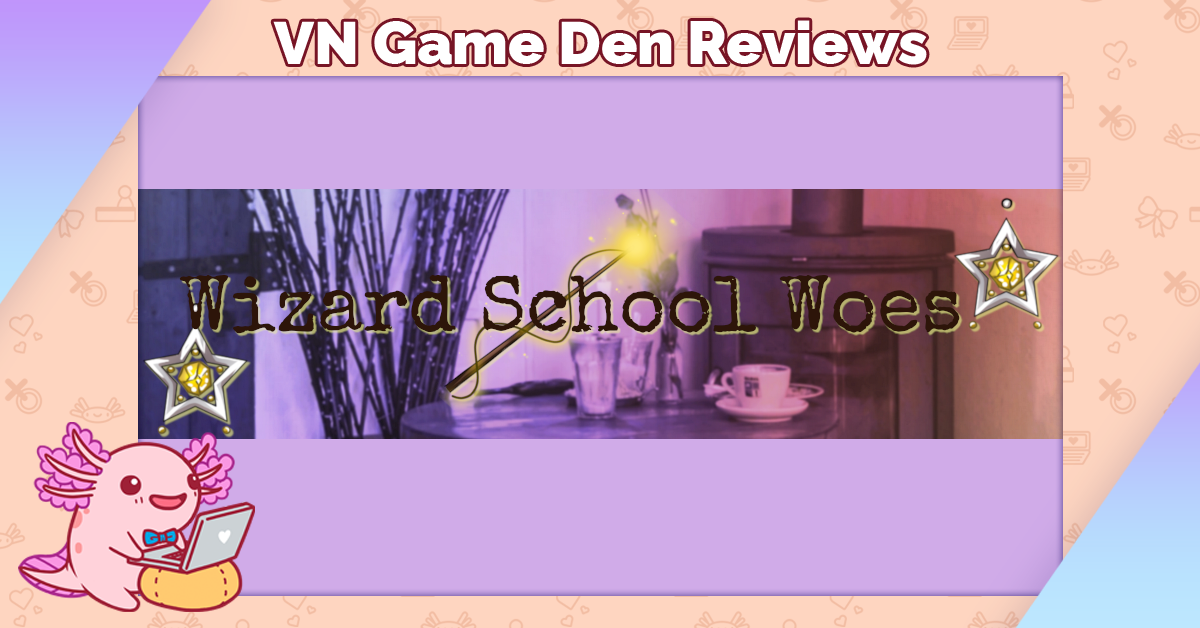 Learn more about novice wizard Ambrosius and possibly help him finish his final project in this short game made in 72 hours for Minimalism Jam.

Wizard School Woes by Jane Titor is a short game made in 72 hours for Minimalism Jam. Spend time asking questions to a wizard in hopes of getting to know him better and help him finish his final research project! 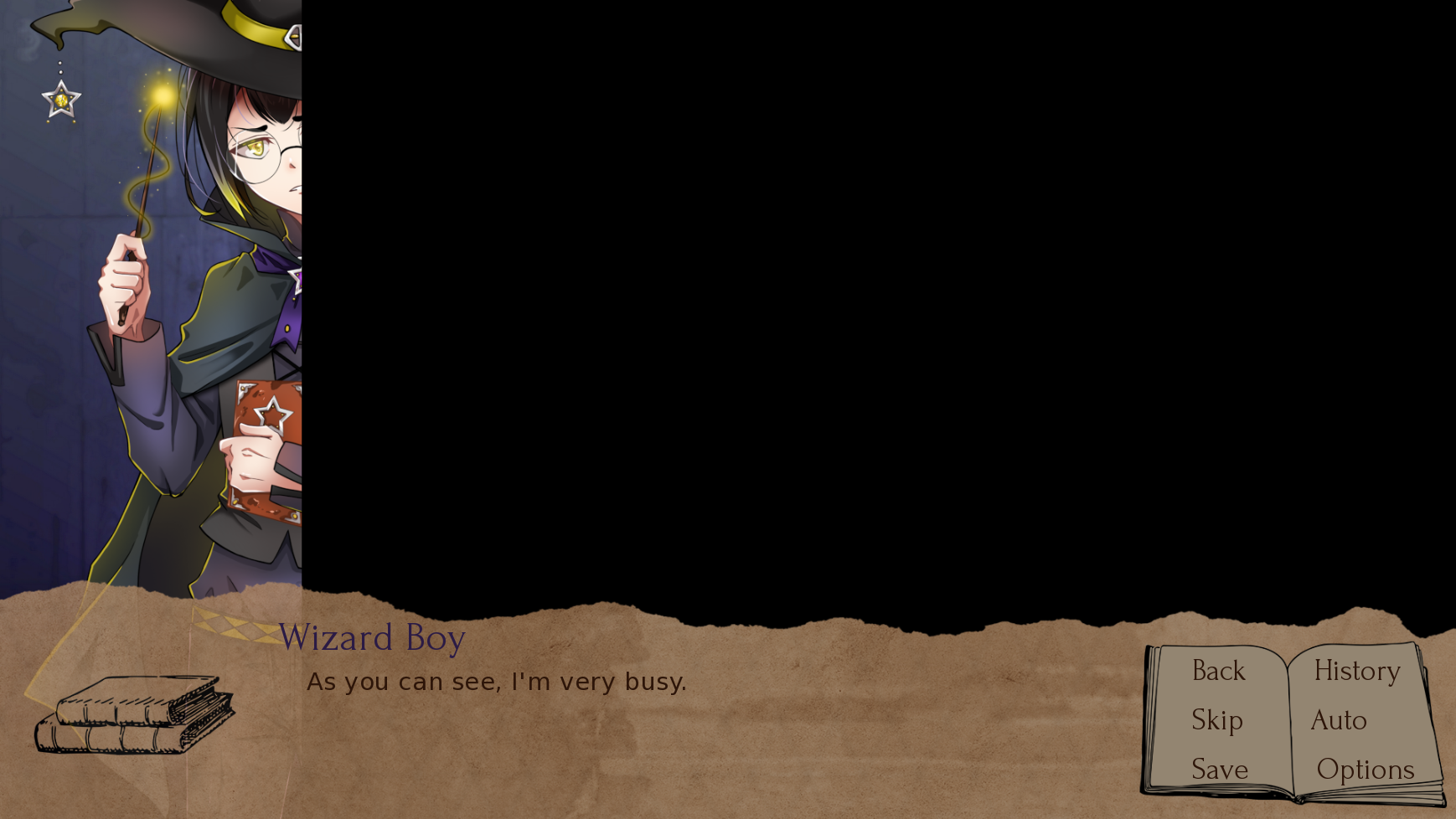 Minimalism Jam takes place over 72 hours, as participants work by themselves to create a playable and entertaining game. As such, my review will take into consideration how much the developer was able to accomplish in that short amount of time.

Wizard School Woes is an impressive visual novel if you consider it was made in just three days. It features quite a bit of content, despite only being about 30 minutes long.

When you first start the game, you’re met with animated text on a black screen depicting sounds such as “crash” and “knock.” Then, we get a glimpse of the wizard boy as he pokes his head out of the doorway. This is represented with a black box over the right side of the screen, showing just enough of the character sprite that it looks as if he’s peering outside at you. I’m actually quite fond of how this scene is handled without the addition of any complex animations or art assets.

From this point on, you’re able to ask the mysterious wizard boy about what he’s doing. He reveals to you that his name is Ambrosius and he’s doing a ritual for his final project at the Lynx Canadensis Academy. To find out more information, though, you’ll need to ask him several questions. 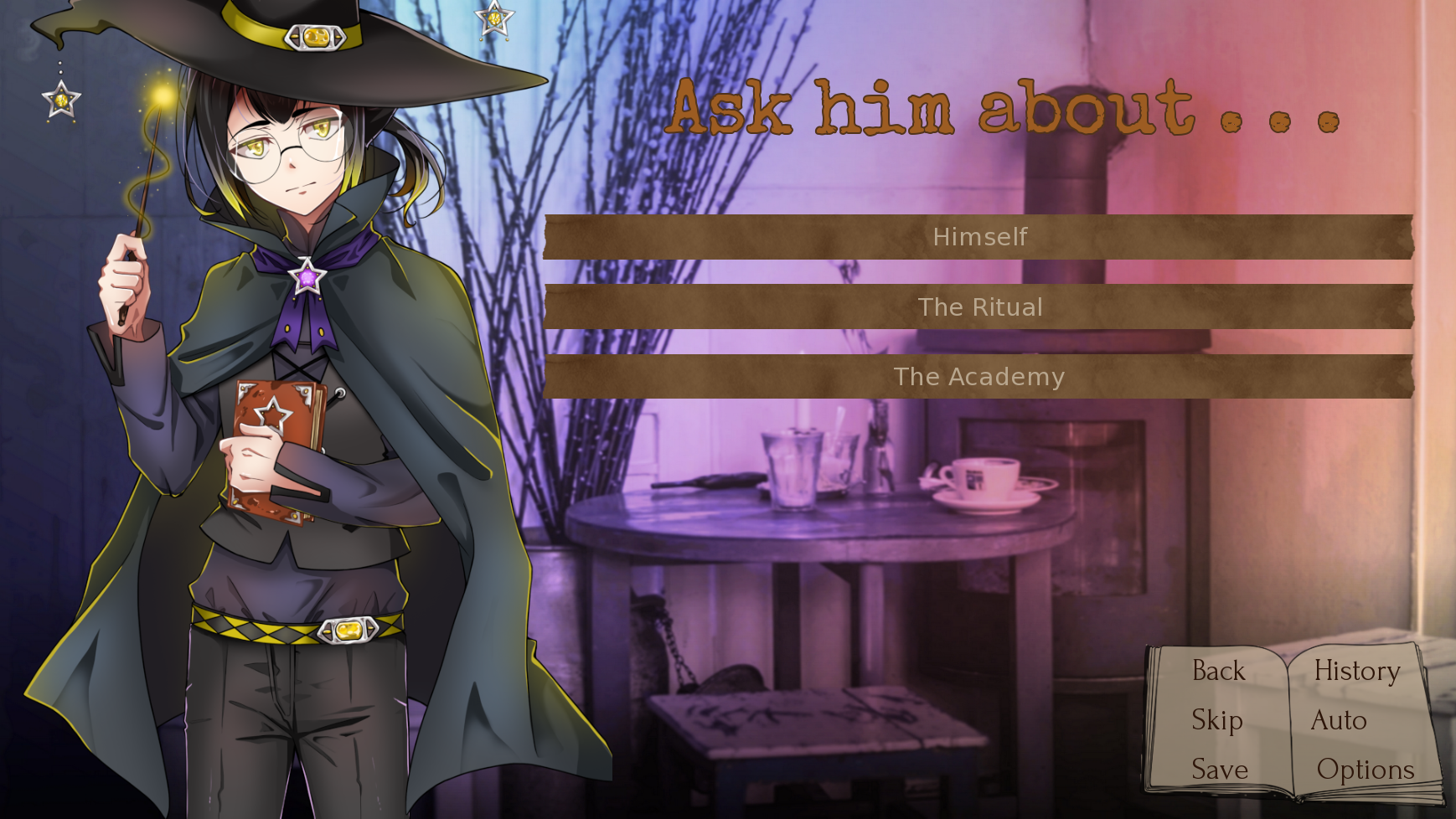 The further you get in your questioning, the more information is given. Text in purple alerts you to new questions being unlocked, and you can ask Ambrosius even more questions to see what you can learn about him. Eventually, you’ll be able to help him solve his problem with his ritual—though he does most of the tough deciphering on his own.

Ambrosius is really well written. He has a clear voice with a very distinct way of talking. His personality, a bit grumpy and stubborn, becomes more clear as you ask different questions. Furthermore, he knows a lot about magic and the magical academy. He’s able to tell you about the game’s lore without being boring or too direct.

The game uses only Creative Commons assets, including sprites, the GUI, and the backgrounds. We don’t leave the small confines of Ambrosius’ house, but in a game so short, it doesn’t really feel repetitive. In fact, Ambrosius is very emotive during your conversations, which makes the lack of scenery changes acceptable.

A downfall that the game has, which the developer makes note of, is the lack of sound effects and backing music. This is due to the time constraints of the jam. In the future, if the developer chooses to update the game, I think it’d benefit from certain sound effects (like a door opening or things crashing about) and, of course, background music. 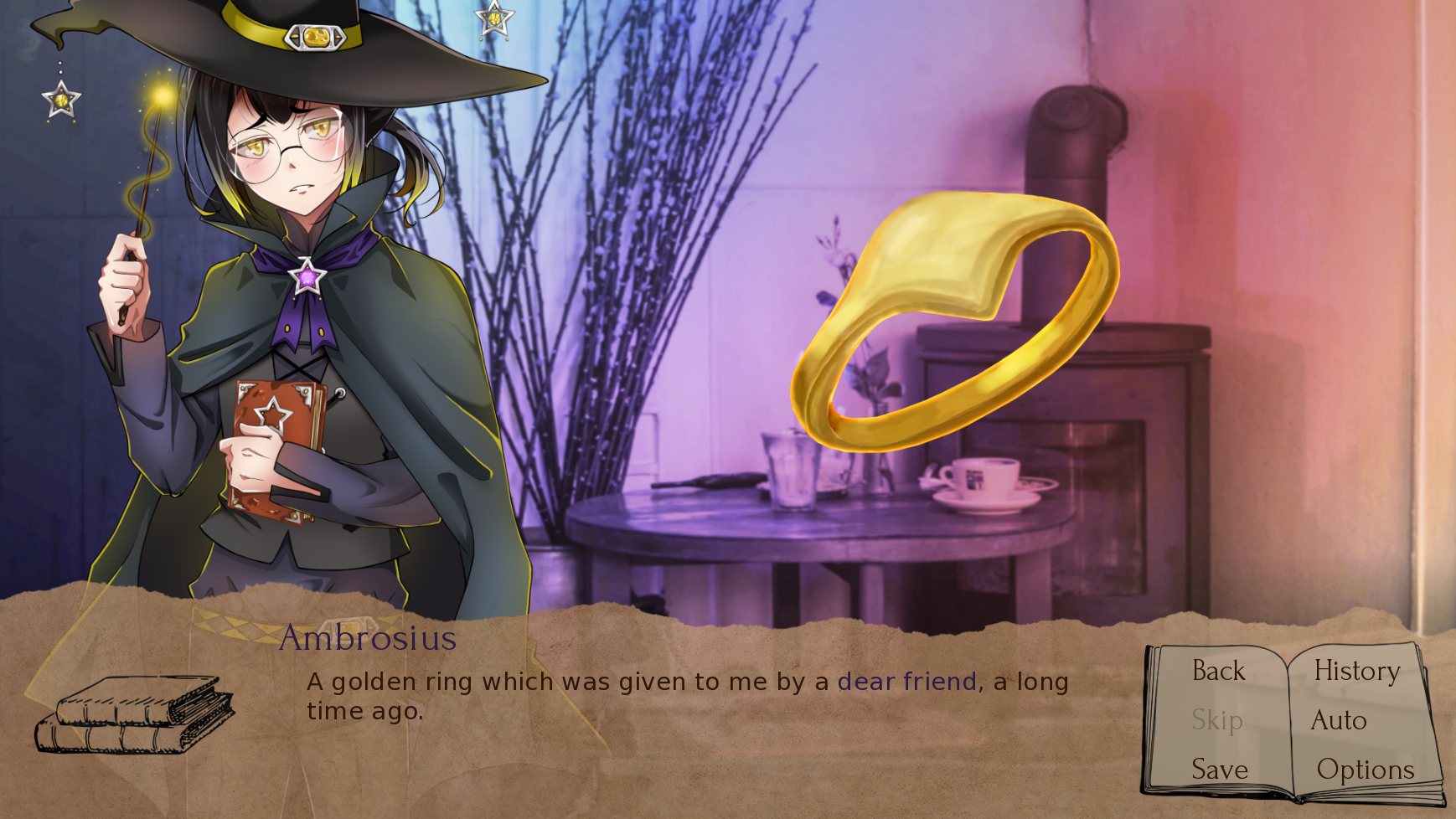 Overall, I’d say that Wizard School Woes is worth checking out if you have some time to spare. You’ll meet an interesting wizard that’ll make you wish there were more games in the same magical world!

You can download Wizard School Woes on itch.io for free.