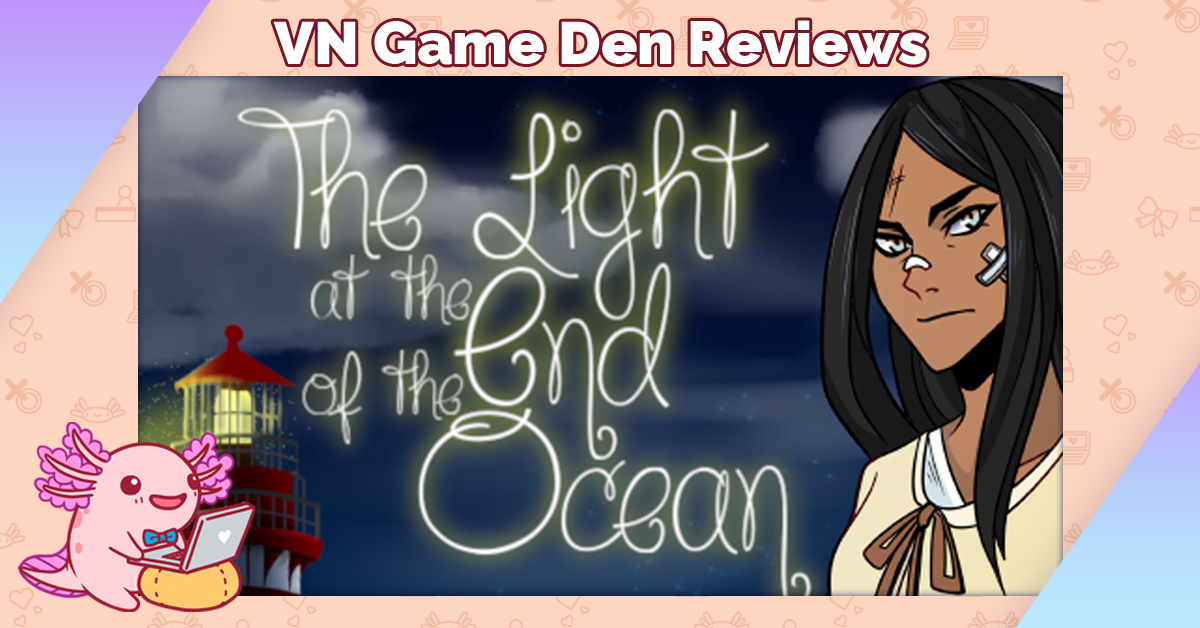 Review: The Light at the End of the Ocean

Light at the End of the Ocean is a point-and-click visual novel about friendship, identity, and destiny.

A young woman washes up at the base of a lighthouse from a shipwreck. With a head injury and missing memories, a mystery arises surrounding this young lady.

A fantastic team led by Jane Titor brings us The Light at the End of the Ocean. Combining fabulism, mythological references, and philosophical ruminations, this mystery visual novel follows the story of the Guest after a shipwreck on a small island deposits her at the base of a lighthouse. The Keeper, with the help of the Archivist, creates more questions than answers as she tries to puzzle out her missing memories and the strange visions and dreams that haunt her waking and sleeping.

After a short intro that reads like an invocation to the muses or a Shakespearean-style narrative foreshadow, the story immediately settles into a comfortably mysterious tone that goes all the way down to the character names. Who is the Guest? Even she doesn’t know, and we have to help her discover the very nature of her existence. At the same time, the game doesn’t feel like it’s purposefully trying to hide things from you. When you meet the Wanderer and the Debutante during a vision, you recognize who the characters are and how they connect to the characters in the “present” of the story. Even the Archivist, the most mysterious character of the three, quickly reveals plenty of hints to get an inkling for how she fits within the narrative universe of the story.

There’s a very elegant and satisfying structure in the central mystery. You’re almost constantly figuring things out just to have them confirmed in some small way. This creates an implicit promise that all the mysteries are going to be solved at some point. When a smaller question, then, comes to the surface and isn’t immediately answered, there’s a level of confidence that it’s going to be at some point. You never feel like you’re going to be left in the dark with mystery for the sake of mystery.

What this cultivates organically is a very strong desire to keep playing. Even when you figure out where you think the ending is going to go, you’re already emotionally invested in the journey. The impetus to finish is powerful enough it could very easily have carried a game several times its length. While at the end it’s hard to know all the places you might have been able to change the story, that desire to keep going transforms itself into replayability to discover all the endings and the additional secrets.

The character art (and presumably CGs) by Dahlia Wilder is stunning. The characters have unique, interesting designs and are extremely expressive. Characters that appear in multiple time periods slip back and forth very easily between their two lives, changing out clothes while still maintaining their intrinsic feel.

Each individual piece of background or scenic art is very well done, especially those that fade between light levels. While the different artists on that team have managed to blend their styles together extremely well, there is still a very occasional inconsistency between scenes, mostly in the very small details and texture work. The vast majority of the time, it’s not enough to create any kind of dissonance or immersion breaking, and I would even venture to admit it’s a bit more nitpicky than the average critique. During the point-and-click interactions, however, you’re spending so much time looking at said backgrounds that it’s difficult not to notice the tiny aesthetic discrepancies. That being said, some of the very small details in some of the backgrounds are absolutely delightful and do a great job at very subtle environmental storytelling.

A Discussion of Life

My strongest takeaway comes in the form of the presented philosophical constructs of existentialism versus determinism versus fatalism and the nature of free-will. Without giving too many secrets away, The Guest, The Keeper, and The Archivist are all tangled up in this broad discussion of what we can expect from the universe and what the universe expects of us. The game endeavors to make you think about how much control you have over your life, how you can change it, how maybe you can’t, or how forces beyond your control might be pressing on you without you ever knowing. The Guest feels trapped, unsure, and out of control of her current situation, just biding her time to see what happens next. The Keeper, on the other hand, feels like they solely bear responsibility for The Guest’s fate, and lets that weight sit on her shoulders, fearing what it’s done.

All in all, The Light at the End of the Ocean is a story of friendship, identity, and destiny couched in a delicate blend of modern, traditional, and classical sensibilities. Despite taking place in one location, it reaches across time and space to tell a story both nuanced and universal about the heartbreaks that bring us to the most difficult of choices, all the paths we might have taken in between, and finding a way to open ourselves to second chances.

Purchase Light at the End of the Ocean at itch.io here.