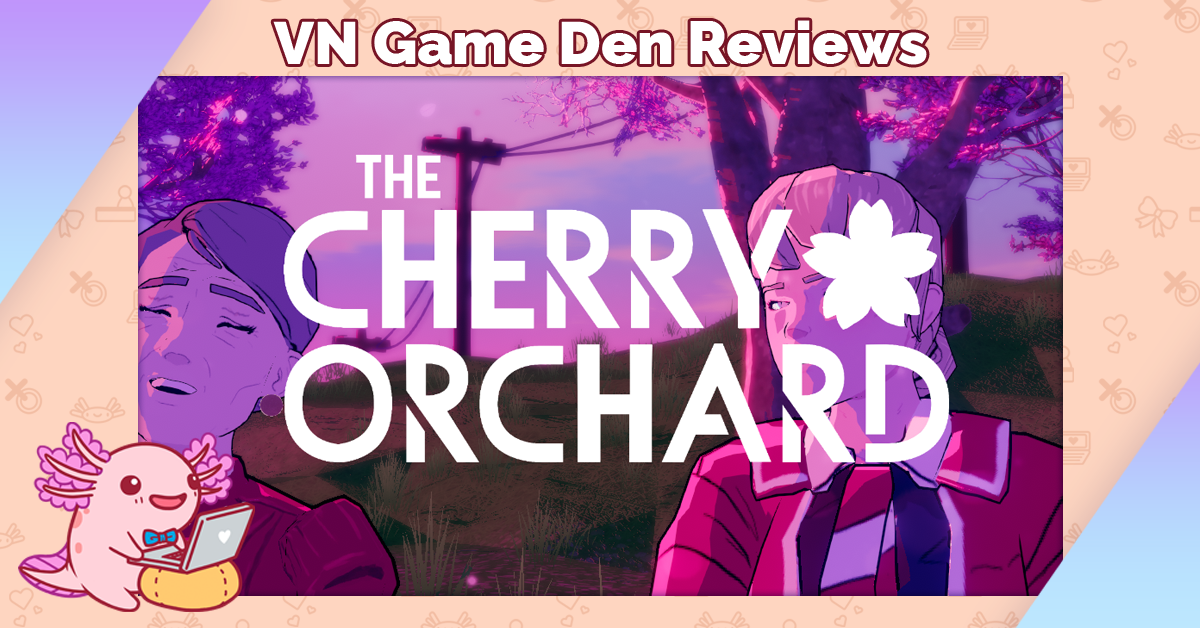 Follow Hermes Lopakhin and others in this modern adaptation of the original 1903 play of the same title by Anton Chekhov.

The Cherry Orchard is a fully real-time 3D kinetic novel developed by Team Dogpit. Follow Hermes Lopakhin and others in this modern adaptation of the original 1903 play of the same title by Anton Chekhov.

An advance copy of the game was provided to us by the developer. 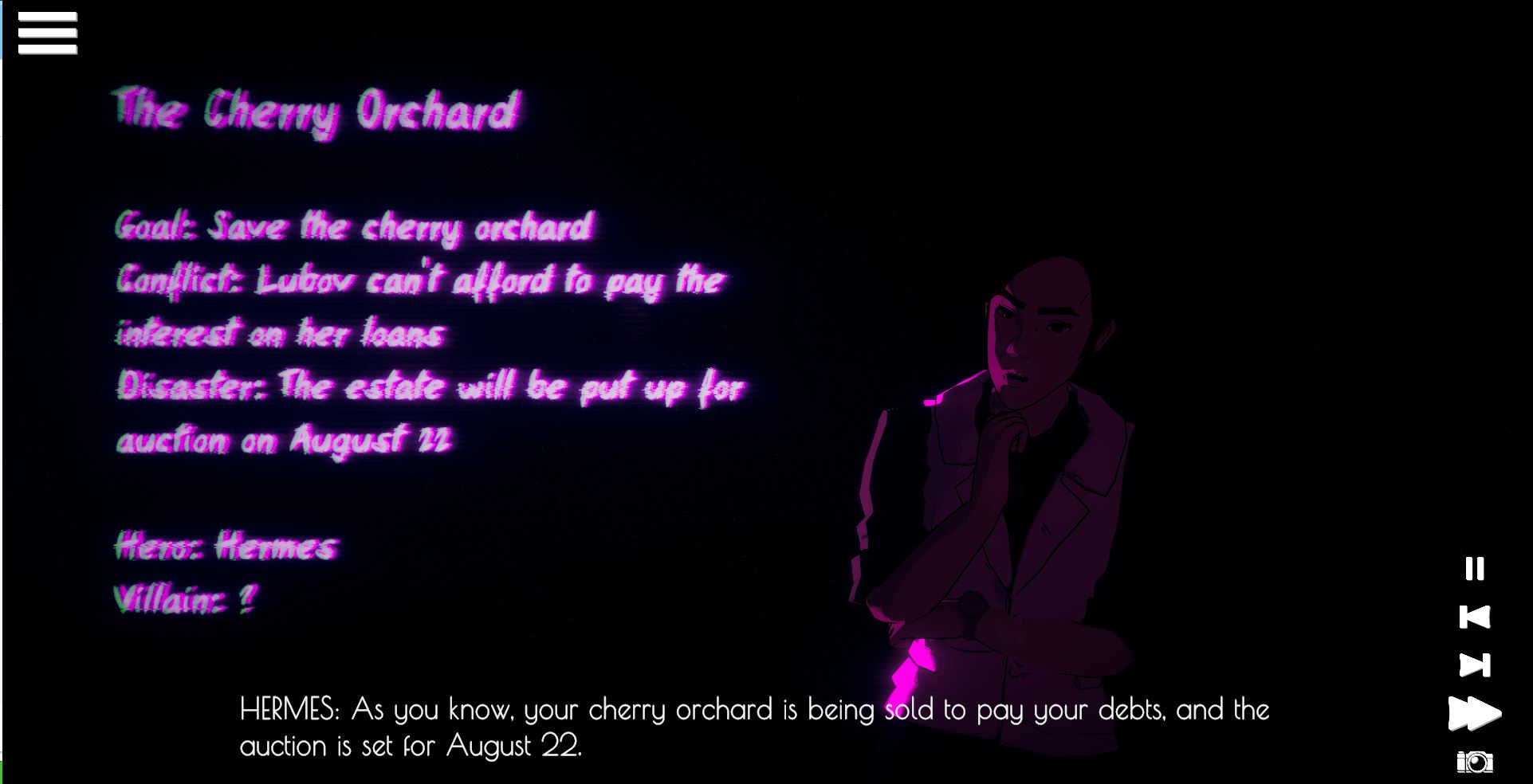 Team Dogpit takes the original plot of The Cherry Orchard by Anton Chekhov and condenses it into a modern one-hour retelling. The game itself very much operates like a play. The entirety of the story can be played through without clicking a single button beyond starting the game.

While there are visual novel segments, the action is mostly animated, with the characters moving about as they talk. This is incredibly helpful, as it eliminates the need for constant narration. It leaves the player feeling fully immersed in the plot with almost no pauses or distractions. 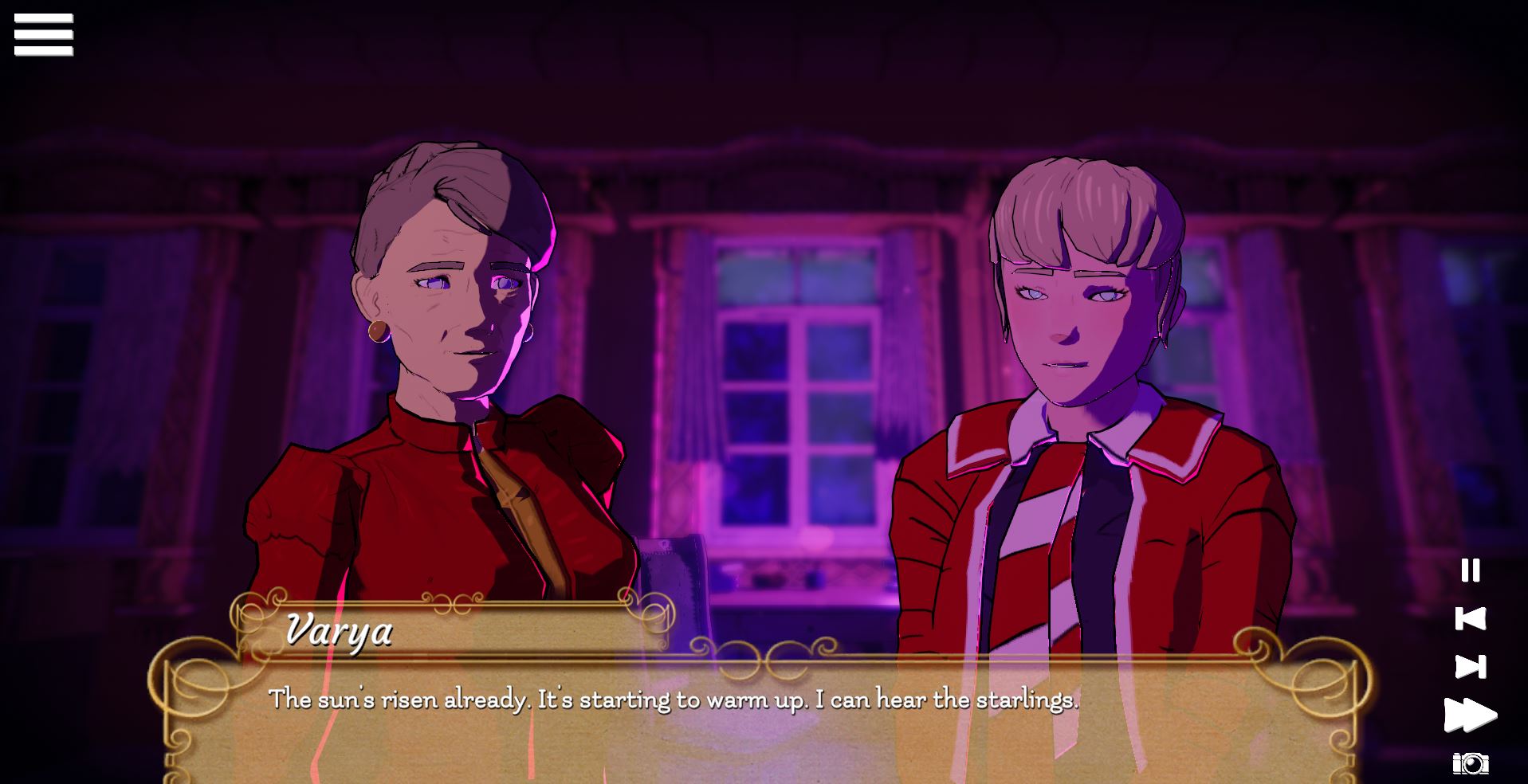 Never having read Chekhov’s play myself, I can attest that no knowledge of the original source is needed to enjoy the story in its entirety. The information we need is presented to us via visual cues as the characters and world morph and change to fit the tone of the play.

We meet four central characters throughout, each having their own motivations and feelings regarding the cherry orchard (and each other). They feel entirely real, and though we only get a small glimpse into their lives, one can’t help but feel attached to them as they navigate their plight. 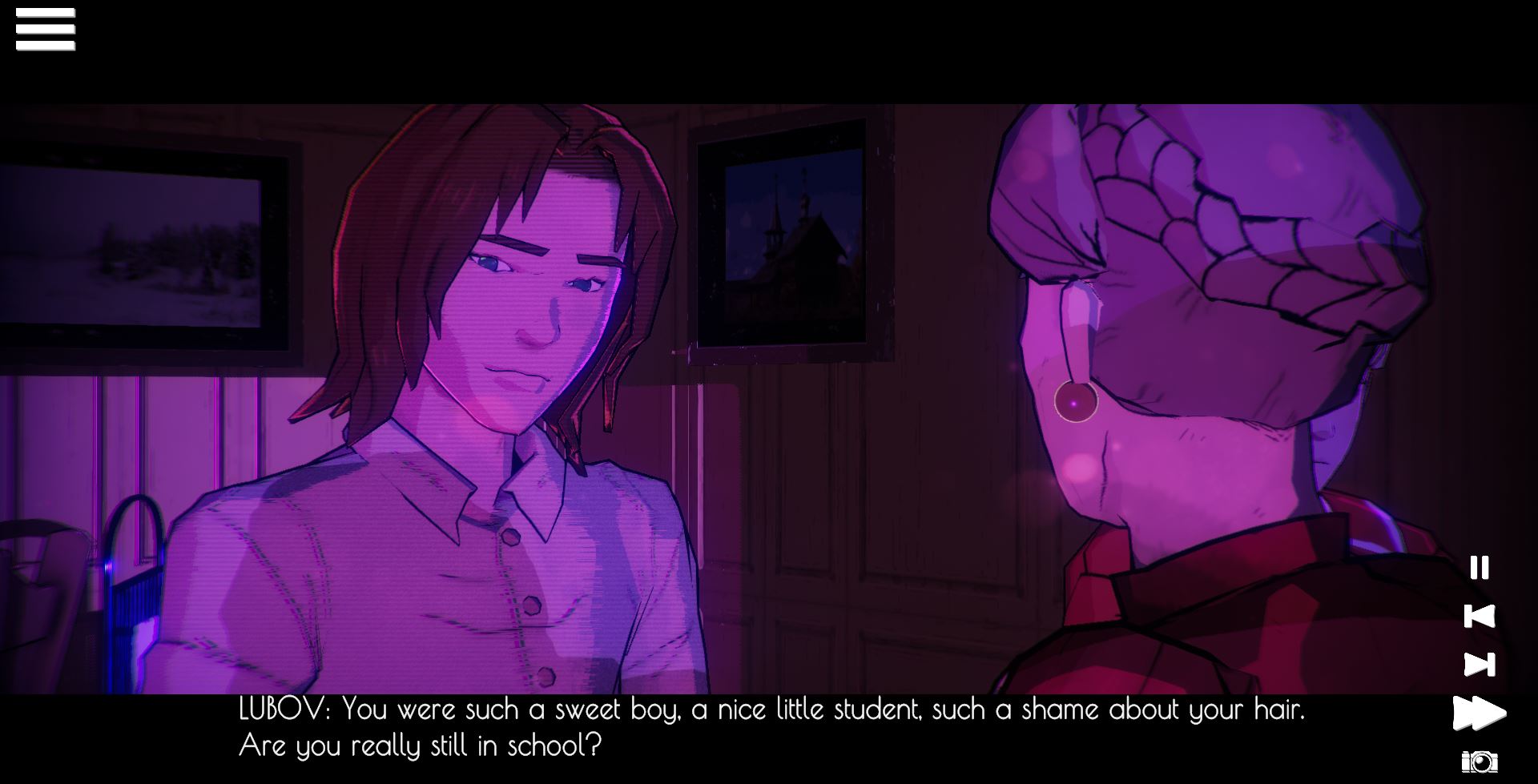 The characters aren’t one-dimensional—morally or immorally flat. Rather, there are gray areas which each resides in. Their outlooks on life, their hopes and dreams for the future, and their inner torment are all intertwined, giving the story a feeling of humanity.

The vaporwave aesthetic is an interesting and unique element. The music, the graphics, and the color scheme all work to give the play a transformative and wholly modern feel. I’d compare the experience to watching a movie unfold with several interesting effects, heart-pounding music, and fluid character animations. 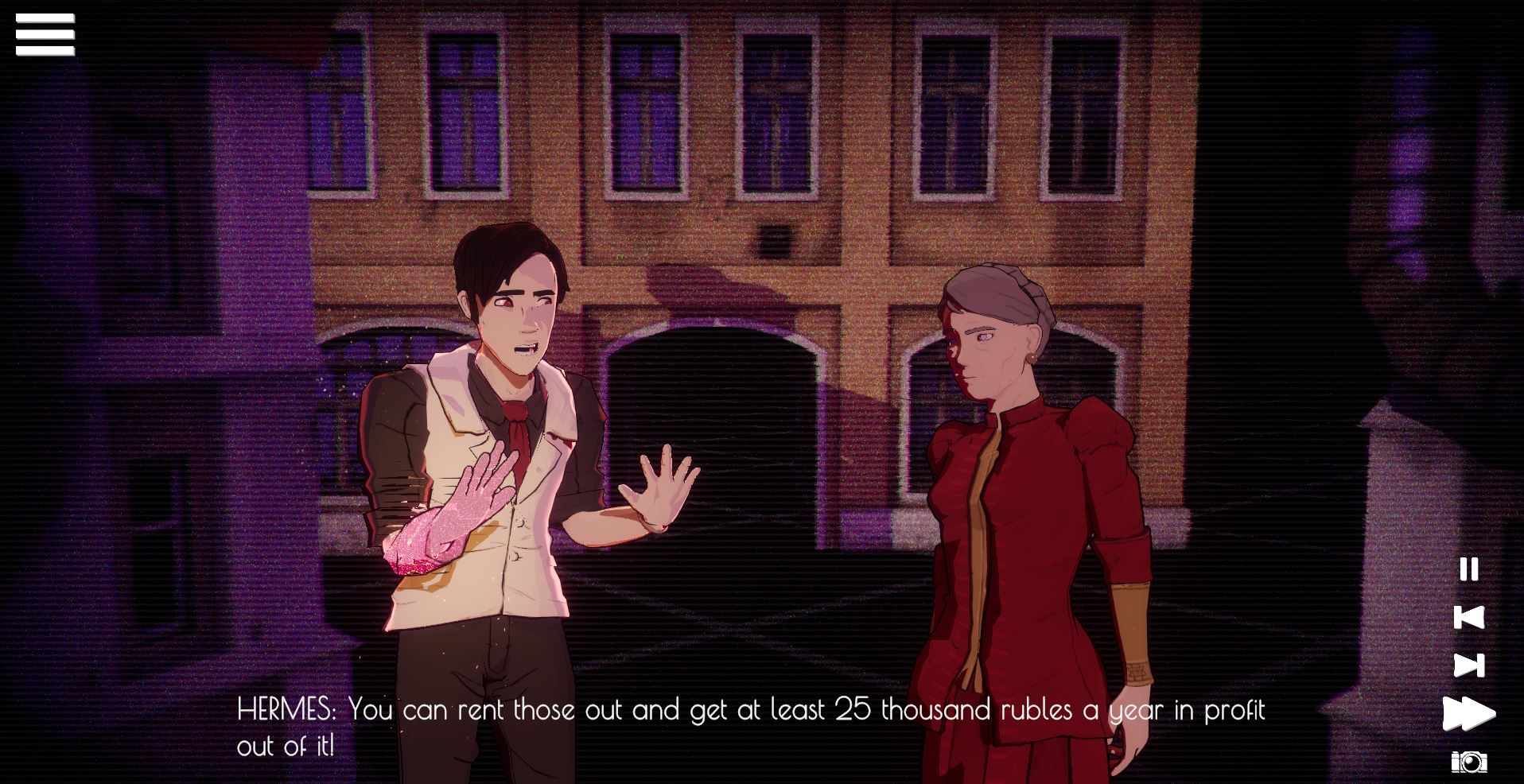 The shining star of The Cherry Orchard is by far the incredible voice acting cast. The game is fully voiced and not a single line falls short of their intended character. This may be because the voice acting sessions were done as a group rather than each character individually.

The voice acting is what makes the game feel more approachable. Though some may be intimidated by the old source material, I can assure you that the dialogue is delivered in such a way that the story isn’t muddled or overly complicated. 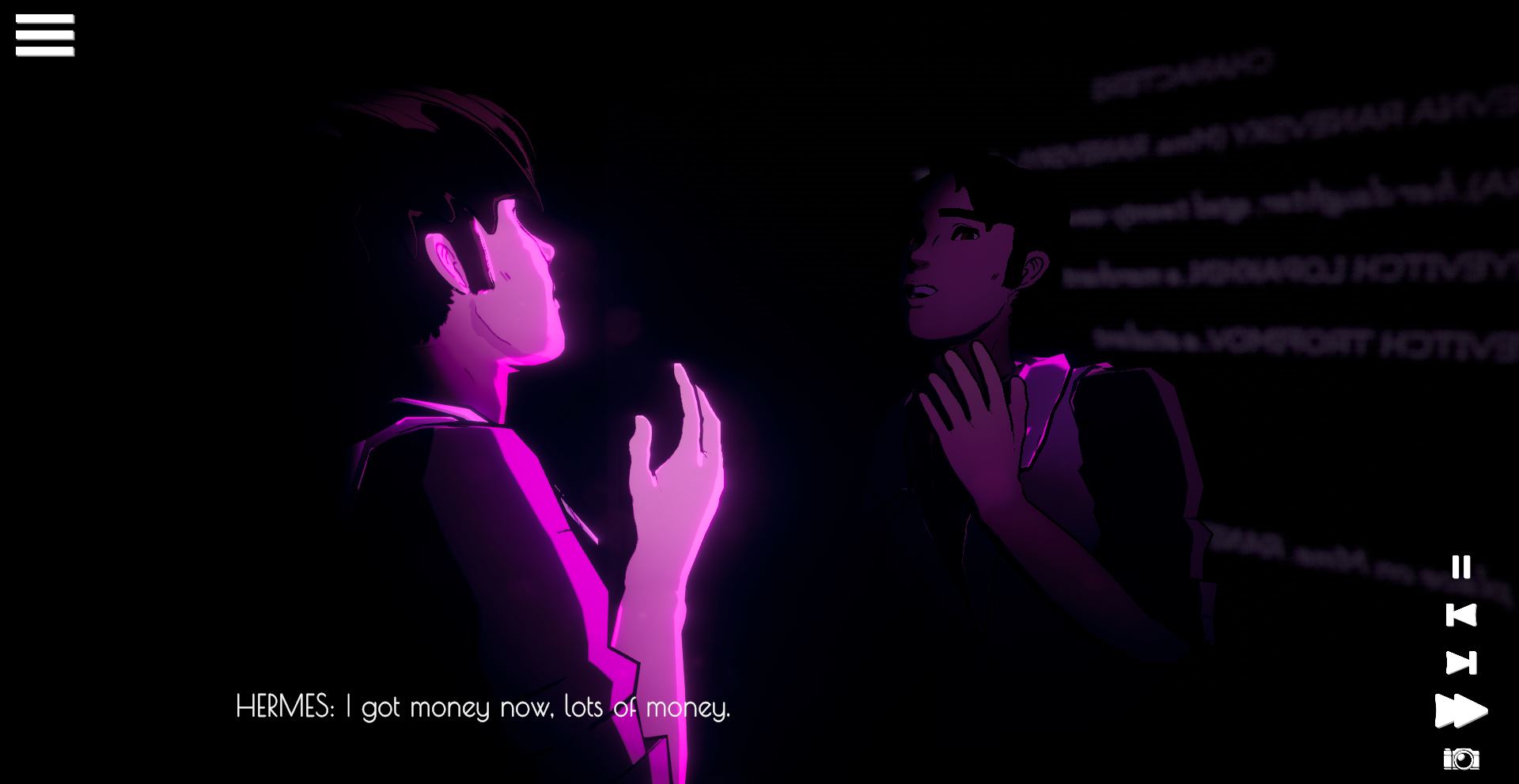 I very much appreciate how the developers tried to create the feeling of watching a play from the comfort of the player’s home, yet still managing to provide a new and enchanting experience. That being said, my only real complaint about The Cherry Orchard (aside from minor bugs and audio leveling which I’m sure will be fixed in the final version) is that it left me wanting more. While the play introduces and solves the conflict, there is room to add in more scenes to help flesh out the characters a bit more.

All in all I’d recommend picking up The Cherry Orchard on itch.io or Steam if you have an hour to spare and a nice warm drink on hand!