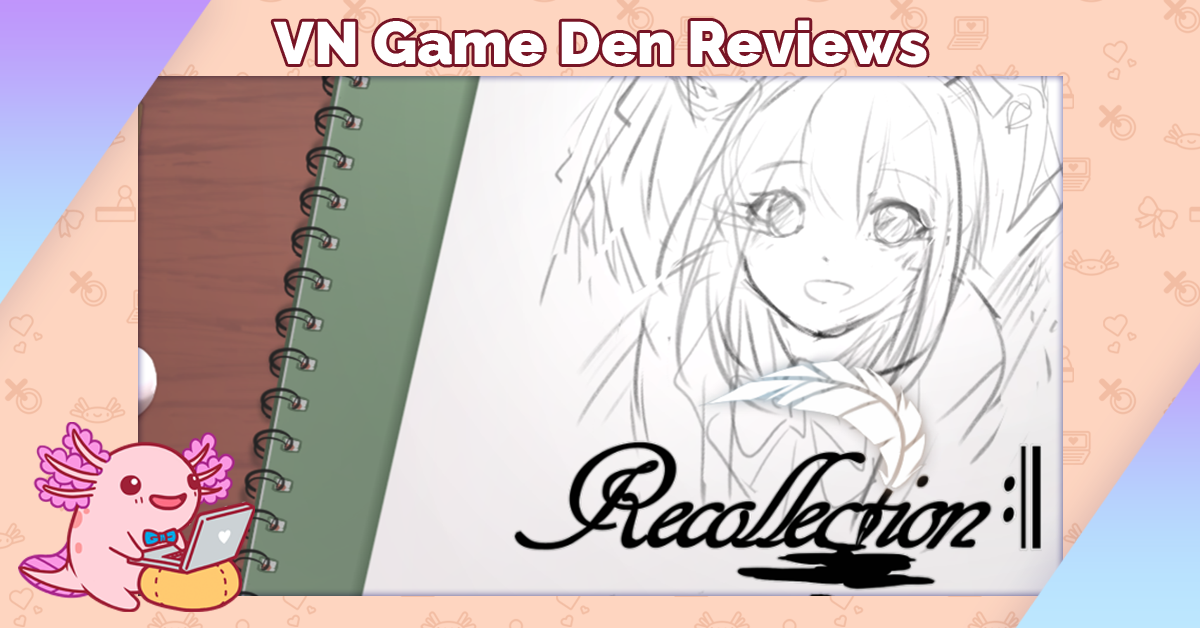 Recollection 𝄇 tells the story of introvert David as he meets what will become his long-time friends Ringo and Shuuichi in art club.

Recollection 𝄇 (or Recollection Repeat) from Kimiyoto is a prequel to their game Recollection and gives some backstory on those characters in their school days. It was made for NaNoRenO 2020. Short and sweet, it tells the story of introvert David as he meets, presumably, what will become his long-time friends Ringo and Shuuichi in art club.

This game was requested through the VN Game Den review request form.

Recollection Repeat is a prequel to a previous release simply titled Recollection. The game page says it’s playable without previous knowledge of the original game, so that’s the perspective that I took as a player, experiencing the game as a stand-alone product. It works great on its own. Each of the characters, their arcs, and the overall story are self-contained and stands on their own two feet.

It’s a very small, unpretentious game, that generally benefits from its own simplicity. It’s very character-centric, and the game is set up in a way that an inter-social conflict could work well. The characters themselves, though, run a little bland. The main character has a very strong inner monologue with a very distinct voice, but I’d be hesitant to call him likable or charming.

There’s a very heavy heaping of edgy teen tryhard in his thought process, which, in itself, is fine and even realistic. But I’m not left with the feeling he actually learned anything by the end of the story. His pedantic insistence to his classmates that this is the right way to do things is rewarded. He doesn’t have to actively change anything about himself to keep his friends. It’s fairly evident that his tutorializing is part of his “friendship language” from a meta perspective, but he’s still really annoying about it, to the point where I have a hard time understanding why his friends even want him around if this is how he acts. Maybe there’s considerable growth in the next game, but even as someone who shares many of his personality traits (perhaps even because I’m someone who shares these personality traits), I don’t find him to be particularly sympathetic, even at the end of his minimal arc. The characters of Ringo and Shuuichi, the friends from art club, are also rather flat as characters. They didn’t stick with me after the game was over. Even in such a short game, the developer could have taken some time to really introduce me to these kids.

They story is also a bit tricky to pin down because I’m not entirely sure anything actually happened. David manufacturers the central conflict out of whole cloth within his own mind. There’s no outside force imposing any extra stress that would make this sort of conflict feel like it had weight. He just gets mad, throws a hissy fit, then feels sad about it later. While “man vs self” is obviously a perfectly acceptable conflict structure, the way this one is written just feels, frankly, lame.

While the character voice and dialogue is competently written, the rest of it’s a little lackluster. It doesn’t smoothly transition from scene to scene and its understanding of its own space and time is rough around the edges. It also shifts between tenses sometimes, betraying a lack of adequate secondary editing or beta reading.

Visually it’s a bit of a mixed bag, as well. The sprites and CGs are adorable, and the characters are very visually charming. The backgrounds are inconsistent, though. Of the five, three are drawn in-style, and two look like photographic manipulations, but achieved in different ways. The two backgrounds the player spends the most time in are the ones that are the least polished-looking. The UI is very neat and high-concept, but it could benefit from slight tweaks like making sure there’s a return button on the in-game settings menu to get back to the main game. This is all a bit of a shame, because the bespoke assets are really cute and very well done. But that extra bit of polish really stands out and casts a bit of an unfinished pallor over the rest of it.

Recollection 𝄇 is an okay game and probably on par for what one could expect of a jam game. It fails, though, in one of the ways that matters for a prequel game in that it doesn’t make me want to play the original game. By itself, though, it’s a perfectly serviceable game and a fun little excursion.