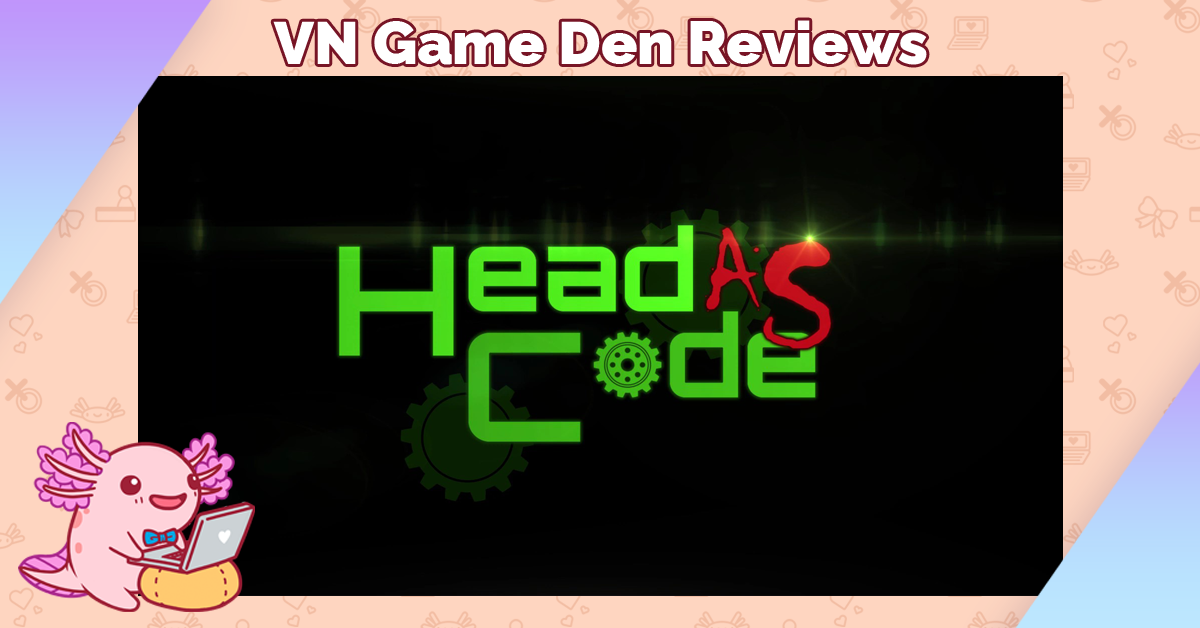 Eight people find themselves trapped, and a mysterious figure tells them they must solve the puzzles in the rooms ahead and find the ninth person in order to leave with their lives. Let’s take a look at another deadly game in this visual novel remake.

Head AS Code is a new remake of a visual novel with the same name released a few years ago. It begins with the protagonist, Simon, waking up to discover that something is definitely wrong, although he can’t remember what happened or how he got there. Soon he learns that he and a total of seven others are all participants in a deadly game known as the Dating Game, in which they must explore in pairs and search for an unknown ninth person in order to leave. If they break the rules or fail to win, the penalty is death.

After some dramatic scenes, Simon begins to remember something, and the story goes back to the start of how he and the others ended up in this situation. The opening section with his amnesia feels a little odd. It works with the story, but the awkwardness of him pretending he knows what’s going on and getting a summarized version of the game from his childhood friend makes those events feel a little rushed, especially since we then get to see the start of the scenario anyway.

Head AS Code is primarily a visual novel, but there are light adventure game segments. At certain points in the game, you’ll be able to examine or interact with objects in the background, as well as talk to characters in some situations. It is very friendly about telling you when your actions will cause the story to progress, and if you repeat the scene, anything you’ve interacted with is marked to make it easier if you’re trying to see every option or all the dialogue. Some interactions are required to continue, while others just result in extra dialogue or jokes. There are certain situations where you can only choose some of the actions or conversations before continuing, but again, this is made clear ahead of time.

However, despite this adventure game setup and the characters going through a number of “escape room” situations in which they must solve a puzzle in order to get a code and leave, the player doesn’t really get to do much of that. There are a handful of puzzles for the player to actually solve, but it’s more common that the characters will talk about the puzzle and solve it themselves through dialogue. Instead, the main form of gameplay for the player comes from making different choices to follow different paths.

The start of the story up through the first ending is a linear section with no choices, which makes narrative sense but also can give a misleading impression of what the game will be like. After that point, you gain access to the game’s flowchart to see the available branches and can return to any point in order to make different decisions. Each choice leads to a new branch or ending, allowing the player to see how the story events change when things play out differently and learn more about different characters by changing who Simon accompanies.

Certain endings unlock new branches, although this doesn’t always feel logical. For example, Simon might debate between two options, only for you not to have a choice there until you see a different ending and then can return to choose the other option that Simon had just been thinking about anyway. It makes it feel odd from a story perspective, although mechanically it’s quite satisfying to unlock new outcomes and work your way through the flowchart.

Details about the story are gradually revealed, and it’s an intriguing mystery with entertaining characters and banter. The conclusion felt a bit contrived to me, partly due to a long explanation involving a philosophical concept, but it did answer the game’s major mysteries in a satisfactory way. Some parts are left ambiguous, most likely because Head AS Code has a sequel that came out last year, but in general it stands on its own as an entertaining take on this particular death game visual novel style.

You can buy Head AS Code from Steam or itch.io.