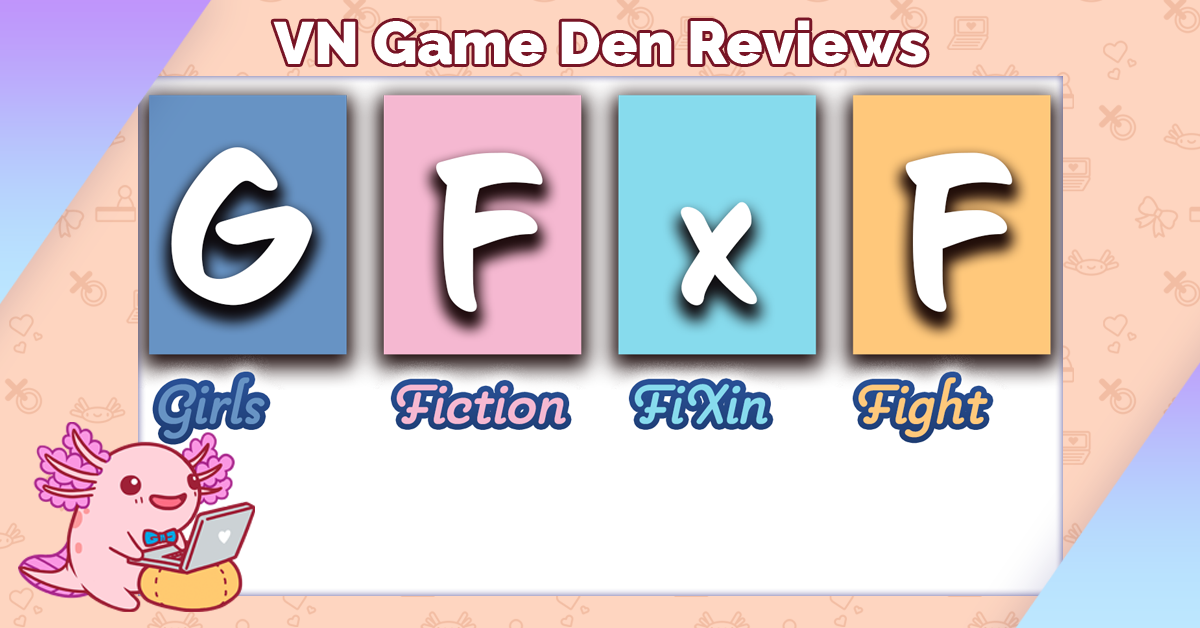 When college student Mona with ulterior motives joins a club dedicated to the discussion of yuri media, she doesn’t expect to be so overwhelmed by these two juggernauts of media dissection. As she listens to Hana and Riley go at it verbally, she finds time to self-reflect on her own relationship with her sexuality and neurodiversity.

From punishedhag, GFxF: Girls Fiction FiXin Fight is a otaku-flavored Yuri Jam 2020 submission. When college student Mona with ulterior motives joins a club dedicated to the discussion of yuri media, she doesn’t expect to be so overwhelmed by these two juggernauts of media dissection. As she listens to Hana and Riley go at it verbally, she finds time to self-reflect on her own relationship with her sexuality and neurodiversity.

The art itself is simple but effective. The starting shapes between the characters are evident in their overall form, but the final designs are charming and fun. The contrast between the punky Riley, the fluffy Hana, and the more reserved Mona makes the small cast pop. All three girls are also very expressive with positional movement and occasional shudders and bumps across the screen. The few CGs are very cute, well-composed, and have a bit of a sketchy feel that pairs well with the overall lighthearted endings.

With jam games, there’s a certain understanding that some aspects will be unpolished, and unfortunately, this game doesn’t escape that expectation. With how much work was put into the sprites, the backgrounds and UI are certainly in a rough state. They do have these really fun little corporate-synergy-esque graphic sections, though, that are super funny in the context of an anime rant. It’s a very clever way of creating visual interest in sections that can grow a little long and wordy.

Those sections of writing are, however, part of what makes the writing as a whole hard to form a singular opinion on. Overall, the text is snappy and smart. Riley and Hana have strong character voices and opinions on all things yuri and anime. The story itself is built around these fairly long YouTube-rant-style discussions of representation and feminism in Japanese pop media. The screeds are very intelligently written and actually do a very excellent job of breaking down the points of contention from both sides. Hana and Riley make excellent mouthpieces for opposing ideas and opinions. The thing is, though, that’s a solid 70%-80% of the game. It just goes from rant to rant to rant with a very thin plot to bring it all together. That doesn’t mean it’s not an enjoyable reading experience (you do get to know the girls very well though the conversations), but you just have to go into it with the expectation that not much really happens.

The majority of the narrative conflict is internal to Mona, and that creates a tricky situation as well. She has a very strong internal voice. There’s also a very sad earnestness to her. The way she thinks is very grim, but very real, and it’s an interesting contrast to the overall comedic feel of the rest of the game in a broad sense. At first, I was able to sympathize with her despite the grossness of the thought process that brought her to the anime club to begin with. We’re not perfect as people. We do gross things. She never really confronts it, though, either internally or via external pressure. Her breaking point doesn’t come when she finally faces her problematic tendencies. It is sparked by the fear that reality is different than her internal fantasy which is an aspect of her poor thinking, but she doesn’t ever really work through that. Not that I’m expecting every game to have a cut-and-dry moral framework, but I feel like this particular game almost misses its own point. Mona never really gets called out for her specific problematic thought processes and behaviors (she’s validated, even, in a small way), she never has to face the ramifications of those behaviors, she never grows, and the happily ever after feels weird as a result. I also have a hard time, personally, understanding why, when Mona’s motivations are revealed, Hana and Riley aren’t more creeped out by what is an objectively very obscene thought process on Mona’s part. So that ends up being the one thing that sort of puts a pallor over otherwise good writing in the end.

GFxF is a fun little game with a solid blend of serious subject matters, slice-of-life shenanigans, and weeb enthusiasm. Some parts are executed better than others, but it’s a genuinely heartfelt piece that feels like it has a lot of the creators in it.