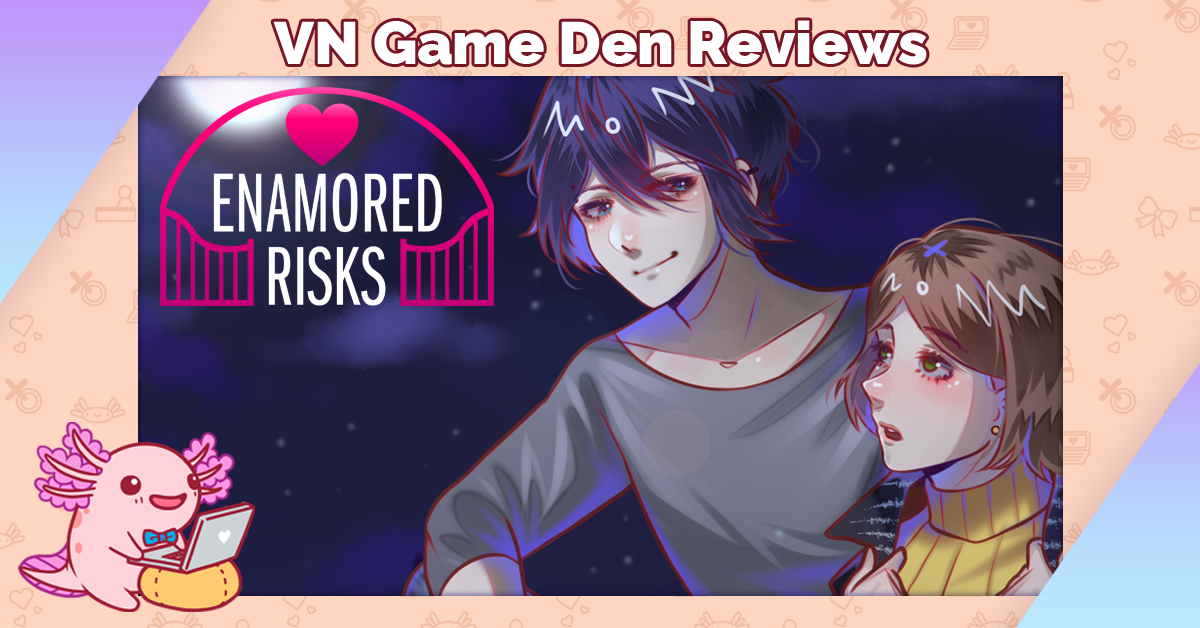 Enamored Risks is an otome visual novel featured during NaNoRenO 2020. Read our review about this uplifting visual novel!

Enamored Risks, from Crystal Game Works, is an otome game created in a month and a half for NaNoRenO 2020. It follows the story of Alex, a college nursing student struggling with unreasonable academic expectations from her parents, work-life balance, and her own self-worth. Tempted by photos of decaying architecture posted by a mysterious social media account, she turns to urban exploration following a spark of curiosity. After a dangerous run-in in an abandoned hospital, she’s recruited by a team of fellow explorers: Finn, an affable goth classmate; Paxton, a secret jock and tabletop RPG aficionado; and Zaina, a photographer with an edge. Through exploring buildings with her new friends, Alex discovers herself and helps the others break down their own motivations.

With soft, expressive eyes and delicate features, the sprite art is evocative and painterly, laying the reference point for an overall aesthetic that walks the line between grounded and airy with a touch of real-life whimsy. Though distinctly modern in illustrative style, the fashion and physical attitude of the characters and the occasional dips into pinks and yellows kept flashing me with a late-’90s/early-aughts vibe that almost pulls the characters out of a distinctive era, lending a feel of timelessness to it.

Colorful midtones and gentle line work anchor the characters to the background art, suggesting a cohesion that—while occasionally lacking in visual contrast—creates a feeling of realness and livability. Small details in the backgrounds, especially the characters’ apartments, act as elegant but simple environmental storytelling cues and further create a lived-in universe.

While the transitions into the CGs made by different artists can be a little jarring at times, the CGs themselves are moody and expressive. They do an excellent job of capturing the totality of a moment and come along at just the right times to snapshot important, defining scenes.

Living Characters in a Living World

Alex, as a main character, is intimately relatable. The core of her struggle lies in her conflict with her parents which, in turn, is centered around her academics. While this doesn’t mean that she doesn’t also want to be academically successful, the underlying self-conflict is in wanting more than good grades. This is the driving force behind the reckless decisions early on in the game that ultimately get the story rolling. Her inner monologue is very strong, and while she lacks some of the finer details seen in the love interests, her experience is the right kind of universal to create a natural bridge between player and character without seeming bland or one-dimensional.

She finds herself, in part, by lending aid to those on her urban exploration team. Each love interest is a fully fleshed-out, rich character with their own struggles, hopes, dreams, and ambitions. While some media achieve this by using an archetype as a springboard and blossom from there, I found that Enamored Risks only barely touches that launchpad before moving on quickly into revealing how full-featured the love interests are. A lot of this is in the aforementioned very, very small details of the characters. Finn’s eyeliner. Paxton’s latte art. Zaina’s insistence that no way she totally didn’t post a Halloween selfie to the group chat, they all need to shut up right now. Their interactions with each other read like the long-time friends they are, and you can sense the ease and comfort they share with each other.

Additionally, the characters don’t shy away from tough, adult conversations about mental health and how mental illness affects their day-to-day actions. Their struggles are very real without being simply about those mental illnesses. I also appreciate the casual queer representation present in the characters, our protagonist included, even when in scenes where it could easily have been left out of her character. It’s a holistic approach that shows these things as being intrinsically integral to the characters, not a side-thought added after the fact.

While the game comes in strong with the character-driven storytelling, that focus on the “small story” almost works to its detriment in the long run. While it’s not uncommon in visual novels to get sort of uneven exposure to the characters, I really feel you get far more Finn in the main story than you do the other two, especially in the beginning. While the breakaway scenes give you more time with Zaina and Paxton, I feel like you don’t get nearly as much time to get to know them before having to make those plot-splitting decisions.

You can also tell where the writers particularly like writing certain styles of scenes, and I feel like they favored them at the expense of what I thought to be more central-narrative-relevant sections of the story. There were also a few narrative through lines I thought could have had a little more substance attached to them so their final payoff was a little more substantial.

Overall, Enamored Risks has a wonderful feel to it. You can’t help but love the characters, and the combination of art, overall mood, and music creates a proper wave of tension and ease (romantic and otherwise) that flows out to an ultimately hopeful and uplifting experience.

You can play Enamored Risks for free on both Steam and Itch.io.