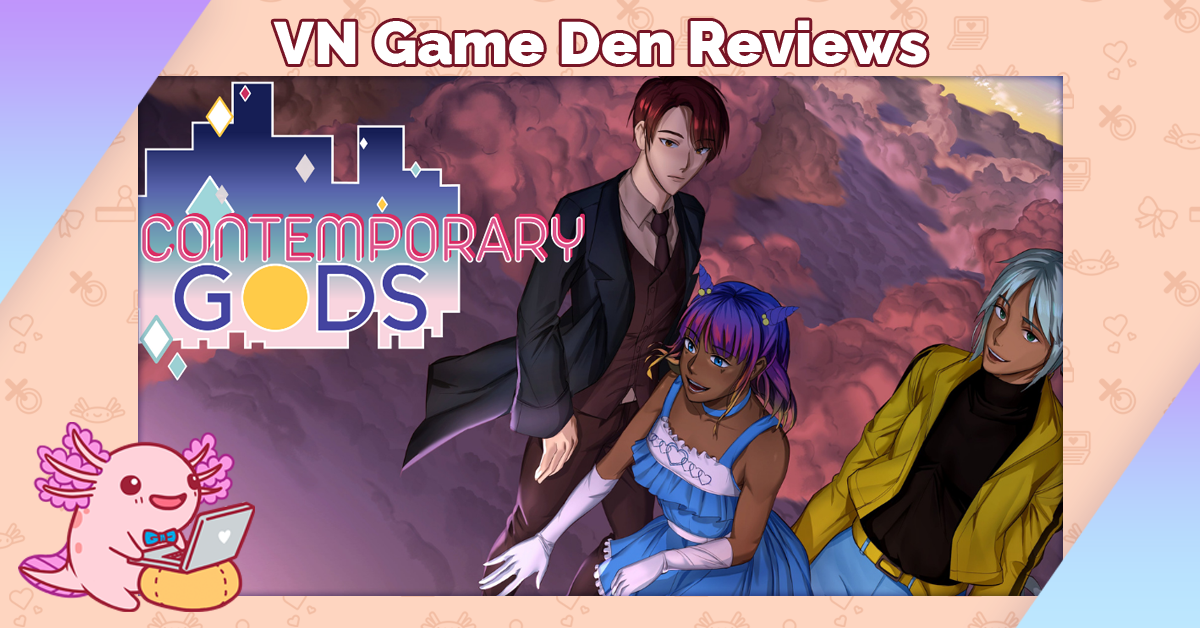 You materialize as the God of Unity. As the world and the ethereal realms it’s connected to start to fall apart, you’re set the monumental task of fixing the universe by bringing together the three most troublesome gods: Social Media, Capitalism, and Identity. Among the many problems, however, is that they absolutely hate each other. Can you help them come to an understanding for the betterment of the human race?

In Contemporary Gods from Forget-Me-Not Games (made for NaNoRenO 2021), you materialize as the God of Unity. As the world and the ethereal realms it’s connected to start to fall apart, you’re set the monumental task of fixing the universe by bringing together the three most troublesome gods: Social Media, Capitalism, and Identity. Among the many problems, however, is that they absolutely hate each other. Can you help them come to an understanding for the betterment of the human race?

With fun, interesting character designs, the art still comes with some of the hallmarks of a short development time while still making great use of what they have. The flat style, far from being unpolished, feels otherworldly. These characters are gods, and they feel like they visually exist outside the mortal realm. There’s an untethered quality to them that works with the story. That being said, they are a bit technically imperfect, but not to such a degree that it detracts from the overall experience.

They took an interesting approach with the backgrounds. It’s not uncommon during jam-length development timelines to see shortcuts in this area. It is evident that they used one of those short cuts—namely, photographic manipulation. However, given the specific way they approached it and how it pairs with the sprite art, as a background to the unearthly story being told, it works exceptionally well. Where it could feel lazy in other circumstances, it feels like an active stylistic choice in this game. It feels like it fits.

The UI is simple yet effective, and it does some really cute things with the name boxes for the main characters. The CGs are cute and convey a lovely amount of emotion. The customization (in both appearance and pronouns) is a fun addition that makes the game feel homier. So despite any minor flaws, it has a wonderful overall visual feel to it.

The writing is a little harder to pin down. The individual characters have distinct voices and intriguing personalities. The overall narrative concept is fantastic. The idea of gods being attached to human activity and emotion (instead of the other way around) is always a fascinating concept to play in, and this game is no different in that regard. The execution, though, can be a little heavy with its metaphors, however, and some scenes are a little more inelegant than others. There are some extremely well-crafted discussions of collectivism, cooperation, and the nature of humanity. They occasionally get buried, however, under something like Mesmeri’s hyper-relevant internet references. Or they get dragged through a crushingly long semi-philosophical debate.

It’s ostensibly a character- and dialogue-driven game. That dialogue can grow horribly long in the tooth, however, and read like a Socratic seminar. So it ends up feeling like a game that knows what it wants to say, and has something interesting to say, but doesn’t always know how to present it in an entertaining fashion. It sets up an incredibly strong premise, then explores it through, more than anything, drifting from conversation to conversation without always feeling like it’s actually moving in a forward direction. While it’s not an unenjoyable read and it’s structurally extremely well-written, it does feel like there’s something missing to tie it all together into a truly compelling story.

This is a game that knew what it wanted to do and set about executing it within the timeframe set for it, and did a mostly effective job of that. It’s heartfelt and intelligent. It asks a lot of thought-provoking, existential questions without feeling the need to answer them. It recognizes its own depth and shoots for a happy medium. It’s perfect for someone looking for a more intellectual read that’s a little out of the ordinary.